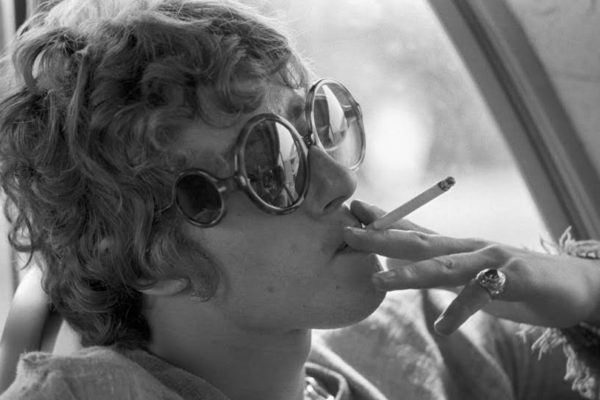 When you think of rock n’ roll’s British Invasion in the 1960s, images of the Beatles on Ed Sullivan or playing to a hysterical crowd at Shea Stadium probably come to mind. Yet while NYC might have gotten the first live glimpse of the Fab Four and other bands of that era, rock history was happening all over the USA. Take St. Louis where photographer Tom Morton spent a good portion of the decade photographing those musicians. As a young adult, Morton “became quite fascinated with photography” and “started playing freelance photographer” as he put it, which turned into quite a successful career for a teen magazine called Prom.*

Throughout the ’50s and ’60s, Prom was connecting — and marketing to — nearly 100 high schools in the St. Louis metropolitan area by enlisting the city’s high school kids as reporters then pairing them with professional photographers — like Morton — to provide the visuals. “The gimmick of the magazine,” noted Morton, led to “increased advertising sales” for Prom as brands were clamoring to reach the area’s adolescent music-loving demographic.

Unlike the teens, Morton wasn’t concerned with who was cooler: Mick Jagger or John Lennon. Ten years older than the budding journalists whom he accompanied to concerts and related locales, he wasn’t about to get a mop top. Even so, he was a talented chronicler of some of the greatest rock bands of all time, capturing performances and lighthearted offstage moments of The Rolling Stones, The Monkees, and The Who.

You may think you’ve seen The Beatles from every possible angle but on a Sunday in August 1966, Morton’s shots of the frenzied crowd at Busch Stadium documents a fairly atypical day in the life of the Fab Four. “The Beatles did two concerts that day, due to the ‘rain-out’ and were in and out of St. Louis quickly,” noted Morton. He may not have had the full access to the band that he wished but his shots of that concert show John, Paul, George, and Ringo (hatted like The Wild One‘s Marlon Brando or The Captain without Tennille) performing something akin to a musical marathon.

Morton had greater access to The Who and Herman’s Hermits when their joint tour came to town in 1967. His pictures of Pete Townshend relaxing with Peter Noone on a tour bus now look like the quintessence of cool. Believe it or not, The Who were the opening act here and Herman’s Hermits, the headliners. But there was nothing elitist about Noone and company. On the contrary, Morton recalls having an enjoyable breakfast with the guys at a Holiday Inn coffee shop where he snapped a photo of the lead singer “drawing a hermit on a fan’s shirt while signing an autograph.” Another memorable shot shows a fan holding up a clearly homemade sign proclaiming “Mrs. Noone you’ve got a lovely son,” a playful reworking of one of the band’s most famous lyrics.

Many of Morton’s photographs were never published. That’s about to change thanks to curator Jeff Hochberg, shown with Tom below, whose 15-year odyssey led him to several caches of rare images. Jeff is releasing a limited number of archival prints, starting with Tom’s.

For anyone who grew up in the late 1960s, Morton’s black-and-white pics detail the look and feel of a generation outside the premeditated gloss and pose of NYC. There’s an intimacy here, a midwestern directness, that makes the shots worth the long wait.

You can see, and buy, many of Tom’s photo of bands like The Beatles, The Who, and Herman’s Hermits at the CultureSonar store. Tom also took some glorious shots of jazz legends like Louis Armstrong, Dizzie Gillespie and Nina Simone, also available at the store.

0 comments on “The Classic Photos You Haven’t Yet Seen”