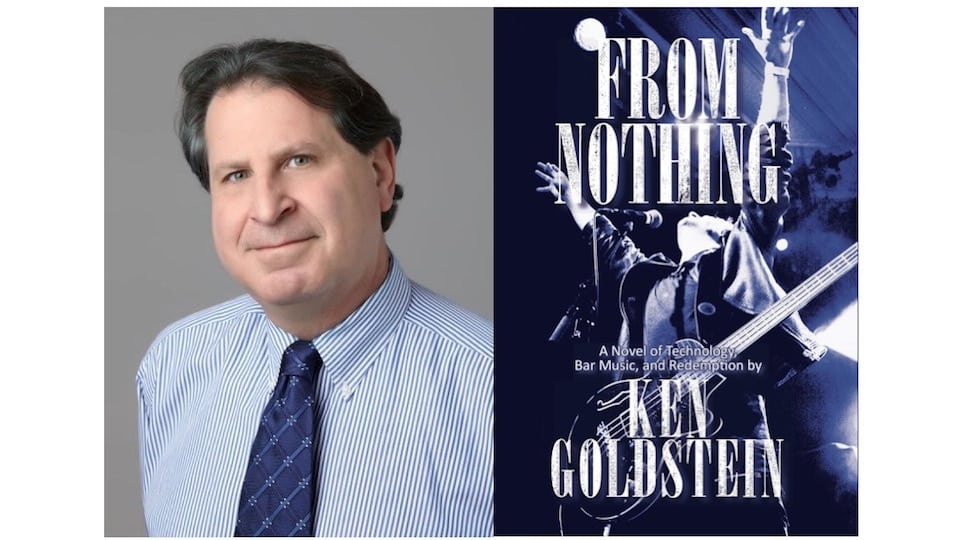 In Ken Goldstein’s new book From Nothing: A Novel of Technology, Bar Music and Redemption,  protagonist Victor Selo has been dealt a decidedly mixed hand. He’s both a brainy tech savant and a guy with an effortless ear for playing music who’s made good coin from the former after giving up on his rock ‘n roll dreams. He’s a decent but damaged soul, a product of foster care who hasn’t shaken his deep sense of abandonment. Still, he patches together a life that utilizes his skills and makes early retirement a likelihood. That is, until the day he goes temporarily berserk at a Silicon Valley board meeting, only to get whisked out of the building, brutally beaten, and hospitalized. But it’s when he’s utterly unemployed that things get interesting… (Spoilers ahead!)

In this delightful thriller, author Ken Goldstein utilizes his real-life expertise as a software designer and rock aficionado. It explores one man’s journey from failed business executive to faceless guitarist in a Vegas cover band. After all, when a stranger appears at your hospital bed offering you an escape via some bizarre musical witness protection program, who’d say no? Not Victor Selo. Having no other prospects and aching to re-immerse himself in music, Selo heads to Vegas to work with some charismatic, talented musicians. The lead singer of the band From Nothing (named after Billy Preston’s classic ‘70s hit) is Torch, a gorgeous crowd-pleaser who specializes in 1970s rock covers along with fellow musicians Synthia (keyboards), Baker Bagley (bass) and Phil-Phil (percussion).

Victor is filling in for a former bandmate and very much on awkward probation. Torch aptly dubs the detached but earnest Victor “Nowhere Man” and demands complete obedience. The other members are slow to warm to him. Still, there’s a tangible joy to the passages about rehearsals and performances. We feel Selo’s stunted soul reignite as he masters guitar solos associated with the classic rock era. Sure, he’s a man without a family, girlfriend, or any grounding. Yet his passion for Elvis, Prince, Steven Tyler, James Brown and Wild Cherry helps him forge a bond with his temperamental partners.

Things heat up for From Nothing when they’re given an opportunity to open for The Eagles at Madison Square Garden. Victor has to keep body and soul together as he dodges people who still wish him harm even as takes on an explosive music career. Throughout the book, he’s at a tipping point of disaster and redemption, hope and dismay and even life and death.

From Nothing is a taut thriller with plenty of soul, action, and percolating dialogue. Each plot twist keeps the reader rooting for the rather dour anti-hero who, like the rest of us, just wants love. And you know they wrote a song or two about that. Along the way, we get tantalizing glimpses of Silicon Valley corruption conducted by management hell-bent on crushing the worker bees. We’re also granted a backstage pass to the lives of talented musicians stuck playing other people’s music for the benefit of tipsy tourists. Ultimately, From Nothing is an engaging read with moments of horror, grace, and a puzzled-but-determined pursuit of God. It also has a fabulous soundtrack sure to reconnect you to the songs that live on in us all.

P.S. Click here to order your copy of Ken Goldstein’s From Nothing: A Novel of Technology, Bar Music and Redemption.

0 comments on “Ken Goldstein’s “From Nothing”: This Summer’s Beach Read for Music Fans”