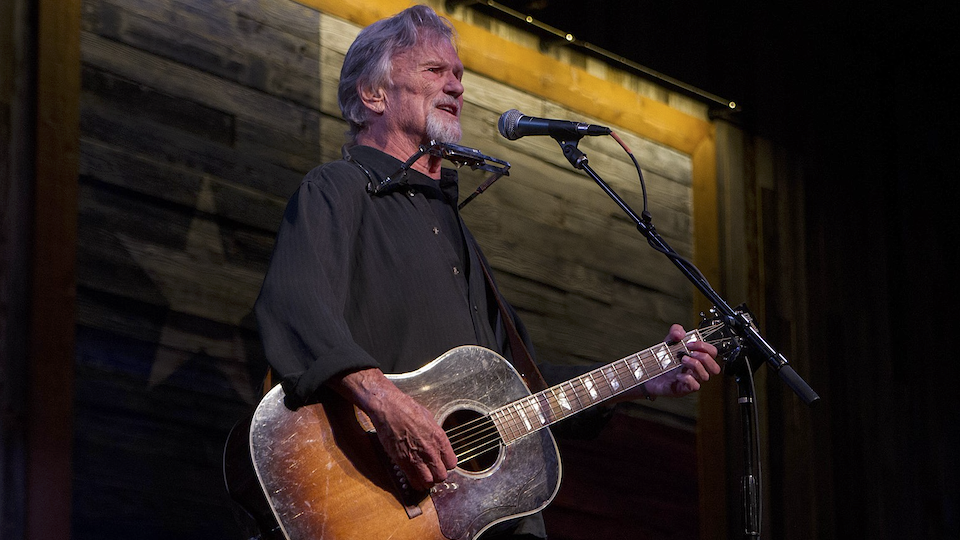 In January 2021, Kris Kristofferson announced his retirement from public performance.  He is 84 years old.  As a 2004 inductee into the Country Music Hall of Fame and long-time legend of music, it seems a good time to reflect on some of Kristofferson’s path-breaking music from the past several decades.

Kristofferson wrote Janis Joplin’s hit song, “Me and Bobby McGee,” but we’re not going to spend much time on just the songwriting.  He was also part of the iconic country music supergroup The Highwaymen, but we’ll leave that focus for another time.  Instead, let’s consider the tracks that Kristofferson wrote and recorded for his solo career.  Covering a range of emotions from heartache, to love, to addiction, and everything in between, Kristofferson’s songwriting brought an intentionality to the way that common people express their thoughts and desires.

The expressive imagery of this song is quintessential Kristofferson.  Lyrics about having “beer for breakfast” and craving fried chicken feels so deeply human, helping the listener connect with this flawed but beautiful man.  The overall lyrical theme about being wasted the night before but embracing his humanity on a Sunday morning is definitely not lost on an artist who eventually had a huge gospel hit with “Why Me.”  The production feels very much true of the 70s, but the poetic lyricism put Kristofferson in a category all his own.

Loving Her Was Easier (Than Anything I’ll Ever Do Again)

This is one of the greatest love songs of all time, regardless of artist or genre.  Kristofferson’s writing is perfectly highlighted by the gentle production around his expressive, poetic lines. The song creates visceral images about being in a present moment, completely and fully.  Kristofferson captures a “feelin’ I have never known before in my time.”  There’s an impossibly dreamy sensibility captured in the song.  Similar to the substances addressed in his other music, Kristofferson describes the love of this woman as intoxicating in a totalizing and powerful way.  It’s romantic and undeniably authentic.

While a lot of Kristofferson fans know him for the snarky lyrics on some of his songs, it’s the earnest gospel tune “Why Me Lord” that achieved his loftiest music industry accolades.  Working alongside the immutable Johnny Cash, Kristofferson apparently came to his own confessional faith expression.  As someone who spent so much time singing about being “wasted” and “broken,” this song showed a brighter version of Kristofferson’s soul.  The “I know what I am” line resonates with the songwriter’s familiarity with feeling worthless and downtrodden.  Even folks who may not be fans of gospel as a genre will find something to appreciate in Kristofferson’s tone and sincerity.

Help Me Make It Through the Night

Young Kristofferson was known for singing lyrics that other artists were afraid to tackle in a more conservative time in American history.  His boldness and willingness to cross lines was all the more appealing to folks who appreciated his “outlaw” image.  So this song is about spending the night with a woman outside of a conventional marriage relationship.  Although it never says so explicitly, the song seems to allude to a one-night stand.  But in terms of lusty acoustic songwriting, this one will garner a smirk from the most stoic of old-school music fans.

To Beat the Devil

Not only is this the best Kris Kristofferson song, it’s one of the best songs of the 20th century. The clever narrative form is endearing, comfortable, and interesting.

Much like “Sunday Mornin’ Coming Down,” Kristofferson’s writing crossed over from just another “country” or folk tune to something more closely resembling literature.  The imagery of common people engaging with baser instincts drips through the composition from start to finish.  The literary turn when encountering the Devil as a character makes the song feel like an encounter with the supernatural itself.  The listener cannot help but relate to the protagonist throughout the song, first with empathy and then with a shared celebratory feeling. It’s a joy; it’s an adventure; it’s an American songwriting classic.

1 comment on “Kris Kristofferson: 5 Top Songs from His Storied Career”