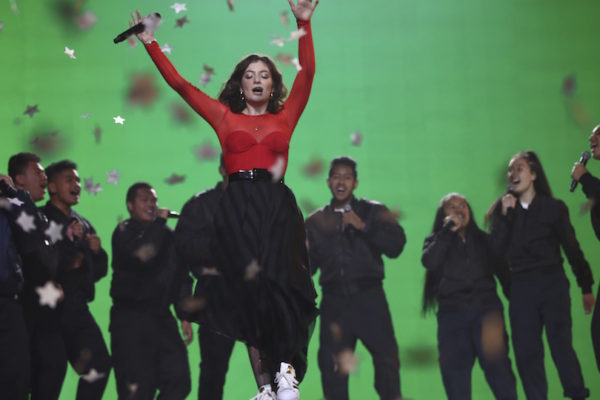 I heard “Royals” for the first time back in 2013. It was one of those pop songs that stood out from the crowd – built around a minimalist beat with its finger snaps and bass, and with  lyrics that made you interested in the performer and her backstory: “And we’ll never be royals / It don’t run in our blood.” Although Lorde was only 16 at the time, this was a pretty assured statement of who she was: a young girl with an artistic vision, setting out to distance herself from the materialism and excesses of the pop world, and to instead sing more about who she really is. Needless to say, the debut album was something to look forward to. Could she sustain her vision and those production values for a whole full-length effort? Maybe even expand upon them? Coming out later that year, Pure Heroine answered those questions with an “eh, kinda.” While the album definitely had some extra gems besides “Royals,” it still felt  inconsistent and undercooked, like the best was yet to come.

Well, after a four-year gap, we’ve finally gotten new material from Lorde. “Green Light” was the lead single that preceded her second album Melodrama, and it showed that progress was indeed made. This is a song where not one second is wasted, with hooks jumping at you from every direction. Never mind that the chorus is insanely catchy, the verses also feature multiple melodies that are just as memorable. This is the first thing you’ll notice about Melodrama: Lorde’s finally learned to write melodies that are gripping and dynamic enough to match her lyrics and personality. “Homemade Dynamite,” for example, compares spontaneously bonding with a stranger to a dynamite explosion, and indeed, by the time the tempo speeds up and the falsetto chorus arrives we believe it to be true.

“The Louvre” features some trademark quirky-yet-relatable Lorde lines such as “I overthink your punctuation use” or “They’ll hang us in the Louvre / Down the back, but who cares – still the Louvre,” but even if you’re not keen on that, the bass-heavy beat still makes it a killer track. Or I could be talking about the blasting horns of “Sober” or the unexpected industrial-influenced break in “Hard Feelings/Loveless.” Equally impressive are the times when the album slows down and goes into ballad mode, as seen on “Liability” and “Writer in the Dark” – the latter in particular being an absolute highlight with Lorde pushing herself vocally more than she’s ever done to a quite powerful effect. The teenage sarcasm of the first record is now replaced by genuine emotion.

Naming the album Melodrama seems to me like her way of staying one step ahead of the critics, who were probably going to characterize the album as such. This is Lorde’s acknowledgement that maybe the music is indeed melodramatic at times, as well as specific to her own personal life and age, but then again, why would she choose to sing about anything else? Jack Antonoff (Bleachers, Fun) is credited with co-writing nearly every song here, yet there’s no doubt that this is Lorde’s show. And if you were a fan of her in the first place, I see no reason that you wouldn’t see Melodrama as an improvement. It’s been quite the long wait, but she eventually came out with one of 2017’s most interesting pop releases.

PS. Some other 2017 albums worth checking out. Plus, show a little love for Mariah Carey.

0 comments on “Lorde’s Even Better the Second Time Around”