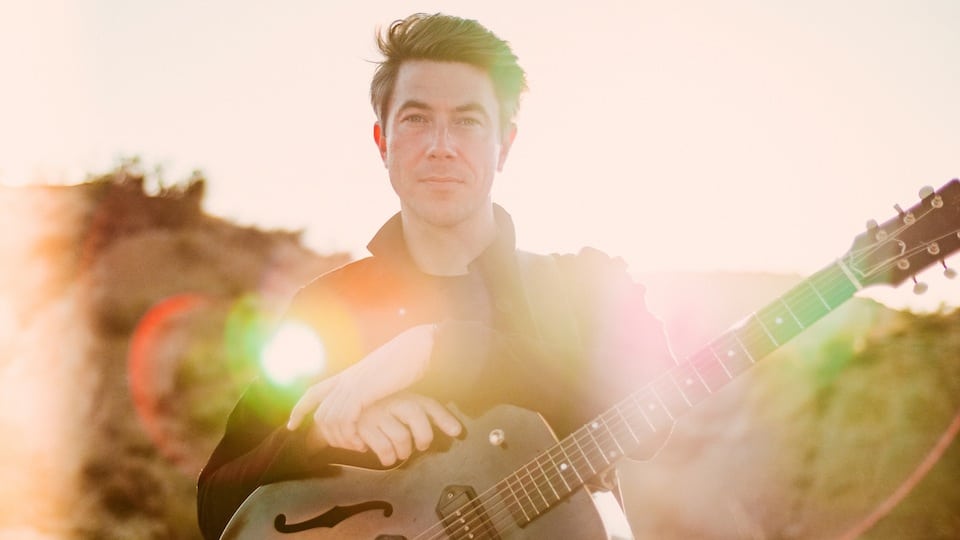 Luke Winslow-King’s new album Blue Mesa defies easy categorization. One song sounds honkytonk (“Leghorn Women”), another roots rock (“Chicken Dinner”), another country gospel (“Break Down the Walls”) yet as the dapper singer-songwriter and master slide guitarist points out, “All of these styles revolve around the same root. They’ve all got a little bit of blues in them.” That perspective may explain Winslow-King’s ability to “move effortlessly across the spectrum of American roots music idioms” as American Songwriter once aptly pointed out. Having a dozen guitars probably doesn’t hurt either. We asked him about that and more in the following interview.

Q: Songs like “You’ve Got Mine” and “Better for Knowing You” feel as though they were inspired by a single person. Care to share who the muse was?

A: “You’ve got Mine” is a song about universal acceptance and friendship. I wrote it with my dear friend Lissa Driscoll before she passed away last Fall. I definitely think of her when I sing that song. “Better for Knowing You” is about being in a love affair that you’re not quite ready for. It’s about experiencing love and having personal growth from a relationship although you’re not able to pursue it any further.

Q: This album definitely has an upbeat feel. Even the songs “Thought I Heard You” and “Farewell Blues,” which have to do with the ends of relationships, are done in a sly way that brings a smile. So, may we ask: What’s the key to happiness?

A: You definitely have to learn how to celebrate heartbreak and hard times. That’s what the blues is all about, I guess. That’s what keeps me going and always reaching artistically. For me, I would say the artistic journey is what keeps me happy and inspired. If I’m not feeling satisfied with my situation I can usually create something out of it that furthers me down the road and offers something to my audience.

Q: How many guitars do you own and do you have a favorite one? If so, what is it about this one that you like so much?

A: I have about a dozen guitars. I have a 1880s American Conservatory parlor guitar that was gifted to me by Brian Galloup. It’s small and manageable and plays like a dream. He filed the braces and tuned the whole instrument so that it sings. Brian saw that I had broken my 1900 parlor guitar in Austria while on tour. It fell off the stand… When I returned back to Michigan. He told me to come into the shop, that he had a surprise for me. He made me promise to travel with it and play it as a regular guitar. Not treat it like a museum piece.

Q: You seem to approach life as an adventure, You’ve worked with the blind in Harlem, studied in the Czech Republic… Do you have a favorite city outside New Orleans in which to perform?

A: I really enjoy playing in Spain. We have a really enthusiastic audience over there. My last couple of shows in Madrid have been a dream; people dancing and singing along to the lyrics, and just being generally ready to have a ball. I remember feeling satisfied with myself in the music the last time I was there. It was like I had a feeling, wrote a song, the audience listened to the music, understood it, and was sharing the moment with me. The full cycle completed…I’m lucky to travel far and wide and have many places that I return to, many places that feel like home.

Q: You’ve been a resident of New Orleans both before and after Hurricane Katrina. How did that tragedy impact the music scene specifically? Did it affect your own music personally?

A: Yes, I was studying classical music at the University of New Orleans before the storm, and had moved to New York City only months before. I moved back to New Orleans the winter after Katrina. It completely devastated the city and the music scene at first, but it also gave the music a purpose. It gave the music a reason to thrive again. I can remember shingling roofs that winter and being impressed by how many concerts were happening in a city that barely had working facilities. Listening to WWOZ announce the concert listings, to see the music growing back in the early stages was so beautiful. The music scene has been branching out ever since. For better and for worse… I feel like I found my musical voice during that decade. I came up in New Orleans during that struggle. It’s definitely part of my story. There were a lot of important lessons learned by many. I think a lot of us learned what music is for. It was a muse, a rallying cry, something for people to band around, something to live for and enjoy when there was little else to celebrate.

Q: If you could collaborate with any musician no longer of this earth, who would it be?

A: That is a tough one. I would really like to have worked with Levon Helm. I love his tone, and style, just the spirit of his music. Even in his later years. I think it would’ve been awesome to write with him as well. I feel like he was really generous with his audience. He never seemed to crave the spotlight, or to be on stage above his audience. He always seemed to be a servant of the music. He probably had a lot of good pointers for young guys making a go at it.

I opened for country legend John Anderson one time at a Ford dealership in Conway, Arkansas. He told me stories of Levon following his tour bus in a Ford truck in the ‘80s; driving himself and having fun on tour in his wilder days. I always loved that story.

Q: As someone with roots in both jazz and classical music, how would you explain the crossover appeal of Bela Bartok?

A: Bartok’s music is unique because he takes folk music and puts it on the classical stage by weaving it in with different influences. He takes the sound of his people and translates it into a language the world can understand. Even though my music has nothing to do with Hungarian folk music or classical music. I’m inspired by this approach. By taking your personal roots and making them into something relatable. His music can be obscure and harsh at times, but he always leaves a relatable thread. He always makes you search for something more by giving you a piece of something you already know.