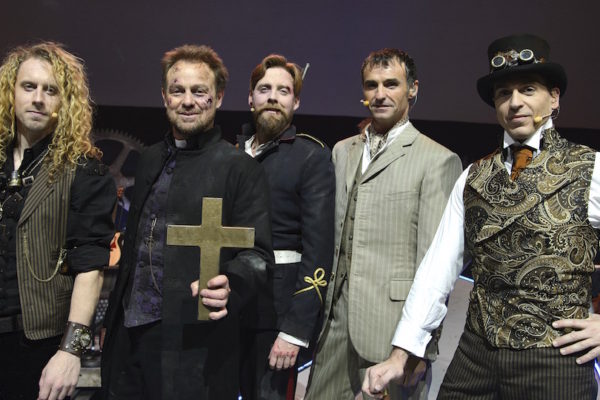 There have been many adaptations of H.G. Wells’ novel War of the Worlds, including the infamous 1938 radio broadcast by Orson Welles, and the memorable movies from Byron Haskin (1953) and Steven Spielberg (2005). But here’s one version you may not know: A concept album entitled Jeff Wayne’s Musical Version of The War of the Worlds first released in 1978. I can still remember coming across the disc in my local music store, and being knocked out by the cover artwork, depicting a Martian war machine in full attack mode. Opening up the record, and discovering a booklet, complete with the text and lyrics for the story, as well as more cool artwork and illustrations, made the whole thing irresistible to my younger self by literally combining two of my passions — rock music, and science fiction.

[amazon template=right aligned image&asin=B00C97AXXQ]The double album recounts Wells’ story in two parts: “The Coming of the Martians” and “The Earth Under the Martians” much like the two-part structure of the book. The project was the brainchild of producer Jeff Wayne, an American based in England, whose work spans from advertising jingles (Gordon’s Gin) to TV theme songs (World of Sport) to film scores (McVicar) as well as producing/arranging for rocker David Essex. For his rock and roll sci-fi epic, he assembled a top-notch cast, including Essex, Justin Hayward of The Moody Blues, Phil Lynott of Thin Lizzy, and Julie Covington of Godspell and The Rocky Horror Show. For the role of the narrator, Wayne secured bona fide movie star Richard Burton, who was very enthusiastic about the project.

Wayne reworked Wells’ novel into a full-blown rock opera, featuring a full orchestra and a rocking band filled with top session players. Since this was the 1970s, there’s also a heavy dose of synthesizers even though the story’s 19th-century setting was retained. Combining progressive rock, orchestral flourishes, Burton’s foreboding delivery, and eerie sound effects, the album is firmly etched into its time period, right down to the additional songs from Gary Osborne (who worked with Elton John during the late 70s and early 80s). And the record wasn’t just a blip on the cultural map when it was released. The ballad “Forever Autumn” (sung by Hayward’s character of The Journalist) became a sizable hit in the UK and is still performed live by Hayward to this day.

While Jeff Wayne’s Musical Version of The War of the Worlds was a major success in England, it remains more of a cult item here in the United States. But it’s always also on the verge of a comeback, too. The album has inspired a pair of video games, a stage show which toured Great Britain, Australia, and New Zealand, and several “remixes” over the years. A newly recorded version of the story, Jeff Wayne’s Musical Version of The War of the Worlds – The New Generation, featuring Liam Neeson and Joss Stone, came out in 2012. The legacy of Jeff Wayne’s original concept of a hybrid of science fiction and rock and roll continues into its 40th anniversary year. There’s a reason this album has sold 14 million worldwide. Now watch out for that Martian heat-ray!

PS. When we talk “sci-fi,” we can’t ignore the epic music of Star Trek.  And speaking of Justin Hayward, take an in-depth look at the Moody Blues’ epic “Days of Future Passed.”

0 comments on “A Chorus Line of Martians? Not Quite, But Close”