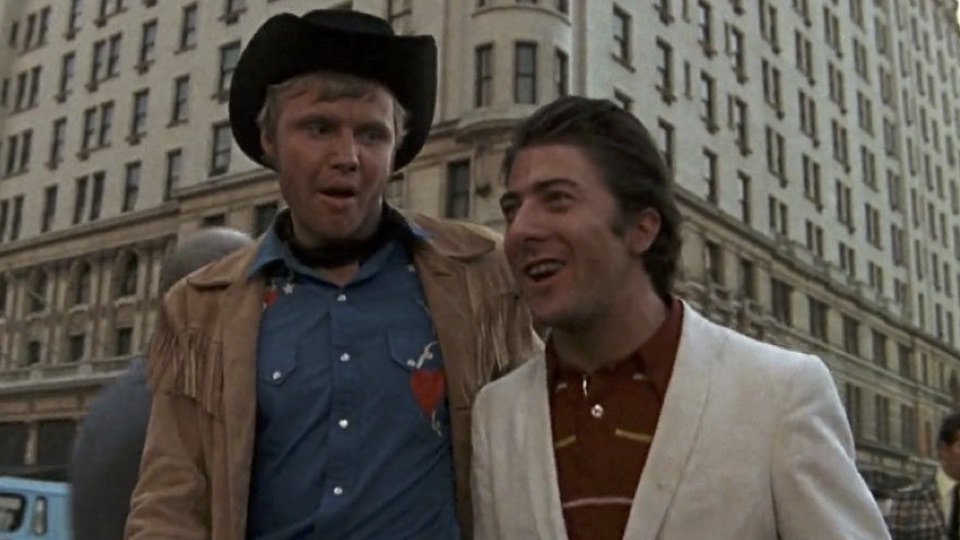 Midnight Cowboy is undoubtedly one of the most important Hollywood pictures of all time. A pivotal moment in the careers of Dustin Hoffman, Jon Voight, and director John Schlesinger, it’s a story which didn’t take long to leap from book to film. James Leo Herlihy’s novel, too, was a meander through what it means to make a living – to hustle – at the lowest ebb. In 1969, Schlesinger and screenplay maestro Waldo Salt’s adaptation laid bare the struggles of lost souls all too well, and it was rightfully rewarded with three Academy Awards. Even today, seeing Joe Buck and Ratso Rizzo stumble through penny-scraping in New York City hits hard.

At the time of its release, Midnight Cowboy was seen as a bold, brave piece of film-making. While its content in today’s climate may not make quite as many heads spin, it had earned itself an ‘X’ rating on initial release, thanks to its themes of homosexuality and prostitution. After its wins at the Oscars in 1970, Hollywood downgraded it to ‘R’ – which may well have persuaded more people of the time to go see it.

That being said, it’s still famously uncomfortable to watch, in many different places. It’s a buddy film with a difference. Joe (Voight) is thirsting for something bigger in life and strives to make his fortune by tempting bored housewives into spending a twenty or two on his sexual services. He’s a natural match for the rat-like and aptly nicknamed “Ratso,” who has spent much of his life hustling for a living. Whether or not he was ever going to be destined to be more than just a con artist or a shoeshine merchant, he still dreams of Florida. This strand makes the ending all the more devastating.

Let’s get back to thinking about why Midnight Cowboy is considered difficult to watch – still – in 2019. It’s not about the ‘censored’ content – leaving the ‘X’ rating behind, Cowboy is poignant as a case study, albeit a fictional one, of what people will be willing to go through to make their dreams happen.

Joe’s life has hardly been a happy one. We’re given snippets of his unhappy childhood. We’re shown how poorly he’s treated by the people he assumes are going to be worthy clients. Joe’s inner struggles are laid bare for everyone to witness. Cowboy is difficult at parts to watch simply because he continues to relentlessly pursue his dreams down such desperate channels.

You could argue that Ratso is equally downtrodden. However, he’s in a far worse way. He’s been in the game so long his body is starting to fail him. This is not a character study Hollywood would normally have swung so easy for, especially not at the time.

Cowboy earned plaudits thanks to its no-holds-barred depictions of loneliness and desperation. It still hits hard, even to this day. The marks that earned the movie its initial ‘X’ rating are actually pretty tame by some of the standards we’ve seen since. However, it’s still known as the first movie of that rating to both be nominated for and to pick up an Oscar, a worthy accolade.

Midnight Cowboy hits home in 2019 as it’s clear that, while the world has moved on in many ways, big cities are still full of people hustling and grifting to get by. Thousands of people continue to die in poverty, their dreams unrealized. This is a movie which gave us a bit of a window on a world many of us weren’t aware of. Instead of glorifying the ‘American Dream’, it brought us the less-talked-about ‘American Struggle’. And it had an incredible cast to help it along the way.

It’s also a good time to reflect on the production of the movie, too. Neither Hoffman nor Voight were originally intended for their roles. Voight had been drafted in after the original “Joe Buck,” Michael Sarazin, was dropped over financial demands. Voight, however, famously did the job for next to nothing, taking bare minimum. The actor not only requested that he play the role for free, he was certain that Cowboy would go on to be an enduring classic.

Hoffman was less sure and was at one point concerned how his career may be affected by such a controversial piece. Certainly, at the time, not many people were sure quite how Cowboy would go down in mainstream Hollywood. The answer is, of course, that it earned its ‘X’. Thankfully, the Academy helped to bring the tale to a wider audience. It picked up Best Picture, Salt won Best Adapted Screenplay, and Schlesinger took home Best Director. It was nominated for seven different awards in 1970, with stars Hoffman, Voight and Sylvia Miles all put forward for awards.

Related: “Let’s Shine A Light On the ‘Midnight Special'”

But how would Hollywood rate Midnight Cowboy in 2019? Times have changed. Depictions of prostitution, nudity, and allusions to homosexuality are no longer taboo enough to warrant an ‘X’ rating. In some contexts, they may not even earn an ‘R’.

However, Schlesinger’s depiction of hustler desperation will still likely hit home as a harrowing, mystifying piece of cinema for many people. This is not a happy story – and while Joe and Ratso’s relationship is one you warm to very quickly, it’s a tale which cycles round, with its characters destined to wander as lost souls for as long as their dreams lay in reach.

While things may now be different in some ways, other challenges never quite change. Now is a great time to revisit Midnight Cowboy. There may never have been another movie quite like it. It is still one of the most important movies to have claimed a Best Picture Oscar, and certainly one of the most impactful.

Photo: Jon Voight and Dustin Hoffman in a scene from Midnight Cowboy

0 comments on “Midnight Cowboy at 50: How Would Modern Hollywood Rate It?”