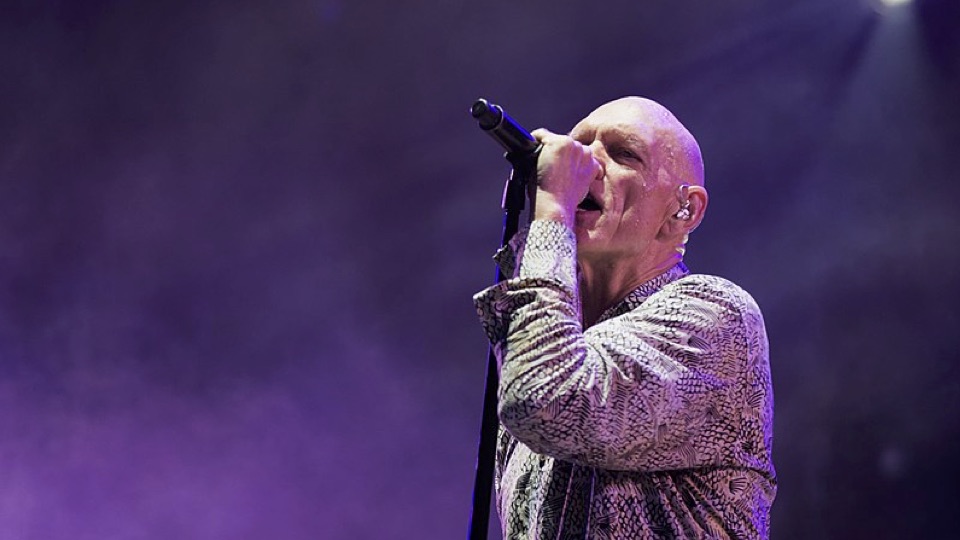 Across ten million album sales, eleven acclaimed studio albums and a myriad of anthems, Australian rockers Midnight Oil have maintained a trajectory both political in content and fiery in music. Anthems “Beds Are Burning”, “Blue Sky Mine” and “Put Down That Weapon” proved popular in the Eighties in Europe, a continent Midnight Oil are revisiting on their latest tour, which includes a stop in Brixton (June 13). Support acts include Wolf Maahn (Hamburg, June 17th ), Bad//Dreems (Manchester, June 9th ) and Declan O’Rourke (Dublin, June 11th ). Midnight Oil reunited after a fifteen-year hiatus, during which time vocalist Peter Garrett focused himself on Australian politics, for a 2017 tour and have suggested new material may materialize in the near future. We caught up with guitarist/songwriter Jim Moginie ahead of the tour.

What can European fans expect of this tour?

That’s a good question. We’ve had a really different kind of experience to bands of the Northern sphere. We started in the seventies, very different culture, a lot of pubs, singing about the aboriginal culture, growing up in Australia. Quite a brutal environment at times. We just play the stuff that gets us going, we play without computers, I guess that’s what they can expect when they come see us.

I can’t pass the opportunity to ask about Declan O’ Rourke. How did you encounter him?

Man, I love Declan. Incredible voice, incredible songwriter. I travel to Ireland quite a bit, I’m a tragic trad fan [laughs]. My roots are Irish. I met him in Australia first when he was playing Kyabram. I love his stuff and it’s an honour that he will be playing with us in Dublin at the Olympia Theatre.

Red Sails In The Sunset is considered a band watershed. Why has it maintained such a long-lasting impression?

Interesting one. There’s a lot of good songs on that album. It was a time of Reagan and people pushing buttons. We were doing it in Japan and were learning Japanese; badly. There’s some political stuff in there and the cover is Sydney harbor as drawn in a nuclear holocaust. It was done by a Japanese artist and, as you say, has become a seminal Australian album.

Diesel and Dust details the struggles of the indigenous Australian communities. How strongly did the band feel about that as a cause?

Completely, and it’s one we still do! We went to the desert, it must have been 1986, it was a great education for us. I was a white kid growing up in Sydney, I didn’t meet many Aboriginal people. We don’t like to think of the White Man taking everything away in Australia! We tend to bury the fact. There were many communities’ years before we came. I had no idea of their culture, the languages, the art, the sense of family, all going back years and years. I was young, sure, but this gave me a sense of reality and an educational one. We brought that into some of our songs.

As a musician, you transition from guitar to keyboard. How is that transition?

When we started the band, it was a rock band, so guitars, bass, and drums. Over time, we started bringing in other instruments, we started playing acoustic stuff, then piano and synthesizer. We have an acoustic set during the show, the drums are brought to a minimum, then expanded for other stuff. We call it the “Cocktail Set”. We use a very small kit for that, almost a smaller section. When we brought other instruments in, it often falls on me to play those instruments and bring those sounds to life. I don’t mind that role. Generally, what best fits the song, so big ideas often get big sounds. Some of our songs, “Beds Are Burning” and “Power and the Passion”, they have a lot of horns going on. So, I have to change from guitar to keyboards, but if you come to our shows, you’ll get to see me do my dance!

Midnight Oil have been championing Climate Change recently. What is the band’s position?

Right now in Australia, we have what we call the “Climate Change Election”. Everyone’s worried about it because governments seem to be sitting on their hands. Scientists have been talking about this for years. You might say in Ireland, we’re a small country, there’s only four million of us, what can we do? Everyone has to play their part. I’m in my sixties, I’ve seen some changes in my life. The rainfall here in Australia! We’ve changed nature because of our lifestyles. We can’t be the generation that didn’t do anything about it!

Midnight Oil have hinted at a 2020 album. What can you tell us?

I’m not sure what I can reveal. The band broke up in 2002 and we only got back in 2017. We weren’t playing new songs then because we were too busy trying to remember the old ones [laughs]. Peter got into politics for a while, very different to music, but now finds himself in a creative spirit again. He’d released his solo album just before the tour. So, we’re all getting on and finding things to write about. While we still have things to say, we’ll keep doing this.

Anything else you’d like to tell Culture Sonar about the shows?

Anyone who buys a ticket, they’re going to see music with a lot of blood. Some of it is anthemic, some of it is old school, songs designed to connect with people. We’re going to rotate the setlist, now with the internet, people will know what we’re playing. We don’t want that, so we’ll be rotating every night. People can have a bit of a bop, bit of a dance. We’re playing stuff and talking to audiences, getting people to think about what’s going on and how that connects with their life. “Beds Are Burning” was a song we wrote about the Aboriginal people that connected with people all around. Who would have predicted that?

0 comments on “Midnight Oil: Back and Still “Burning””