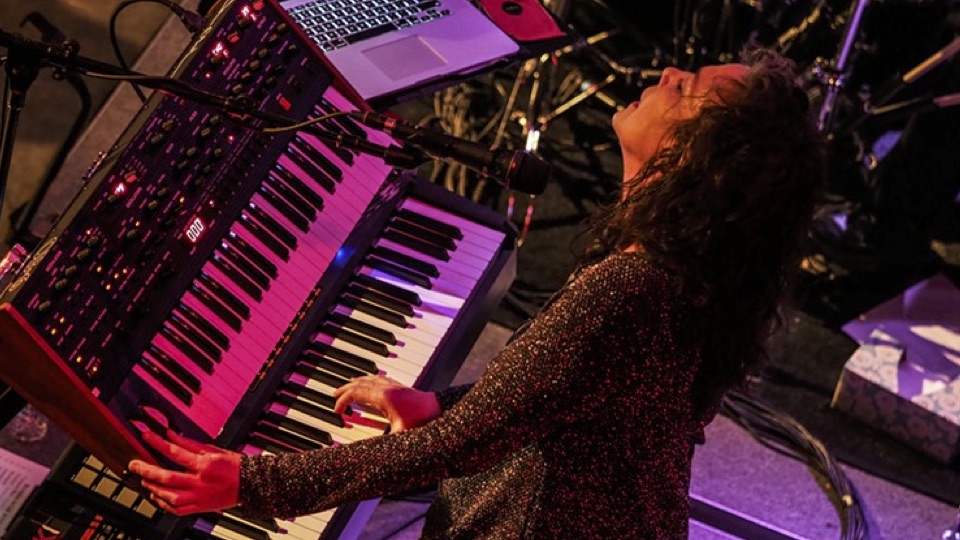 In the video for Wendy and Lisa’s 1987 single “Waterfall,” Lisa Coleman sits at a psychedelically-painted baby grand piano full of water. As Wendy Melvoin sings her heart out and attacks her all-white guitar with funky finesse, Coleman maintains a stoic, steady and supportive presence behind her, serenely smiling at her partner’s performance. It’s a striking visual representation of their decades-long musical alliance, beginning with Prince and The Revolution and continuing through their own stellar “Wendy and Lisa” discography and their more recent TV scoring work: while Melvoin brings the syncopation and fiery funk, Coleman’s role is more textural, creating rich sonic and harmonic soundscapes. Those soundscapes are on full display on Coleman’s stunning new solo album, Collage. Available on her Bandcamp page (more on this in a minute) and clocking in at 33 moody minutes, Coleman’s self-described “album of piano improvisations” is actually a spellbinding work of profound emotional resonance.

The liner notes for Collage come in an attached pdf document in which Coleman cites the medium of collage as a metaphor for her musical process, sharing with us how she glues together seemingly random bits and pieces of her varied influences to create a new sound of her own. (She depicts this in a whimsical drawing in the digital booklet, illustrating likes of Chopin, Bill Evans and Joni Mitchell along with “Mom and Dad” and “cereal.”) Collage is also the perfect name for an album that gathers 11 tracks from multiple sessions and locations spanning several years but somehow feels and sounds wholly unified.

The consistent thread is Lisa Coleman’s powerful muse. “I hear the music as it happens,” she writes, and a deep listen to Collage bears this out. (Collage is best experienced from start to finish, and at 33 minutes there’s no excuse not to!) Improvised works like “Piano Improv 77” and “Prophet 3” take the listener along for a gentle ride as Coleman sails on a tranquil musical sea. Even the more developed, constructed pieces like “Piano Bytes” and “There’s A Song In There” (both featuring Melvoin) seem to unfold organically and unpredictably, like rain against a car window or an early morning walk through a forest. It’s easy to see how Wendy and Lisa have succeeded so mightily in the film and television composing world; the music on Collage is so deeply evocative of a multitude of emotions and sensations, but no pictures or stories are needed here. Coleman also contributes her own detailed notes about each track, augmenting the experience of peering through a window into her musical soul.

Downloading Collage from Coleman’s own Bandcamp page makes it feel even more intimate, like a precious gift directly from Lisa to diehard W&L devotees like myself! It is also a victory for artists and musicians everywhere that she could release such a deeply personal, experimental album without input or approval from any industry “gatekeepers,” and I happily purchased Collage knowing that every one of my dollars would be going directly to Lisa Coleman. Surrender to Collage and experience the singular musical genius of a true American master.