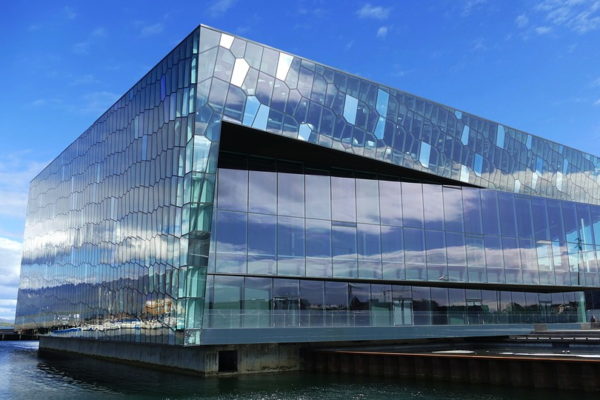 Two-thirds of Iceland’s 350,000-person population reside in Reykjavík — a city hard not to fall in love with. And while it’s not often mentioned in the same breath as cultural capitals like Tokyo, Paris, and New York, this small nation’s largest city is a hidden treasure overflowing with artistic excellence. Indeed, its size no doubt feeds its drive for independent expression and nowhere more so than in music.  It’s furthered the “black metal” genre via Solstafir and Svartidaudi and gave the world such incomparable artists as Björk, Of Monsters and Men, and Sigur Rós. In short, this tight-knit community has one of the most unique music scenes out there. So where should you go when you’re in town? Here are six places in Reykjavik for the music lover to check out.

Harpa
This state-of-the-art building, serving as both a music hall and conference center, is considered one of the gems in Iceland’s Cultural Crown, with its unique glass facade complemented by an impressively contemporary interior. Officially open since 2011, Harpa has quickly established itself as the premiere concert hall in the country and currently programs an eclectic lineup ranging from the Gothenberg Symphony Orchestra to standup comic Russell Peters to ABBA. If you experience déjà vu on your first encounter, it may be because the center was featured in episodes of Netflix’s Black Mirror and Sense8.

Húrra
Not to be confused with the clothing store of the same name, this intimate club delivers one of the most authentic music experiences in Reykjavik. As one friendly employee put it, “You don’t really live in Reykjavik until you play in a band.” Once you’ve got the band assembled (whatever your genre), this is probably where you want to jam as Húrra features an impressive variety of music on any given night, from rock to punk to rap to metal to even karaoke. There is a reason that Húrra was voted best bar for live music for three years running by popular Icelandic beat magazine The Reykjavík Grapevine. Playing here is a badge of honor.

Iceland Airwaves Music Festival
Undeniably Iceland’s largest musical celebration, the Airwaves Music Festival brings together international and local artists such as Fleet Foxes and Mammút. Dubbed by Rolling Stone‘s David Fricke as “The hippest long weekend on the annual music-festival calendar,” Airwaves has quickly become Iceland’s’ largest music experience since it launched in an airplane hangar in 1999. Since then, the festival has only become more popular thanks in part to headlining international acts such as Florence + The Machine, Mumford & Sons, and Fleet Foxes as well as homegrown talent like Asgeir.

Kaffibarinn
Offering one of the coziest experiences on the island nation, Kaffibarin is dimly lit by candlelight and hosts one of the best happy hours in town. With Blur’s Damon Albarn as part-owner, it is no coincidence their logo is in the style of the London Tube. At night when the nightlife and music turn up, Kaffibarin proves to be a very popular spot, with long lines of fans willing to cram into the small venue for live music. Kaffibarin is a hot spot for DJs, but also welcomes a variety of musicians on a nightly basis.

See Related Article: “Classical Music Gets the Gypsy Spirit in a NYC Crypt”

Kex Hostel
Hostels are likely not the place you’d generally associate with hearing live music yet Iceland actually has a tradition of pairing the two. (There’s also the Loft Hostel in downtown Reykjavik and the Freezer Hostel in West Iceland.) Perhaps one of the reasons that this particular place has emerged as a noteworthy music venue — albeit for smaller, intimate acts — is that the larger building also houses artists’ studios. It’s worth checking out if you’re feeling especially adventurous.

Mengi
Mengi isn’t just a locale. It’s an experience. Akin to an indoor amphitheater, the artist-run venue hosts the more progressive and experimental artists in the region. (Think instrument inventor Yuri Landman and contemporary classical composer Bara Gisladottir.) But Mengi’s raison d’etre extends well beyond concerts. There’s also a podcast and a record label which issues releases in vinyl and CD formats. The venue even offers memberships to those who wish to have special access to each aspect of the Mengi experience.

0 comments on “A Music Lover’s Guide to Reykjavik”