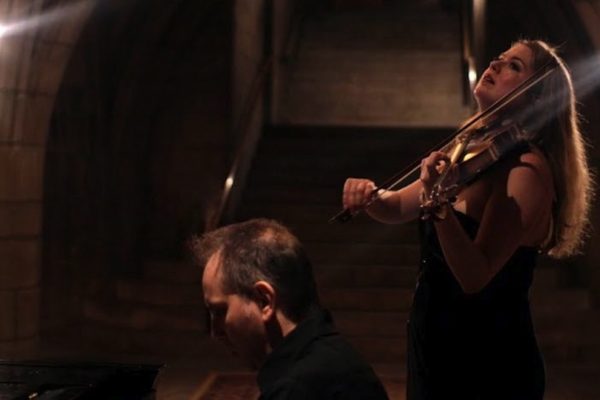 Is there anything more haunting than sitting in a Washington Heights crypt (built back when ladies wore hoop skirts) and listening to some out-of-this-world gypsy folk music? No, there is not. My fiancé and I arrived early to hear the extraordinary violinist Lara St. John and pianist Matt Herskowitz.  The performance was held at NYC’s Church of the Intercession, a treasured stone-and-cement relic dating back to 1846, a time when buggies rolled down Broadway and horse manure messed up your boots. The church’s interior is no less antithetical to our modern advancements (I could hardly find an outlet to recharge my smartphone).  But any inconveniences were quickly forgotten upon meeting Andrew Ousley, the charming curator for “Crypt Sessions,” an enormously popular classical music series that donates its proceeds entirely to the church.

Before the performance, searching for the tombstone of the esteemed late mayor Ed “How’m I doing?” Koch in the nearby Trinity Church Cemetery graveyard was a great way to start the evening. Then, after a cup of wine and some spinach pie in the church rec room, we waited for the evening’s entertainment to begin. Amidst friendly chatter, a voice called us forth, drawing us to the crypt, and we were eventually at the top of a steep staircase leading down to a grotto where a beautiful black Yamaha baby grand piano awaited with candles all around creating a soft golden light.

In his opening remarks, Ousley introduced St John as “a force of nature” and a “rare combination of otherworldliness and acute skill.” She herself told the audience of her love of Romani, Klezmer, and Middle Eastern tunes, a devotion that had led her to gather thousands of musical pieces during her international travels. Her composer friends then tailored this music to her formidable talents, which resulted in an Eastern European classical concert unlike any I’ve heard before.

Although Canadian, St. John explained that her obsession with gypsy music began when she was only 11 years old. And when she plays, you can hear that longstanding passion. I tell you without exaggeration that she is entirely in the zone of her ecstasy as she plucks and manipulates her bow against each string. Herskowitz, for his part, is a nimble and intense accompanist. It’s as though the piano keys tell him how they should be played and he obeys. I relished every piece from composer Milica Paranosic’s “Cocek” to Martin Kennedy’s “Czardashian Rhapsody” to Russian-born Gene Pritsker’s “Moscow” as well as some Lebanese lullabies and an innovative variation of “Hava Nagila” which Hershkowitz had created for this very performance.

Because of the Crypt Sessions’ ongoing popularity, Ousley is now expanding the series to Brooklyn where he’s found an even bigger space at Green-Wood Cemetery. Should you get there early, be sure to track down the graves of Leonard Bernstein or Jean-Michel Basquiat. It may sound creepy, but it’s appropriate.