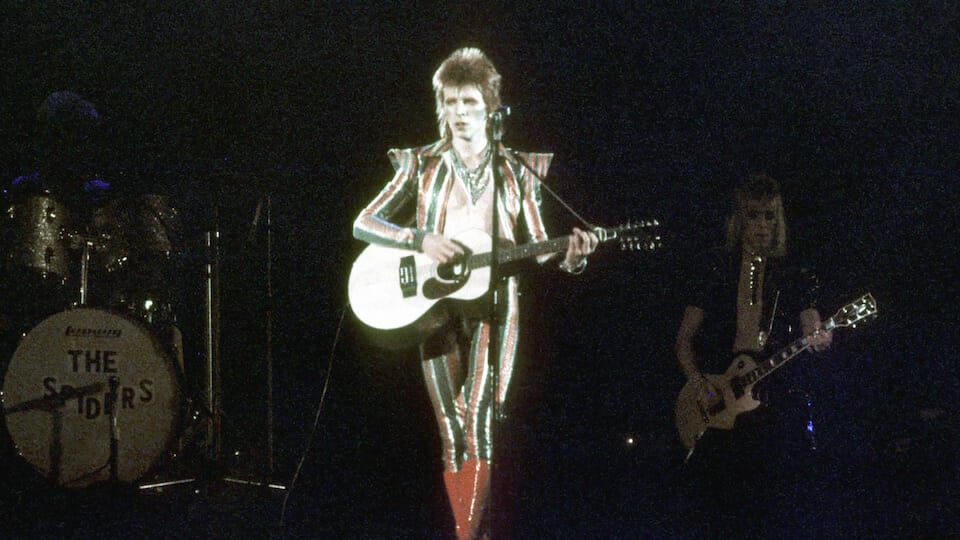 In space, no one can hear you scream. At least that’s what the Alien movie franchise wants us to believe. But do you know what you can hear in space? Rock music. NASA has a long and storied history of playing rock for astronauts working in the heavens above Earth. What started out as fun way for mission control to wake-up sleeping astronauts has become one of NASA’s longest-running traditions. Just about every NASA wake-up song containing the words “fly,” “free,” or “ride” in the title has been played many times over. U2’s Beautiful Day is a frequent choice. Makes sense.

After realizing that there was no official record of the space agency’s musical playlist, NASA historian Colin Fries compiled a chronological list of every song played during every space mission dating back to Project Gemini. The first song played in space? That would be ”Hello, Dolly!” for Gemini VI. One of the most frequent? Louis Armstrong’s “It’s a Wonderful World.” Fries’ research shows that the celestial song choice is quite varied, but the DJs on the ground stick to one cardinal rule: Don’t freak out the astronauts. So, while capsule communicators a.k.a. CAPCOM might not be waking astronauts to the roaring guitar of Megadeth, there is plenty of great rock n’ roll that has had astronauts tapping their space boots. Such as…

The last manned trip to the moon had a couple key rock moments that fit in nicely with the mission. John Denver’s “The City of New Orleans” was played specifically for the line, “Good morning America, how are you?” You see, America was the name of Apollo 17’s command module. But CAPCOM piped in The Doors’ “Light My Fire,” prior to the ship firing its rockets to take it out of lunar orbit and back to Earth.

After ten days and 172 orbits, this shuttle crew was more than ready to come home. CAPCOM’s choice to wake the Columbia astronauts to this Steppenwolf classic prompted pilot James Wetherbee to remark, “We’re ready to rock and roll,” making the phrase an official part of the
NASA record.

What song goes with a spacewalk better than this Dire Straits tune? During STS-57, Endeavour astronauts performed a nearly six-hour EVA (extravehicular activity) to retrieve the EURECA science satellite. At the time, it was one of NASA’s longest spacewalks.

See Related: “The End of Your Favorite Movie Just Got A Nutso Makeover”

No list of space music would be complete without a song from Pink Floyd’s Dark Side of the Moon. The opening sequence of this song woke the astronauts on day five of the mission, which became the first to rendezvous with Russia’s Mir space station. Incidentally, on this flight Discovery became the first shuttle to carry a Coke dispenser.

See Related: “The 10 Best Pink Floyd Songs You May Have Never Heard”

How can this tune not be on NASA’s mixtape? In this shuttle mission, “Major Tom” refers to Commander Tom Henricks. From 173 miles up, not “a hundred thousand,” the view would have still been spectacular.

Rock stars and astronauts are, most certainly, the coolest people on and off the planet. So when McCartney performed two songs for the International Space Station crew live in November of 2005, it made international news. His performance marked NASA’s first-ever live concert link-up to the ISS. McCartney sang the Beatles classic “Good Day Sunshine” and “English Tea,” while noting, “I can’t believe that we’re actually transmitting to space…This is sensational. I love it.”

This track was inspired by the space shuttle itself. Band members watched the launch of Columbia’s maiden voyage live and in person on Apr. 12, 1981. The song was included in Rush’s 1982 album Signals and actually samples radio communications between ground control and crew members John Young and Robert Crippen.

Sonny and Cher’s “I Got You Babe” (multiple extended missions)

Apparently, the guys at mission control have a sense of humor. Over the years, several space shuttle missions have started re-entry procedures, only to have bad weather push their return to the next day. On such occasions, CAPCOM would borrow a play from the movie Groundhog Day. Since the previous day’s procedure would have to be reset and repeated, “I Got You Babe” made for the perfect wake-up song. Too bad NASA never hired Bill Murray to talk to the astronauts on those occasions.

The quintessential astronaut song has a long history at NASA as it recounts the story of an astronaut leaving his family to do his celestial job. For astronauts, it’s personal. When the shuttle program ended in 2011, the song was played one last time for the crew of Atlantis and was accompanied by a personal message from none other than Sir Elton himself. How cool is that?

2 comments on “The NASA Playlist: A Different Kind of Moon Rock”