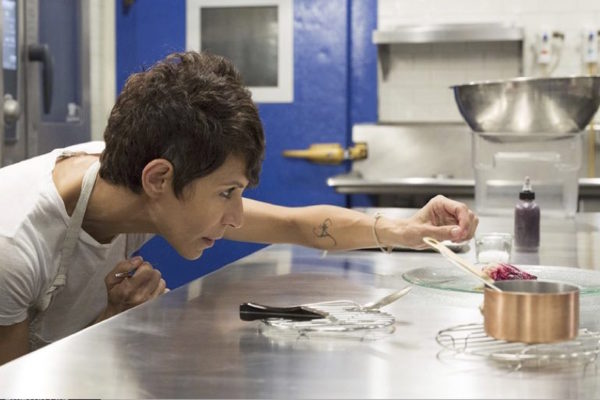 What with Top Chef, Iron Chef, MasterChef, and Chopped, not to mention all their many spin-offs, variations, and imitators, you’d think the TV landscape was too glutted to sustain yet another chef-centric program. Enter Netflix to prove you oh-so-wrong. Their documentary anthology Chef’s Table has, in a way, reverse-engineered the “celebrity chef model” of shows that make stars by focusing on industry stars (some familiar, some not) for whom you probably don’t know the back story. Instead of witnessing someone emerge, you get to see where someone, who has already emerged, came from.

The biopic treatment recognizes the power that comes with personality-based programs such as Julia Child’s The French Chef, Yan Can Cook, and Rachael Ray but in truth Chef’s Table has most to do with Jiro Dreams of Sushi, the critically acclaimed film about Michelin three-star restaurant owner Jiro Ono by director David Gelb (not coincidentally, the producer for this Netflix series). In short, the episodes in Chef’s Table aren’t chatty instructional videos or plugs for a recipe book. They’re 50-minute homages that mix origin story with culinary criticism as a way to celebrate their subjects as the truly individual artists that they are. Watching Chef’s Table, you’re made keenly aware of how much those competitive cooking shows present their contestants as athletes performing sometimes under ridiculous constraints, a format that may show flexibility and inventiveness but does little to reveal the evolution of a philosophy that isn’t rooted in the improvisational.

Clearly, Gelb’s somewhat hagiographic approach is working. Chef’s Table is now gearing up for its third season in 2017 and has already had its own spin-off, Chef’s Table: France (launched with four episodes in September 2016). And if you worry that the formula might lose potency after repeated executions, take note: Chef’s Table Season 2 earned four Emmy nominations compared to a single nomination for Season 1 — and that for original dramatic score! You can credit the story lines which generally are not the conventional ones of cooking school, apprenticeship, small restaurant, big restaurant, major award. Indeed amazingly, some of these creative individuals fell into the profession.

Take Ana Ros, the one-time competitive skier who ended up in the kitchen at Hisa Franko after she fell in love with the son of the owner and then put Slovenia on Europe’s culinary map. Or Alex Atala, the owner of D.O.M. in Brazil, who only got into cooking because he needed to get a visa while living in Europe so he enrolled in culinary school. Even the story of Enrique Olvera of Mexico City’s Pujol is rooted in a courtship that entailed cooking as a way to win the heart of his now wife. Which is not to say that there are no lifelong foodies here. In fact, the most fascinating episode concerns Grant Achatz, whose family owned a diner; a chef who trained with the late Charlie Trotter, The French Laundry’s William Keller, and molecular gastronomy mastermind Ferran Adria. But Achatz is unconventional too, a thinker all his own, a conceptualist who sees the dining experience as one akin to performance art. The questions he asks — What if a strawberry looked like a tomato and vice versa? How do you make food float? Why a plate? — fall well outside the norm. As he succinctly states at one point, “At Alinea, we’re actually trying to curate an experience.” That’s something you sense Gelb might say of his series Chef’s Table as well.