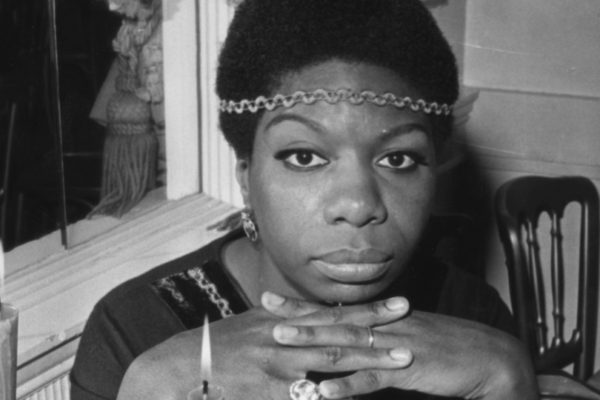 Nina Simone’s inclusion in the 2018 Rock & Roll Hall of Fame class may seem like a head-scratcher given her “classmates” include Bon Jovi, the Moody Blues, Dire Straits, the Cars, and rock pioneer Sister Rosetta Tharpe. Simone herself would likely scoff at any attempt to categorize her work since her music fused so many styles and genres together. In many ways, Nina has always been in a class by herself; her music both of the time and yet somehow also timeless. While it would be wrong to call her anything close to a “rock artist,” she embodied a certain rebellious spirit, both onstage and off, that certainly fits the label: bucking cultural norms, being unapologetically outspoken, and using her music to push for social change. If rock n’ roll is, as famed rock critic Lester Bangs once said, “an attitude…a way of living your life,” then Nina Simone is very rock n’ roll indeed.

Simone’s first rebellion came after she was rejected from the prestigious Curtis Institute in Philadelphia, which she felt was due to racism. Her dreams of being the first black classical concert pianist dashed, the Juilliard-educated Eunice Waymon found work singing and playing jazz in nightclubs around Atlantic City. She changed her name to “Nina Simone” so that her religious parents wouldn’t find out she was “working in the fires of hell.” Though Simone was, by all accounts, a classical piano prodigy, she put her own unique spin on the popular music of the day, combining the likes of Gershwin and Cole Porter with Bach, Brahms, Chopin, and other classical composers. Simone had never sung before she started playing jazz clubs, but soon her androgynous, sultry voice became the defining feature of her long musical career.

Though she spent the next several years steadily recording and performing jazz around the country, Nina didn’t truly find her voice until 1963. Angered by the deaths of Civil Rights activist Medgar Evers in Mississippi and four black schoolgirls in the Birmingham church bombing, Simone composed “Mississippi Goddam” in just twenty minutes. The song, which she called a “show tune but the show hasn’t been written yet,” was subsequently banned throughout most of the South, but it marked the beginning of Nina Simone’s very public political activism. Though she had previously shied away from making protest music, she realized her talents could be used for a greater purpose. “I choose to reflect the times and the situations in which I find myself,” she said once in an interview. “How can you be an artist and not reflect the times?”

As a result, her work after 1963 became far more political and personal, her voice onstage and off crying out for equality and justice for all. She began regularly incorporating more spirituals and protest songs into her concerts and live appearances, fusing them with jazz, soul, and, as always, classical music. Her performances also often featured monologues and exchanges with the audience in between long sets of music. Nina Simone’s concerts took on a hypnotic quality, earning her the nickname the “High Priestess of Soul” for the way she could command attention and seduce audiences. Nina’s unmistakable voice dripped with pain, sex, anger, love, yearning, and above all, a freedom that she fought tirelessly to attain in a world that continually pushed back against her. This makes songs like “I Wish I Knew How It Feels to Be Free” all the more powerful; you hear her weariness and sadness transform into an angry battle cry in just 3 minutes.

Nina Simone may not have enjoyed the same commercial success as some of her contemporaries (such as Aretha Franklin) due to her outspokenness, but her impact is undeniable. She could play pretty much anything and did, covering many of the best rock artists of her time from Bob Dylan and the Byrds to the Fairport Convention and the Beatles (“Here Comes the Sun” and especially George Harrison’s “Isn’t It A Pity” are musts). She elevated each artist’s work while also making it seem like each song was written just for and by her. Simone paved the way for many of today’s best artists of color like John Legend, Alicia Keys, and Lauryn Hill, and the political messages behind her music are still (unfortunately) as necessary now as they were during the heydey of Civil Rights. Nina Simone was not just a voice, she was and still is the voice for all those fighting against oppression and injustice. And so she rightly stands out in her Rock & Roll Hall of Fame inductee class because she’s not like anyone else. Nina Simone is truly one of a kind.

PS. Leonard Cohen was another powerful voice for social change, as was Laura Nyro.