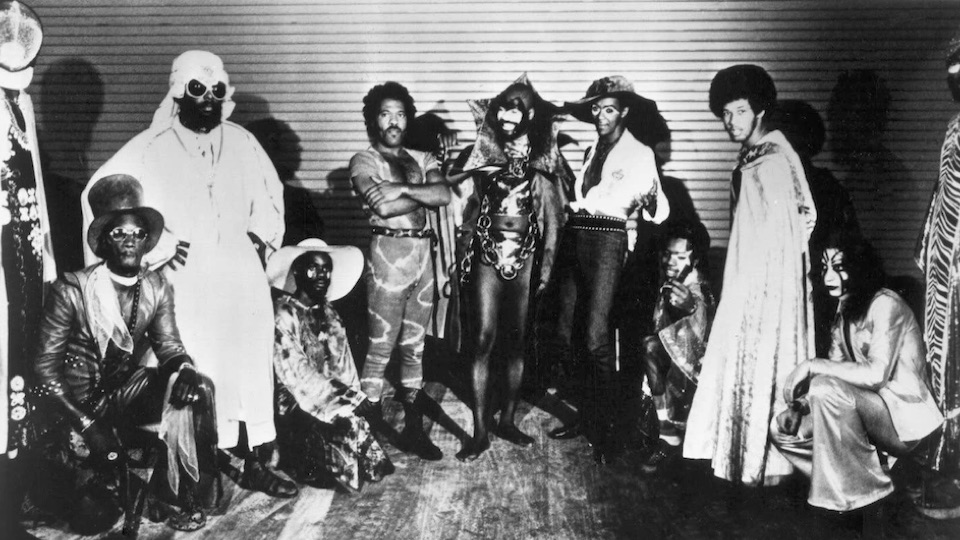 1974 was a roller-coaster year defined by the kidnapping of Patti Hearst, the “Rumble In The Jungle” between heavyweight champion Muhammad Ali and his formidable opponent George Foreman, and the resignation of President Richard Nixon. In the world of Black popular music, Funk further solidified its position as the new standard bearer of the genre. One of Funk’s prime progenitors, Parliament-Funkadelic, was about to initiate a double-barreled assault on the record-buying public. In that year, the Parliament wing of the empire had resurfaced after a four-year hiatus, after their 1970 debut entitled Osmium on Invictus Records.

The reemergence of Parliament was partially empowered by the return of bassist William “Bootsy” Collins, who came back to the fold after a two-year absence. He emerged, along with keyboardist Bernie Worrell, as the star players on this project. The eventual result: Up For The Down Stroke released on July 3rd, 1974.

Funkadelic would release their sixth album on Westbound records entitled Standing On The Verge Of Getting It On almost around the same time. What was unique about this outing was the fact that lead guitarist Eddie Hazel would serve as the principal instrumentalist, as he co-wrote every track on the album. The following analysis of this double-barreled shot of P-Funk attempts to explain how one hand washes (or in this case), “Funks” the other.

UP FOR THE DOWN STROKE

Parliament’s second album in four years was released on the newly formed Casablanca Records, headed by longtime record industry stalwart Neil Bogart. The album’s title track brought Parliament back into the top ten on the Billboard R&B singles charts for the first time in seven years. It would also be the song to solidify the dynamic songwriting team of George Clinton, Bootsy Collins, and Bernie Worrell (this time along with vocalist Fuzzy Haskins).

The cosmic energy of Funkadelic creeps slightly into the mix on the remaining seven tracks.

“Testify”, a remake of the 1967 Parliaments hit, receives the full thrust of Funk modernization. The remake pounds hard with lead vocals shared by George Clinton and Garry Shider. A second version which is primarily a group vocal mix was featured on the 2003 CD reissue.

“The Goose” and “Whatever Makes Baby Feel Good” represent the only contributions by guitarist Eddie Hazel. It also isn’t surprising that those two tracks inject a considerable amount of Funkadelic vibe into the album, particularly Eddie’s sparse lead playing on the latter cut.

The aforementioned 2003 CD reissue features the previously unreleased track called “Singing Another Song”, which swims in the influence of Sly and the Family Stone. To the hardcore P-Funk fan, it sounds like what could be the first Clinton-Collins-Worrell composition. The alternate take of “Down Stroke” features Clinton rapping about the eternal badness of the U.S. Funk Mob, reminding us that to each his reach and more than 3 shakes is a beat.

Related: “To Hell With Concept Albums: Parliament Did A Concept Series”

STANDING ON THE VERGE OF GETTING IT ON

Almost simultaneously, Funkadelic released their sixth album on Westbound Records, reaffirming their role as the leading foot soldiers of Black Rock. Many of the tracks on this album are still performed by the Funk Mob to this day, particularly the title track, as well as “Red Hot Momma” (a remake of the 1971 Parliament single released on Invictus Records). The “Red Hot Momma” single originally featured a non-LP B-side called “Vital Juices” which is basically a continuation of RHM.

The album takes an unexpectedly sympathetic turn with the track “Jimmy’s Got A Little Bit Of Bitch In Him.” Displaying a surprisingly compassionate lyrical approach to alternative lifestyles over a playful but direct blues groove, the Funk Mob prove themselves to be light years ahead of their time in recognizing the LGBTQ community.

5 comments on “Parliament-Funkadelic: Standing On the Verge … of The Down Stroke”