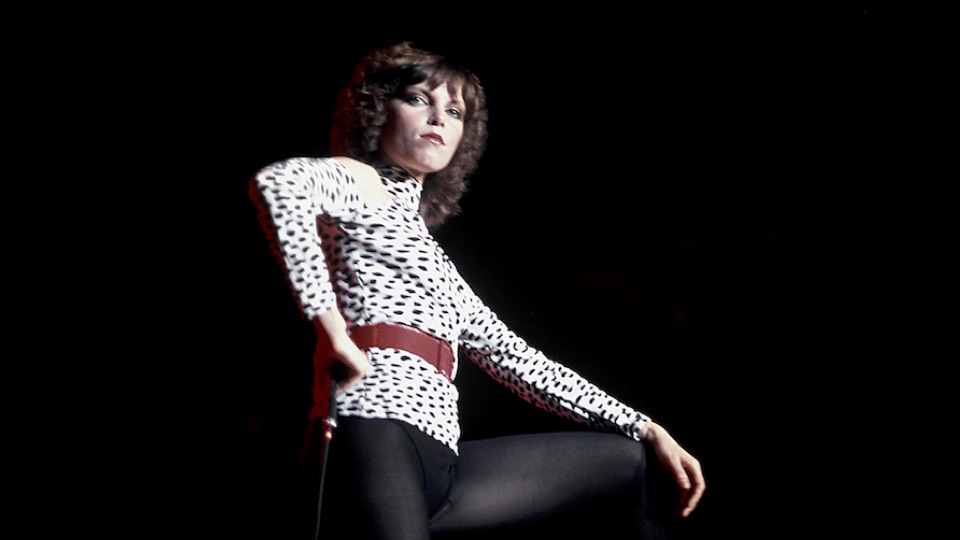 Like any rock star who has had to pay her dues, Pat Benatar performed for some tough crowds in her early days. Growing up in Lindenhurst, New York, she had plans to study opera at Juilliard and practiced her scales at home every day, inciting the wrath of the neighborhood kids playing ball in the street. “Andrzejewski,” they’d scream, hurling rocks at the house in protest, “Shut up!”

These exchanges would prove oddly prophetic, given that Benatar spent her reign during the ’80s hurling her own brand of tough, confrontational rock at audiences, who were comprised by then of millions who couldn’t get enough of her 4-octave soprano range. In fact, turning the tables on, and pushing back against, restrictions and expectations placed on women in music and in life, is a big part of Pat Benatar’s pioneering legacy, one solidified by her sophomore album Crimes of Passion, the one that put her on the map. It featured her signature song, the note-perfect “Hit Me With Your Best Shot,” hers was the second video ever played on MTV, and it won her her first Grammy. But it was her debut album, In the Heat of the Night, which laid the groundwork for all that was to come, and it’s the record that let her showcase her entire repertoire of skills by incorporating styles that would later be discarded as she cultivated her sound. What’s more, it was those skills and experiments, largely overlooked, that were every bit as iconoclastic and revelatory as the more bombastic hits. Even the parts that don’t hold up are worth revisiting the record after 40-plus years.

“Heartbreaker” tears out of the gate with a menacing guitar riff. In a commanding tone, Benatar lets the titular lothario know she’s willing to play his game to suit her own ends but that he’d better watch his step. She would repeat this formula to even greater effect the next year with her snarling version of The Rascals “You Better Run.” “No You Don’t” is truly hard rock with a punishing chorus one could easily hear Bon Scott or even Robert Plant singing.

“We Live for Love” sounds like disco-era Blondie, and is the first in a series of Benatar’s choruses that mount incrementally before exploding into jubilation (the jewel in this crown being “Shadows of the Night” from 1982’s Get Nervous). Too many singers barrel through notes simply to demonstrate their chops. Benatar uses her professional control to soar effortlessly along the scale (higher still considering she is singing her own gorgeous harmonies), before settling gracefully back on the ground. Her songs are refreshingly free of melisma and meandering improv. She knows what she’s capable of. She doesn’t have to constantly prove it.

Benatar’s talent and training allow her to sing anything, and on this album, she attempts a little of everything, to mixed results. “If You Think You Know How to Love Me,” where chorus and verse are nearly indistinguishable from each other, and the title track, unfortunately, amounts to little more than filler. Luckily, with her classical background, she at least knows how to tell a story through song, filling out each note with atmosphere and characterization. “My Clone Sleeps Alone,” describes a world inhabited by doppelgangers who’ve reached a state of dubious perfection void of human emotions or appetites. It sounds like a number from a once-futuristic, now-dated musical. When she sings, “She’s programmed to work hard/she’s never profane/She won’t go insane, not ever,” her haughtiness makes a mockery of the increasingly unreasonable expectations placed on women at the dawn of the 80s. Similarly, on Rated ‘X,’ a song about a woman who pampers herself during the day with luxuries afforded by her very nocturnal profession, her affectation is ironically coquettish. These touches are subtle, but they pull their weight.

It’s her nearly-forgotten cover of John Mellencamp’s “I Need a Lover,” though that is the most revelatory, even revolutionary, thing she’s ever done. “I need a lover who won’t drive me crazy,” she sings, “Someone to thrill me, and then go away. Someone who knows the meaning of, ‘Hey, hit the highway’.” She’d mocked kittenish innuendo and used her tough-girl persona to protect herself from baddies, but on this simple song she truly kicked down the last barrier to the boys’ club: to treat sex like a delivery service, to treat a pining lover like a pest, to openly declare yourself not just horny but ornery. To have a sense of humor about the whole thing. And only four minutes into her musical debut.

The closer “So Sincere,” is a fantastic New Wave jam that brings the album’s theme full circle. She waxes sardonically, in the tone of a bored teenager, about the stifling mundanity of long-term love, and the music plods gamely along. When she talks about escaping, (“I’m gonna smother if somebody don’t move”) the pace quickens in response, with a guitar riff that playfully bookends the one that opened the record. As the riff fades out it scampers ahead, bidding the listener to follow, onto what would be a future full of hits, but it’s a bit of a watershed moment, too. Songs like “So Sincere” are the kind of creative chances a new artist can take in the beginning, while still establishing her sound, not yet beholden to the brands she’s built. After 40 years, it still sounds fresh and did as much as any other song in making Benatar a star.