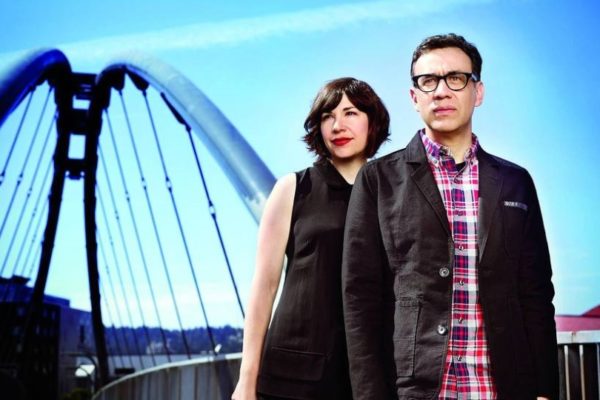 Prior to his long-standing gig as a performer on Saturday Night Live, Fred Armisen played drums in various bands, so it stands to reason that his Portlandia co-creator is the former Sleater-Kinney guitarist Carrie Brownstein. Not surprisingly, many sketches on their hit IFC comedy show have featured various bands, musical performers, and tongue-in-cheek references to the biz. Here are some of our favorites.

Tough times in the music industry cause singer Aimee Mann (formerly of ’Til Tuesday) to moonlight as a housekeeper; Fred and Carrie show their support by badmouthing her late ’80s/early ’90s contemporaries (such as Tori Amos and Sarah McLachlan, who also makes a cameo) then confessing to unlawfully downloading her tracks, and eventually requesting an in-home live performance.

The Indie music festival scene is the target of scorn in this sketch, featuring the Decemberists’ Jenny Conlee. As a solo guitarist billing herself as “Sparkle Pony,” Conlee’s character is mocked, shunned and rejected by self-important security personnel and snobby “band aids.” But fortunately, she is able to comfort herself with vivid mental images of her beloved pony.

3. “Take Back MTV” (Season 3, Ep. 2)
Counterculture heroes Spyke and Iris pine for the old days of MTV: concerned by the discovery that the channel has literally been taken over by “tweens” (including one precocious exec who snarkily quips, “Music is dead!”), they stage a coup by enlisting the aid of several former MTV stars including Kurt Loder and Tabitha Soren Lewis.

Fred and Carrie — playing themselves for a change — are concertgoers who, despite their enthusiasm for the performers, have their tolerance for typical concert indignities such as inconsiderate audience members, long restroom lines, and even the complex logistics of just getting in the door. Yet as much as they relish coming home to their own beds, the skit finds them leaping at an opportunity to secure tickets to another show.

This skit is a perfect complement to “Bahama Nights”: A pair of over-40, FOMO music fans struggle to get past their shared dread of high temperatures, steep ticket prices and the prospect of “sand in your mouth” at a music festival. Their solution? Getting a dedicated drone to deliver a “virtual concertgoer experience” including a signed certificate from the show’s organizers.

PS. Portlandia isn’t Fred Armisen’s only hit on IFC. Read more about his other work in our post Fakin’ It As They Make It: Why “Documentary Now!” Is So Good.