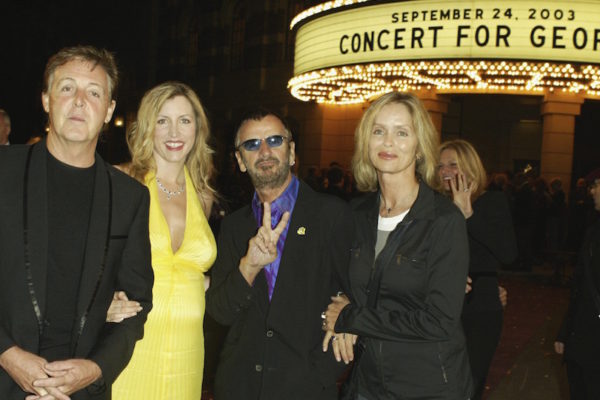 George Harrison fans typically get a little misty over the lovely tribute film, Concert for George. They’ll get a chance to do it again, since — to mark what would have been the late Beatle’s 75th birthday — the film is getting a spruced-up re-release.

The remastered film is being released to select theatres starting on Feb. 20. Response from cinemas has been strong, so Concert for George has already been booked into more than 75 theaters across North America – from New York to California with plenty of places in between (as well as Hawaii). Click here for a full list of participating theaters.

It’s worth noting the folks releasing the film, Abramorama, have a long track record with music-driven movies. In 2016, for instance, Abramorama released the Ron Howard documentary The Beatles: Eight Days a Week – The Touring Years which won a Grammy and two Emmys. Even in limited release, it grossed close to $3 million in the U.S. and more than $12 million worldwide — demonstrating the ongoing appetite for Beatles-related films. Which brings us back to Concert for George.

Directed by David Leland (HBO’s Band of Brothers and the Traveling Wilburys’ video “Handle With Care”), Concert for George captures memorable renditions of Harrison classics like “While My Guitar Gently Weeps” (featuring Clapton on guitar, McCartney on piano, and Starr on drums), “Taxman” (performed by Tom Petty and the Heartbreakers) and “The Inner Light” (covered by Jeff Lynne and Anoushka Shankar). Lynne, Harrison’s longtime friend and collaborator, produced the audio elements of the concert, while Clapton oversaw the entire proceedings as Musical Director.

Audiences loved Concert for George from the start. The film has been certified 8-times platinum and earned a 2004 Grammy® Award. In conjunction with the theatrical release, the sound recordings from Concert for George will also be reissued for the first time, by Concord Music, in all formats, including vinyl collector’s sets.

For more info including listings, please visit the official Concert for George website.

PS. We ask the question, “Did George surpass All Things Must Pass?”  Plus, George spearheaded one of the very first “feel good” charity rock concerts in support of refugees in Bangladesh.