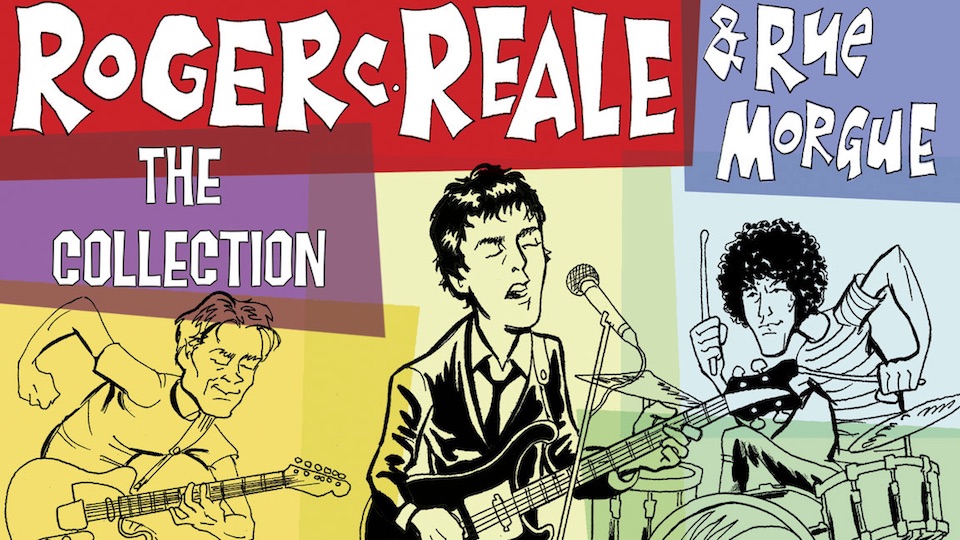 As a singer-songwriter and a general fan of good music, I’m always seeking out inspiring sounds. I live for moments when I hear something new or old that sparks my imagination. Sometimes I stumble across an artist that has managed to elude my radar. Roger C. Reale and the Rue Morgue is an example. Rave On Records recently reissued Reale’s late-70s power-pop gem with G.E. Smith and one recorded but never released featuring Mick Ronson that is currently rocking my world. I recently chatted with Reale about his inspirations and what it was like recording with a couple of bona fide guitar legends.

C.C.: Who are some of your influences, musical or otherwise?

Who were you listening to you at the time of the Rue Morgue recordings?

At the time of recording, the punk/new wave thing was exploding, if not directly on the airwaves, certainly on the streets and on turntables. So, The Clash, The Jam, early Elvis Costello, The Damned, definitely got my attention. In addition, I was also drawn to Dave Edmunds, Nick Lowe, Motorhead, and those early Cheap Trick records.  All that stuff had the energy that infused both Rue Morgue recordings

How did the Rue Morgue band come together? How did you meet the various players?

Upon signing to Big Sound Records, which was tied to Trod Nossel Studio in Wallingford, CT., I began rehearsing the songs for Radioactive in the rehearsal space there. I really did not have a band, as such, but I did approach GE Smith, who was playing with The Scratch Band at the time.  We had similar tastes in music, and in life in general, so we locked in immediately. Jon Tiven, then living in NYC, was basically in charge of funneling talent to the new Big Sound label.  He suggested a friend of his, Hilly Michaels, would be perfect for us.

After finishing the Radioactive LP, I had enough songs for a second one.  GE had committed to a project involving Dan Hartman, which became the Instant Replay sessions, so I needed a guitarist right away.  Enter Jon Tiven, once again; he and Hilly suggested Jimmy McAllister, who also was coming off the road with Sparks.  Jimmy and I hit it off immediately, and we began rehearsing the songs for Reptiles in Motion, which actually was a tongue in cheek working title for the LP.

At some point, Hilly came in and said that he had played Radioactive for Mick Ronson (Hilly had previous ties to the Hunter/Ronson axis), and Ronson, according to him, flipped, loved it, and subsequently asked if he could play on the Reptiles tracks.  We all knew the obvious answer. So, Mick came to CT, rehearsed with us, and again, we recorded all the tracks immediately.

It’s important to note that these songs were essentially fully-formed and arranged.  Mick and Jimmy came up with their parts.  Rue Morgue was an ensemble, not a band of soloists; no jamming.

What were your impressions of Mick Ronson?

Mick was soft-spoken, a total gentleman, as un-rockstar as one could possibly be. We got along really well. He had recently finished working with The Rich Kids, producing their LP, and as I had the recordings, we talked about their songs, the LP, and their potential, having three frontmen, so to speak.

Mick loved Jimmy’s McAllister’s playing, and they spent time talking guitars, arranging parts, and deciding how to approach each track.  Mick immersed himself into the group, and my songs, completely. He was a joy to work with; all-star trappings were dispensed with and we went to work straight away.  Honestly, I think he enjoyed the anonymity of the whole thing: the world knew about him, of course; and many knew about Hilly and Jimmy, but certainly, nobody knew about me.  He was very relaxed.

The songs and recordings are punchy and fresh and hold up really well. Was there an intentional approach to the recording process.

With Radioactive, we absolutely went for a live, in-studio, sound.  We were literally jumping around as it was recorded.  GE had a few overdubs for guitar bits here and there, and I had some harmony bits on vocals.  But essentially it was recorded live.  We definitely went for an in your face approach.

With Reptiles … the songs were pretty much fully formed.  However, we wanted to progress from Radioactive, to spend more time on the songs, as far as production was concerned. It was never considered finished; we all agreed we’d come back and finish it off at some point.

Did you come in with fully-fleshed out demos, or did a lot of things come together in the studio?

I was completely prepared as far as what I thought the approach should be for all the songs on both Radioactive and Reptiles.  Obviously, GE, Hilly, Mick, and Jimmy provided their own personalities to the tracks.  But, it should be noted that both LP’s were the results of a GROUP at work, not a singer with a backing band.

As I understand it, “Radioactive” received some pretty good press at the time. Why do you think the band didn’t really take off after that?

Radioactive, wherever it was heard, received great press.  Basically, the problem was nobody heard it.  As it turned out, Big Sound did not really have the machinery to compete with the larger labels.

Related: “The 3 Greatest Rockers – Who Never Played A Note”

Why was Reptiles in Motion never released back in 1979/80?

Reptiles was recorded and then shelved (for 40 years), mainly due to the demise of the Big Sound label.  At one point, Big Sound was in partnership with Decca/London. They repackaged Radioactive, with two additional tracks (included on The Collection), and a single, “Stop & Go” b/w “Dear Dad.”  Decca also sent over Rocking Russian graphics, which had designed covers, at that time, for Elvis Costello and Bram Tchaikovsky, among others. There was an entire photoshoot with Jimmy, Hilly, and me.  So, we felt we were finally getting somewhere. Then everything came to a halt, Big Sound was no more, and Reptiles stayed on the shelf.

How does it feel to finally have it widely available to the public?

I’m thrilled and grateful. Early reviews and reactions have been very positive. No one seems to see this as a nostalgia trip of what might have/could have been. That’s fantastic. Of course, I think the songs are as vibrant and relevant now as they were then.

0 comments on “Roger C. Reale and the Rue Morgue: A Power-Pop Gem Rediscovered”