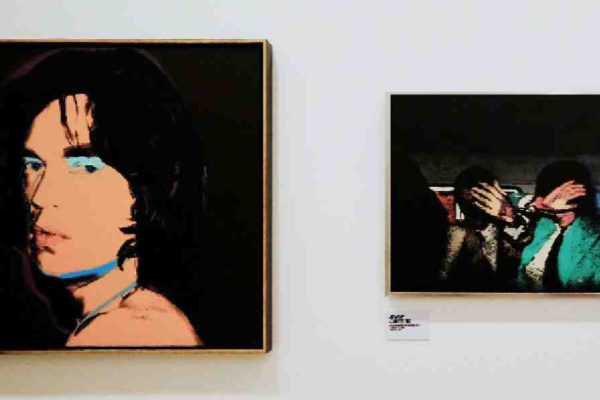 Remember when Chuck Klosterman’s New York Times article entitled “Which Rock Stars Will Historians of the Future Remember” stirred up all that heated discussion last year? The Beatles, Elvis, Dylan, Chuck Berry…all had their outspoken advocates. Now, somewhat belatedly but persuasively, “Exhibitionism” — a traveling pop-up museum at Chicago’s Navy Pier — makes a solid case for The Rolling Stones. From its first gallery (a video montage collapsing the band’s multi-decade career into a few minutes) on through the 3-D concert footage of their signature song “(I Can’t Get No) Satisfaction,” The Stones repeatedly live up to their hard-won nickname “The Greatest Rock and Roll Band in the World.”

The band clearly has a lot going for it, not least of which is a good origin story: Two British schoolmates reconnect upon discovering a shared interest in American jazz then form a band that skyrockets to fame. Just how humble their roots are can be seen by way of “Exhibitionism”‘s ashcan-real recreation of their early digs at Edith Grove in London. The kitchen is pure filth with egg-encrusted tableware, half-smoked cigarettes, and an overall film of grime; the bedroom across the hall features a pair of dirty underwear on the nearest bed. Even the living room, while cleaner, still screams slovenly bachelor pad.

After this gritty bit of verite, we’re immersed in the music and all its related ephemera including Mick Jagger’s handwritten lyrics, Keith Richards’ palm-sized diaries, the first contract signed by Brian Jones, and the bands first vinyl LP from IBC. If you’re the type who fetishizes guitars, orgasms definitely await as both Ronnie Wood’s Disc Front Zemaitis and Bill Wyman’s Framus Star Bass are among the man instruments on display. There’s even a toy drum kit that Charlie Watts used for “Street Fighting Man.”

What really solidifies the Stones’ claim as THE rock stars for the annals of time may be simply how often they got artists of the first rank to collaborate with them on their endeavors. Who else got Andy Warhol and Robert Frank as collaborators for their album covers and tour posters (not to mention John Pasche who came up with the iconic lips-and-tongue logo)? Who else inspired documentaries by Frank, Godard, Scorsese, and the Maysles brothers? We’re pretty sure the answer to that one is NO ONE. As Scorsese himself says in an interview regarding their cinematic legacy, “all of them are extremely compelling on camera.” And he’s right.

And it’s stills as well as moving pictures. Wall after wall shows Mick, Keith, Ronnie, Charlie, Brian, and Bill all making love to the camera as if they were born to be in the spotlight. Credit in part must go to their fashions — and “Exhibitionism” also devotes some serious space to a costume gallery worthy of the Fashion Institute of Technology: 70 outfits, many of the glam before glam became glam.

0 comments on “The Rolling Stones Are Total Exhibitionists”