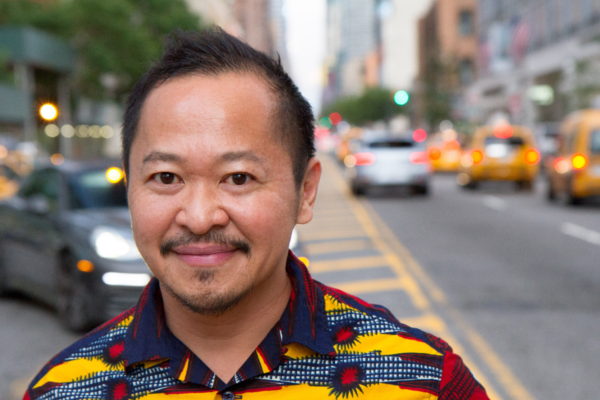 If Pichet Ong’s face looks familiar that’s because you’ve probably seen him on Martha Stewart Live, and Cupcake Wars, Iron Chef America, and Top Chef: Just Desserts. This guy definitely makes the rounds. He’s also a two-time nominee for the Outstanding Pastry Chef award from the prestigious James Beard Foundation, the author of The Sweet Spot (a recipe book cataloguing a hundred Asian-inspired desserts), and the creative mastermind behind the restaurants Qi Bangkok Eatery and ChaanTeng, both not far from Times Square. Though he’s apparently conquering all mediums, Ong still had fresh things to share about what goes on behind closed doors…in the kitchen.

Q: Do you like to listen to music when you cook?

A: I do. I always listen to music when I am commuting on public transport or walking — the playlist is varied but it is mostly country these days as they just have the best lyrics. As I’m cooking, I tend to listen to jazz. My favorites range from single instrument-focused classics like Coltrane, Monk, Miles Davis, or full orchestrated bands like Benny Goodman and Duke Ellington. Bossa Nova such as Jobim and João Gilberto are also terrific. Jazz sets the right mood for me when working, so I’m able to focus on what I’m doing with my hands while listening.

Q: What kind of music do you like playing in your restaurants?

A: I like to play all kinds of music at the restaurant, but it really depends on the theme. I grew up following current pop music from the early 1970’s with the Carpenters to disco with Chic and to British hits and R&B of the 90’s. Those songs are now considered classics and retro — and they tend to be fun — particularly with a more mature or international crowd.

Q: You’ve appeared on TV quite a bit. Is there one show that has resulted in the most recognition on the street?

A: I would say of all the shows that people recognized me the most is my early shows of Iron Chef America. Back then (2005-2006) there were fewer competition cooking shows and pretty much everyone watches that. There were only three episodes of it, far fewer than the 14 episodes I appeared in for Cake Wars and Sugar Dome, but people still remember me in them.

A: I don’t watch much cooking or food-related shows on TV as I don’t find them entertaining or educational for me. But Throwdown! with Bobby Flay is great because he’s a great cook and always has interesting contestants — and it’s part reality. I like it when it includes travel so Great Chefs, Great Cities was fun and educational — there hasn’t been anything like that since. Netflix’s Chef Table is great particularly when lesser-known chefs are featured.

Q: Is there a cookbook you’d recommend?

A: I always go back to the classics like Fannie Farmer, Joy of Cooking, or the collections of Cook’s Illustrated. Those books have been well tested over several decades.

Q: What’s your favorite thing to cook and why?

A: I love making custards (steaming or freezing them), and baking breads and cookies — probably why I ended up doing more pastry in my career.

Q: You’re best known for your desserts. Do you have any guilty pleasures in that department?

A: I love eating chocolate bonbons and candies. Probably should cut down, particularly when it comes to store bought or mass market products.

PS. If this interview makes you hungry for some chef documentaries, check out CultureSonar’s pieces on Chef’s Table or Jiro Dreams of Sushi.