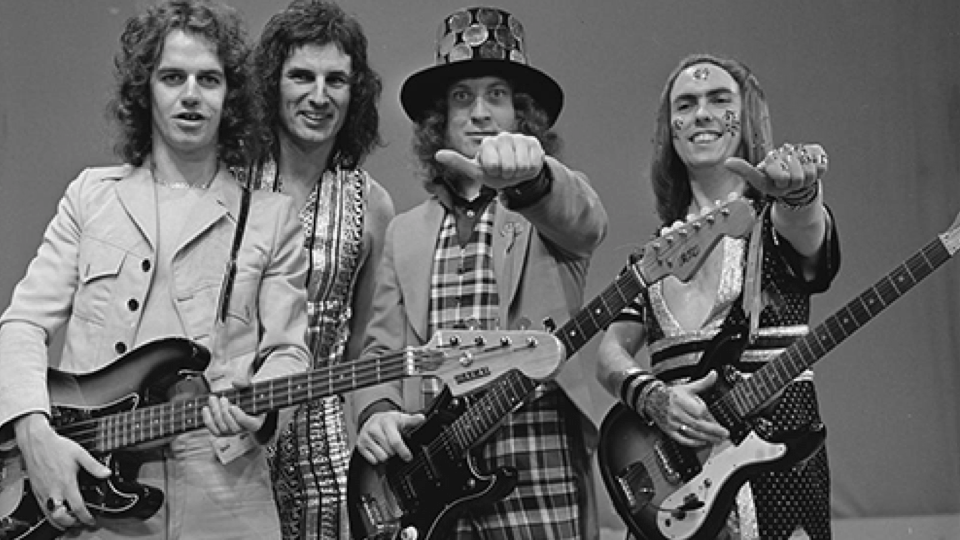 In the mid 1970s, as glam was threatening to upend everything The Beatles strove for, there came the sound of a frenzied Wolverhampton quartet, who not only recognized the integrity of their Liverpudlian predecessors but came up with a sound that carried on the D.N.A into the fiery centers of the stadium oriented decade. It was Slade, a riotous act who delivered punch and precision in their albums, albeit through a selection of singles that were destined to annoy teachers up and down Britain.

From the attack of “Look Wot You Dun”, to the more smoldering symphonic backdrop of “Everyday”, Slade was every bit as melodic as Paul McCartney’s group – albeit a band that was roguish in their appearance, and more rugged in their live performances.

Indeed, the band represented everything McCartney had hoped the Get Back sessions might produce, which might explain why the bassist spent much of the 1970s writing dippy love ballads instead of urbane rock tunes. Vocalist Noddy Holder impressed John Lennon with his phrases, workouts, and scat styles, but there was more to the band than disembodied yelps and debauchery.

Like McCartney did for The Beatles, it was bassist Jim Lea who worked on the band’s arrangements, constructing the melodies in an effort to make them earnest and learned. Typically, Holder transformed them into something more immediate, but it was the yearning and the howling that impressed listeners, who were both engaged and chastised for their efforts.

Slade spent little time in the studio but engaged with the spontaneity, confident in their efforts to make danceable and direct music. “I gave an interview a few years ago about the Slayed? album,” Lea recalled in 2018, “and I told him we had two weeks to put together the songs, now people have two or three years to record an album. We didn’t do Wembley gigs in those days- we might have done the Wolverhampton cinema and things like that. I was the musician, but there were no virtuosos in the band. But there weren’t in the Beatles or Stones either, we were just a great band!”

Don Powell’s drums helped elevate the band to newer heights, and although some of the more mellifluous vocals may have led to risible hair metal acts Guns N’ Roses and Motley Crue, Slade were always committed to the essence of the performance, delivering tunes that were searing in their delivery, yet fragile in their basis.

It shows their commitment to their home country that they continued to write from a British perspective at a time when many of their peers (David Bowie, Ozzy Osbourne, and McCartney spring to mind) were trying to be more American. Instead, they continued to marry melody with metal, which might explain why the bouncy “Merry Xmas Everybody ” is such a festive treat, fifty years after it was first issued.

Guitarist Dave Hill still leads an iteration of Slade, and by all accounts, they know how to put on a show. But there’s something about those 1970s singles that are unimpeachable even by his admirable standards. They go beyond Nirvana, they fly past Valhalla. They become Beatles.

2 comments on “Slade: The Heavier Beatles?”