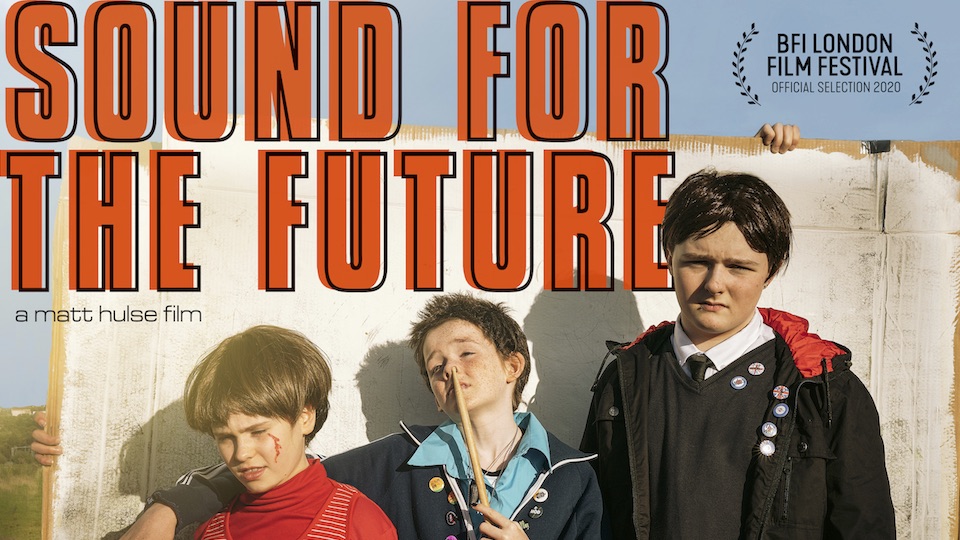 Unless you happened to be in filmmaker Matt Hulse’s mother’s house in Cambridge, UK in the late 1970s, you’ve likely never heard of The Hippies. Billed as Britain’s youngest punk band and inspired by The Sex Pistols and The Clash, The Hippies were formed in 1979 by Matt Hulse (then 11 years old), his brother Toby (then 12), and sister Polly (then 8). The story of this bizarre group and their one cassette album, A Sound for the Future, is lovingly reconstructed in director Matt Hulse’s docudrama (named after the album), premiering at this year’s BFI London Film Festival.

As antithetical to punk as writer E.M. Forster may be, his quote about memory is a good place to start in order to understand the free-wheeling cinematic journey that Sound for the Future is: “Unless we remember, we cannot understand.” It’s this need to rebuild the past that’s at the heart of Hulse’s childhood story. The Hippies performed ticketed live shows for their mother’s chaotic group of friends, proud bohemians of the ramshackle Cambridge squat scene. Through archival footage, photographs, animation, the music of the time, and reconstructions of key episodes from his past, Hulse attempts to understand his odd, fractured childhood against the backdrop of Thatcherite Britain.

One of the main ways Hulse brings his film to life is through “reforming” The Hippies by casting members of the Scottish Youth Theatre in Glasgow to play Toby, Polly, and himself. From capturing their auditions to filming the hair and makeup sessions that allow these Gen Zers to embody the spirit of late 70s post-punk, Hulse sees his childhood played out in front of him, allowing him to reflect on the odd freedom his siblings and he had. He gets the theatre members to play tracks from the DIY album, using cardboard boxes, chopsticks, beans in jars, and other bric-a-brac instruments. They recreate the sound of The Hippies through songs about rabies (“Rabies”), the assassination of JFK (“Dallas City Ghost”), and existential questionings of the universe (Terra Nova”).

Featuring music from XTC, Gang of Four, Sleaford Mods, The Stranglers, Ought, and, of course, The Hippies, Sound for the Future is a kaleidoscopic investigation of family, history, and youth through the lens of a DIY post-punk aesthetic. The film touches on the divorce of the Hulse children’s parents and the lingering bitterness the director feels towards his brother who, it’s suggested, is the one who broke up the band. Recurring images of plates breaking, and of a hand grasping at thin air through a car window suggest the fractured feelings Matt Hulse still has about his family’s history and his attempt to hold onto defining moments of his past.

The bricolage-type format of the film is, in itself, a post-punk artistic expression, which echoes the truncated nature of memory and “truth.” Polly reads extracts of her childhood diary and Ruth, the mother-manager, speaks to the camera about her memories of her children’s band. We get others’ recollections, but the story, mostly, is Matt Hulse’s rendition of the past in all its blurry glory. And somewhere, between the school-reports, handwritten lyrics, and cardboard cutouts, lies The Hippies’ truth.

More than just a chance for Matt Hulse to meander down memory lane, Sound for the Future celebrates the power of creative resistance that unites young people across generations. Seeing the young actors from the Scottish Youth Theatre learn about Hulse’s slice of musical history is endearing in the way nostalgia almost always is. When asked what they would sing about if they had their own band, the Gen Z-ers answered with topics like climate change, body image, and pollution. The film reminds us of the power younger generations have in shaping our global conversations.

The Hippies may not be universally known, but their spirit of rebellion and youthful creativity is one that will resonate with many. Sound for the Future is charged with the active drive our world is seeking from youth movements today. As Matt Hulse tells the younger embodiments of his siblings and himself, “Noise and Silence: those are the two options you have.” So here’s to encouraging the “noise” of the future. If, as history implies, the youth are once again going wild, we could do far worse than following them into the wilderness.

1 comment on ““Sound for The Future”: The World’s Youngest Punk Band”