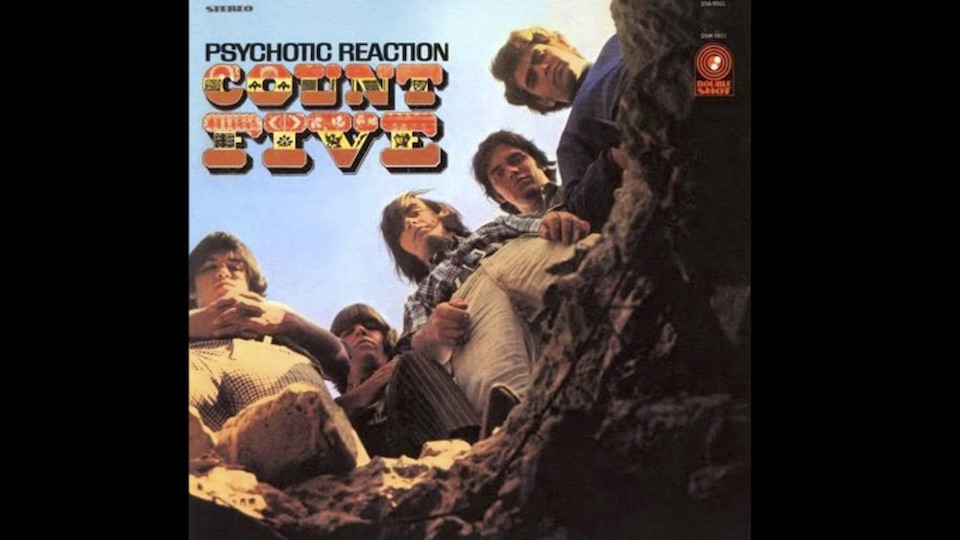 When we refer to a band as a “one-hit wonder” it’s often a bit of a misnomer, because the group in question released other songs that landed further down the charts but didn’t quite make the Top 20. In the case of the Count Five, whose guitar-driven classic, “Psychotic Reaction,” reached number five, the band really did strike gold just once. The core of the group, guitar player John “Mouse” Michalski and bass player Roy Chaney, started out playing surf music in several San Jose bands, including Johnny & The GTOs. When the British Invasion hit it big, the band changed their name to the Squires and altered their musical style to straightforward rock and roll. The group’s lineup solidified to include singer and harmonica player Kenn Ellner, rhythm guitarist Sean Byrne, and drummer Craig “Butch” Atkinson.

The newly christened Count Five played numerous shows in the San Jose area, garnering a solid reputation, even though most of the band was still in high school at the time. San Jose was home to a thriving music scene during the mid-1960s. Other bands performing in the area included the Syndicate of Sound, the Chocolate Watchband and The Golliwogs, who later became Creedence Clearwater Revival.

The Count Five’s energetic live gigs caught the attention of local DJ Brian Lord, who landed the group auditions with several record labels. Most of them turned the band down flat. Lord finally got the group signed to Double Shot Records, a Los Angeles label. “Psychotic Reaction,” penned by Byrne, was already a central part of the band’s live shows, and the label was interested in recording the song as a single. The hard-driving, Yardbirds-style number features the twin guitar attack of Michalski and Byrne, distortion-laden production and the memorable line: “And it feels like this!” The song was equal parts rave-up, low-fi garage rock, and a blast of proto-punk attitude. Originally, the label considered another tune by the band, “They’re Gonna Get You” as their first single. That song eventually became the B-side, and “Psychotic Reaction” got the nod as the A-side. That turned out to be a great decision. The song rocketed up the charts, hitting number five in June 1966. The group toured extensively, sharing the bill with bands like Buffalo Springfield and The Doors. They also appeared on TV shows like American Bandstand, playing their now-ubiquitous hit.

As quickly as the band had tasted success, things began to derail. The label pushed them to rush out an album in order to cash in on the success of “Psychotic Reaction,” even though the group felt they didn’t have enough strong material ready to record. During the sessions for the album, they often clashed with their producers regarding the content of the record. The album, also called Psychotic Reaction, was released in 1967. Despite a few solid songs like “Pretty Big Mouth,” and a pair of Who covers, including “My Generation,” the album didn’t catch fire with the record-buying public. The band’s next single, “Peace of Mind,” stalled towards the bottom rung of the charts. The group issued a couple more 45s, but nothing caught the attention of listeners like “Psychotic Reaction.” The band members started to go their separate ways, moving on to college and other interests.

Related: “Etta James and ‘Roll With Me Henry'”

The Count Five broke up in 1968, and that seemed to be the end of the line. However, like many of the best rock and roll stories, things really didn’t end there. “Psychotic Reaction” continued to get radio airplay throughout the years. The song also gained a second life when it was included on Lenny Kaye’s much-revered 1972 rock and roll compilation, Nuggets: Original Artyfacts from the First Psychedelic Era 1965-68, alongside tunes by other garage rockers like The Shadows of Knight and The 13th Floor Elevators. Thanks to that influential collection’s success, the song was heard by a whole new generation of fans. Bands like Television, Tom Petty & The Heartbreakers and The Cramps have covered “Psychotic Reaction,” and the song is a favorite among garage rock aficionados. The Rock and Roll Hall of Fame selected the tune for their list of “500 Songs That Shaped Rock & Roll.” Not bad for a one-hit wonder!