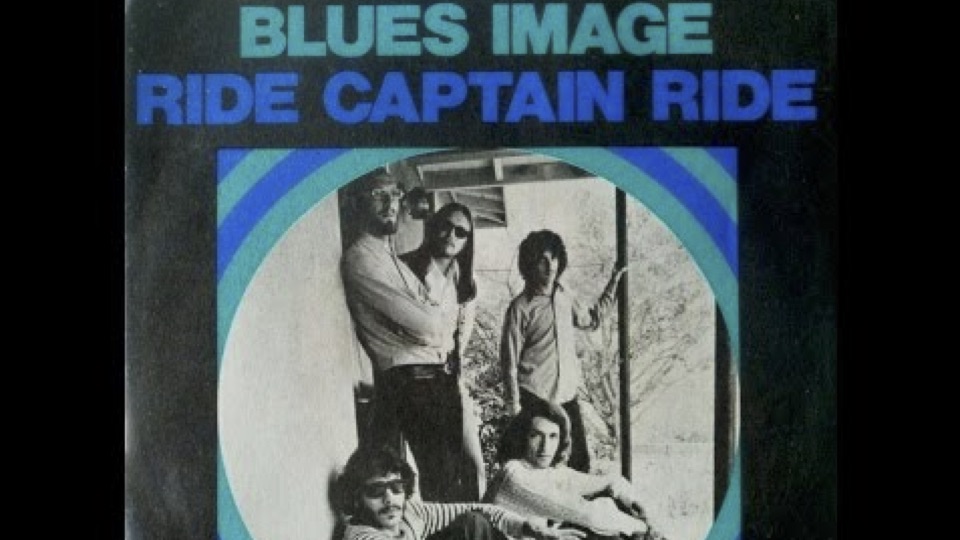 “One hit wonder” songs often hold a special place in a listener’s musical memories. Like many other songs, hearing them can bring you right back to a specific time and place. I remember catching the distinctive keyboard intro to “Ride Captain Ride” on a transistor radio while playing in my backyard as a kid, at a time when AM stations still played an eclectic selection of music. The song, the lone hit by Blues Image, sailed up the charts in 1970, eventually docking at number four. The band first came together in Florida in 1966 and consisted of guitarist Mike Pinera, keyboard player Emilio Garcia, percussionist Joe Lala, bassist Malcolm Jones, and drummer Manuel Bertamatti. When Garcia left to pursue other interests, Frank “Skip” Konte took over behind the keyboards. The group performed regularly in the Miami area and became the house band at a club called Thee Image, a venue that also featured groups such as Led Zeppelin, Cream and The Mothers of Invention.

The members of Blues Image eventually relocated to Los Angeles, where they landed a deal with Atco Records. The band recorded and released their self-titled debut in 1969. The record was an intriguing mix of Latin-infused rhythms, heavy rock, and blues, but the single from that disc, “Lay Your Sweet Love On Me,” didn’t make a dent in the charts. While working on the sessions for their second album, Open, Pinera and Konte were fooling around with some riffs on a Fender Rhodes keyboard. Pinera came up with the lyric “Seventy-three men sailed up from the San Francisco Bay…” after looking down at the instrument and realizing it had seventy-three keys. The rest of the song sprang to life from there, and when the album was released in 1970, “Ride Captain Ride,” was issued as a single. The song was a huge success, garnering a significant amount of airplay, and eventually becoming a million-seller.

Pinera didn’t perform the guitar part at the center of the song. Kent Henry, who went on to replace Pinera in the band after the guitarist left the group to join Iron Butterfly, plays that memorable solo. Pinera did play the guitar parts at the conclusion of the song, but he actually left the band before the sessions for Open were completed. Blues Image later recruited a new singer, Denny Correll, who along with Henry and the rest of the group, recorded Red, White and Blues Image, which turned out to be the band’s final album. The group’s last two singles “Gas Lamps & Clay” and “Rise Up” didn’t match the success of their trademark hit, and they disbanded in 1970.

Kent Henry went on to join Steppenwolf, while Frank Konte ended up in Three Dog Night and Joe Lala played with Crosby, Stills, Nash, and Young, as well as the Stephen Stills led group, Manassas. In addition to Iron Butterfly, Pinera also spent time as part of Alice Cooper’s band. “Ride Captain Ride” continues to be a favorite among classic rock and one-hit-wonder fans. The song was memorably covered by Blood, Sweat, and Tears as part of their 1975 album New City. Vermont based rockers Phish frequently played the song at their live shows during the early to mid-2000s, with keyboardist Page McConnell providing the vocals. Whoever’s performing the song, that chorus which kicks off with “Ride Captain, Ride, upon your mystery ship…” has that earworm quality that will ensure it gets stuck inside your head for days afterward.