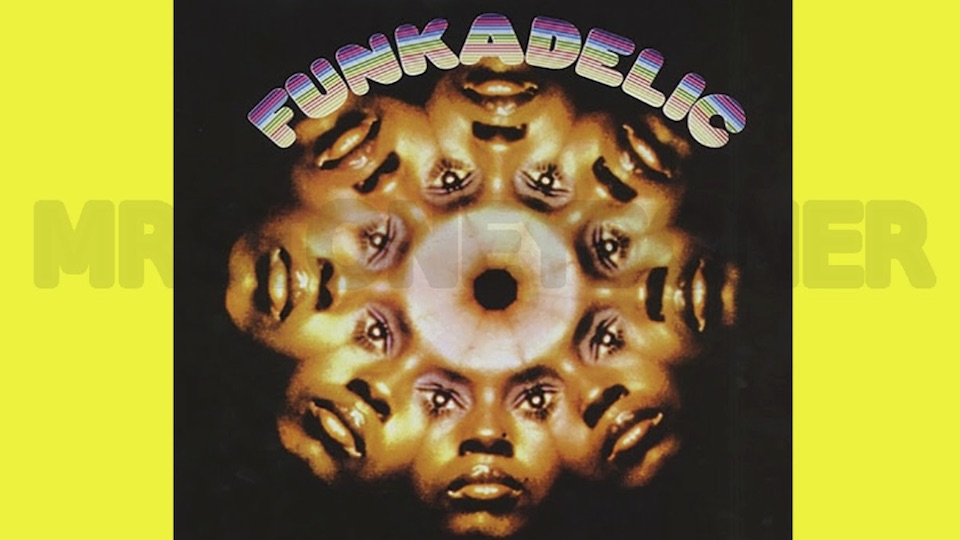 Fifty years ago, Funkadelic landed on earth to Free Our Minds!

The story of Funkadelic, the Soul-psychedelic wing of George Clinton’s P-Funk empire starts at a small independent-minded record label based in Detroit, Michigan called Westbound Records, presided over by entrepreneur Armen Boladian. In January of 1970, the label releases the group’s self-titled debut which sees the backing band take center stage while the lead singers (formerly the Parliaments) provide vocal support.

Funkadelic at this time consists of keyboardist Mickey Atkins, lead guitarist Eddie Hazel, rhythm guitarist Tal Ross, drummer Tiki Fulwood and bassist Billy Bass Nelson (keyboardist Bernie Worrell would join the fold for the band’s second album Free Your Mind… even though his image is featured on the album’s back cover).

Funkadelic was by definition a hallucinogenic Blues project with sizable Funk leanings. More stripped down and minimalistic than any other P-Funk album produced afterward, Funkadelic encapsulates the musical spirit and identity of 1970s-era Detroit. The Band Of Gypsys, Sly and the Family Stone, and George Clinton’s own tenure with various Detroit based record labels during the 1960s would all help to define the mission statement of the band.

Have a listen to some of these early grooves.

Clinton lays down the philosophy of Funkadelic over a slow grinding Funk groove that drips with Cosmic Soul. An alternative musical universe where societal rules are nonexistent, where sexual taboos are fervently pursued (“If you will suck my soul I will lick your funky emotions…”) and Funky music feels good to everyone (especially George). In short, it will blow your Funky mind.

Previously recorded by Jean Carter, Theresa Lindsay, Billy Butler and the Jackson 5, Funkadelic’s rendition of this Hippie Soul stomper features guest appearances from various Motown Funk Brothers alumni including Bob Babbitt on bass and Earl Van Dyke on keyboards. “I Bet You” (issued previously as “I’ll Bet You”) was the second single release from the album, though the album wasn’t released yet. The single featured two different B-sides: “Qualify And Satisfy” and the non-LP track “Open Our Eyes,” also covered by Earth, Wind And Fire.

MUSIC FOR MY MOTHER

The very definition of “Way Back Yonder Funk”, “Music For My Mother” tells the story of raw Funk emanating from “Keep Runnin’ Mississippi” and one individual’s journey guided by the sounds he encountered. The very first single released by Funkadelic features Billy Nelson on bass, drummer Brad Innis, saxophonist Herbert J. Sparkman, and Eddie Hazel on lead guitar.

The third single release from the album features Parliaments vocalist Fuzzy Haskins who also wrote the tune based on the Gospel standard “I Got Shoes, You Got Shoes, All God’s Children Got Shoes.” The track reportedly features guitarist Ray Monette of Rare Earth working the wah-wah pedal to great effect. Funkadelic would perform this track on the Cleveland based music TV series Upbeat shortly after the album’s release.

Originally recorded by the Parliaments in 1968, Side 2 of the LP opens with George Clinton exalting the glory of Funky music. Curiously, the track was never released as a single, but it has been sampled over 200 times by prominent Rappers and vocalists such as the D.O.C., Nine Inch Nails, and Mariah Carey.

The B-side to the first single release of “I Bet You” features Calvin Simon on lead vocals. It represents the only true Blues track on the entire album. Based on a traditional Blues chord structure, “Qualify & Satisfy” also features scorching guitar work from Eddie Hazel.

The eternal question for the ages is answered in a number of very innovative ways. What Is Soul? A ham hock in your cornflakes! What Is Soul? A joint rolled in toilet paper! What Is Soul? A ring around your bathtub! The musical equivalent of a Funky acid trip, Funkadelic lets us know that they are not of this world and that they mean to do us no harm. For all that is good is nasty.