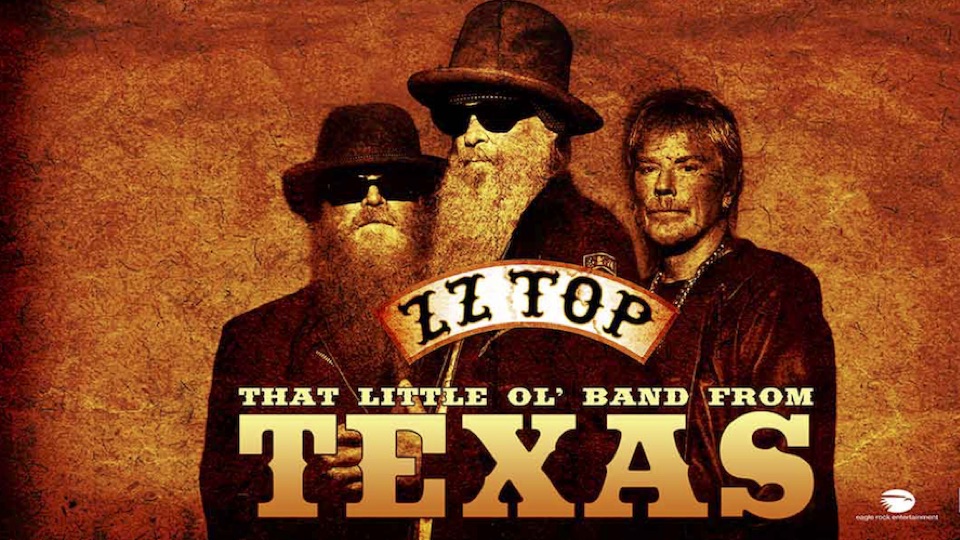 Bill Ham had an idea. Since he couldn’t bring the world to Texas, he’d send Texas out to the world. So, in 1976 the venerable manager of the Texas trio known as ZZ Top sent the boys, Billy Gibbons, Dusty Hill, and Frank Beard, out on an incredibly ambitious tour dubbed “The Worldwide Texas Tour.” The show would feature a massive stage shaped like the state of Texas adorned with buzzards, bison, and rattlesnakes. Four trucks, two years, and one animal trainer later, the band had crisscrossed the country so completely that an entire nation now had firsthand knowledge of ZZ Top’s brand of Texas blues-infused rock mixed with a little “what the hell was that?” The genius of that tour, along with dozens of happy accidents and twists of fate are chronicled brilliantly in a new documentary available on Netflix, ZZ Top: That Little Ol’ Band From Texas. [It’s also just been released digitally and on DVD and Blu-ray via Eagle Rock Entertainment. -Ed.]

Rock docs need three ingredients to be successful: a good story, someone worthy to tell it, and a treasure trove of archival footage. The film checks off all three boxes. Although die-hard fans of the band know most of the stories, band members share nuggets of truth that separate the fact from legend. And why not? After fifty-plus years together as a band, the longest-running line up in rock history, it’s okay to leave some of the mystery behind.

Want to know how three guys stay together longer than the length of time it took your grandparents to reach their Golden Anniversary? Dusty Hill will let you in on a little secret: it’s separate tour busses. There’s probably a lot of truth in that. And while the band’s bassist and drummer Frank Beard reveal their good ole boy, down-home personalities as they spin their yarns, the film reminds us that touring alongside Jim Morrison and Jimi Hendrix as a member of The Moving Sidewalks made Billy Gibbons a quick study on how to be a rock star. And rock stars look the part. Perhaps band pal Billy Bob Thornton said it best, “When you saw them on stage, it was like seeing…Bugs Bunny.” It’s a good comparison, and thanks to Gibbons, most likely developed by design.

Related: “‘Sixty Minute Man’: He’ll Rock You and Roll You”

ZZ Top is a band of innovation and evolution, perhaps more so than any other successful American rock band. The documentary reminds us that ZZ Top is a tale of two bands. The wonderful archival footage chronicles the band’s shift from one that featured nasty guitar licks and thumping bass lines from guys wearing Nudie suits and cowboy hats, to one that embraced the MTV era by producing slick, commercially successful videos. There’s nothing wrong with that, especially when the videos, or more accurately short films, feature beautiful women and what’s now the most recognizable hot rod of all time.

As with any true evolution, it didn’t happen overnight. The film explores the change that started in 1979 with the album Deguello, took a step forward in 1981 with El Loco, and became a cultural phenomenon with the release of Eliminator in 1983. Consider this: six years before what would become ZZ Top’s most successful album, the band had released a greatest hits compilation. Six years! How many bands that truly embraced the MTV era had already accomplished that?

Surprisingly, if there’s a member of ZZ Top that could pull off a reality show, it would be drummer Frank Beard. The guy at the back of the stage is, without a doubt, the least recognizable member of the band, but he pretty much steals the show. When Beard finally got his first big check back in the day, $72,000, he confesses that he spent every penny of it on drugs. With the drummer’s tangy southern drawl, he practically convinces us the purchase was as natural as buying a loaf of bread at the corner store. As for playing drums within spitting distance of a turkey buzzard perched behind his drum kit, Beard didn’t seem to mind at all. In fact, he liked the company.

As far as the documentary goes, the band’s timeline mostly fades away after the Eliminator days, which is the film’s one noticeable shortcoming. But no matter. ZZ Top: That Little Ol’ Band From Texas takes viewers on a magical road trip along the dusty roads of Texas and beyond, playlist provided by Billy, Dusty, and Frank. The only thing missing is the beer and barbeque. Have Mercy.

4 comments on “ZZ Top: Their Netflix Doc Is Not Another Texas Tall Tale”