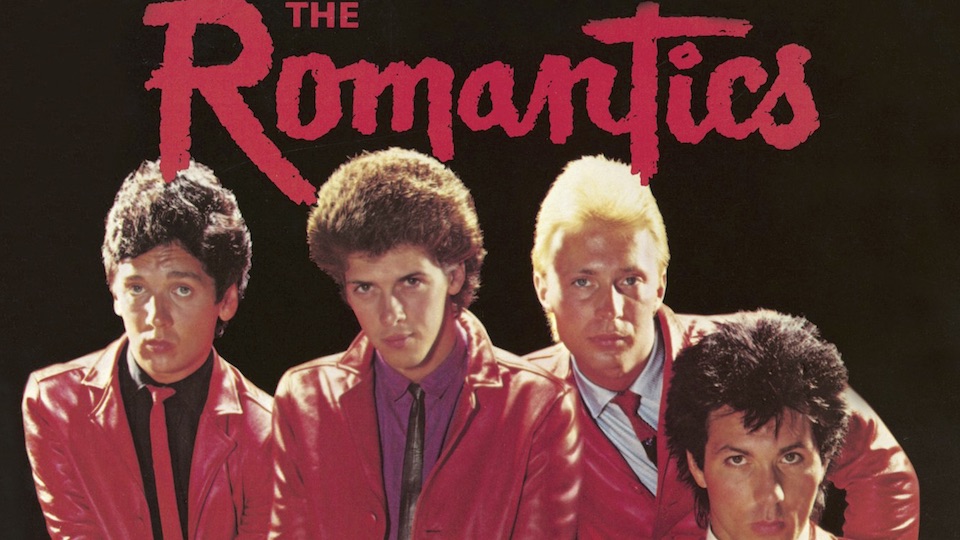 Has then ever been a better name for a band than The Romantics? The foursome is in the rare group of “two-hit” wonders; certainly better than one-fewer-hits, but shy of stringing a run of hits together. They had the look: four handsome guys regularly dressed in red or black leather outfits (Fun Fact: those outfits were made by a local Detroit seamstress who specialized in leather outfits…for a dominatrix clientele) and with the requisite early 80s short, coiffed hair. Their two largest commercial successes include “What I Like About You” (1978), a mainstay for all cover bands, and “Talking in Your Sleep”, which delivered a number one hit in 1984.

Related: “The One-Hit Wonder File: Keep Your Hands to Yourself”

The original lineup, Wally Palmar on rhythm guitar and vocals, Mike Skill on lead guitar and vocals, Rich Cole on bass and backup vocals, and Jimmy Marinos on drums and lead vocals launched from Detroit, Michigan on Valentine’s Day 1977. Major influences included musicians from the local scene including Bob Seger, the Stooges, SRC, and Mitch Ryder and the Detroit Wheels. According to guitarist Mike Skills, the group wanted a punk-like sound but minus the anger or unhappiness that often accompanied that genre, saying they just wanted to persist over the years while “still hav(ing) fun with three chords.” What they produced has since been labeled New Wave and is in good company with bands like The Cars, Duran Duran, New Order, The Police, and Joy Division.

Back in 1977, the band was eager to head out onto the road and released a single with “Little White Lies” on the A-side and “I Can’t Tell You Anything” on the reverse. Soon after, they headed to the East coast. By the way, “Little White Lies” is a popping little tune with a Green Day-lite feel, and “I Can’t Tell You Anything “ is a hard-driving, harmonica-howling ditty. Both are very good songs for debut singles. And yes, both are about three chords.

After finding success via touring, the band signed with Nemperor Records in 1979, releasing their self-titled debut album, which contains the classic “What I Like About You” and a cover of Ray Davies’ “She’s Got Everything.” If all you know about the Romantics is their two hits, do yourself a musical favor and listen to this album. If you’re of a certain age that lived through this time (motioning toward myself), it was an interesting era, as British punk was giving way to something far catchier and more notable. Songs like these were danceable, sing-able, and easily covered by garage bands – so everybody played them. The vocals are tight, with solid harmonies and the guitar work is really good. And it doesn’t hurt to have a harmonica at your disposal.

That was followed by the LP National Breakout in 1980 and a tour of Europe and Australia. The touring tightened their sound even more and led to two albums including Strictly Personal (1981) and In Heat (1984), the latter of which included “Talking in Your Sleep” and “One in a Million.” These helped drive the release to platinum. That was followed by Rhythm Romance (1985). During this time the band was co-headlining or opening acts for major groups such as The Cars and Cheap Trick. Then just like that, they had reached the peak of their commercial success – all within 6 years of their first release.

Also, during this short run, the band experienced lineup changes. In a switcheroo, lead guitarist Mike Skill left the band in 1981. He was replaced by Coz Canier, then returned on In Heat, but instead replaced bassist Rich Cole. In 1985, drummer Jimmy Marinos was replaced by Dave Petratos just before the release of Rhythm Romance. Keyboardist Barry Warner, a Detroit-native joined the band for the ensuing tour.

What followed for The Romantics was ten years in a cloud of lawsuits, feuding former managers, and issues with record labels. They learned “What I Like About You” had been licensed without their knowledge for use in a commercial and sued their manager. In 1990, Blondie drummer Clem Burke replaced Petratos long enough to release the five-song EP Made in Detroit. Eventually, by 1995 the group had settled all lawsuits, regained control of their material, and coaxed original drummer Marinos to return for some touring.

In 2003, they released the LP 61/49, named for lyrics from a Robert Johnson song, and brought back all former contributors to the band to participate, including Marinos, Badanjek, Black Crowes’ keyboardist Eddie Hawrysch, and Luis Resto.   The song garnered critical — though not commercial — success but reinforced their musical talent.  It was named “Most Outstanding National Small/Independent Label” album at the Detroit Music Awards, and in 2011 they were inducted into the Michigan Rock and Roll Legends Hall of Fame.

The legacy of The Romantics is in delivering timeless classics to 80s pop culture and influencing other musicians such as Tommy Tutone and Rick Springfield. Their dedication to keeping their music simple, melodic, and positive gave us two songs that are officially part of the 1980s lexicon. But don’t overlook their other releases; despite not being commercial successes, their albums are packed with great music.

4 comments on “The Romantics: The 80s in Two Songs”