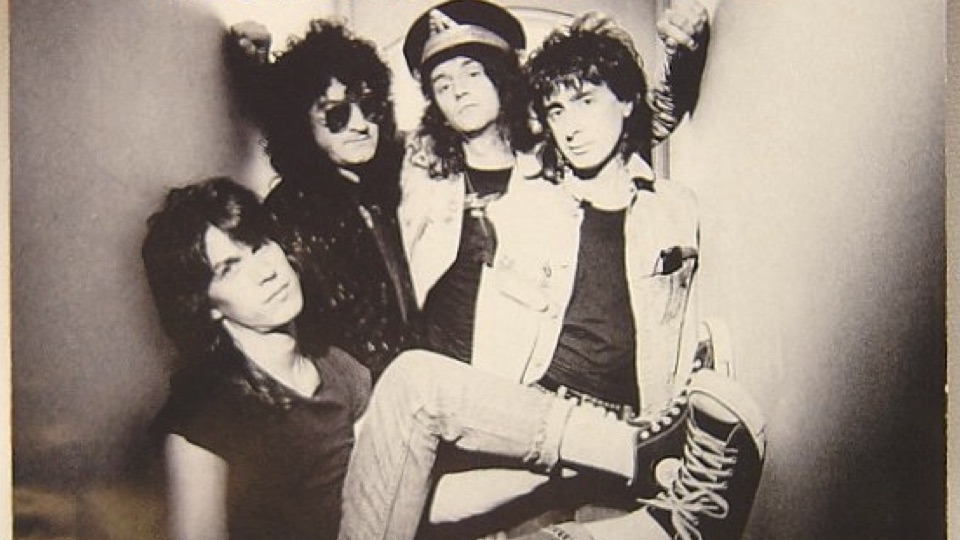 The twangy guitar introduction to “Keep Your Hands To Yourself” is certainly familiar to anybody who listened to rock radio, tuned into MTV, or punched the song up on a jukebox back in 1986. The tune was a sizable hit for the Georgia Satellites, an Atlanta based group that specialized in old-fashioned, guitar infused rock and roll. The band started out around 1980 as Keith and the Satellites, with a lineup that included guitarists Rick Richards and Dan Baird, bassist Keith Christopher and drummer David Michaelson.

The group regularly played local bars and clubs in Georgia and weathered a couple of personnel changes in their early years. Both Keith Christopher and David Michaelson departed and were replaced by Dave Hewitt and Randy DeLay. The band changed their name to Georgia Satellites and went into the studio to record a demo with producer Jeff Glixman. The demo didn’t generate much interest, so in 1984, the band members went their separate ways. However, that wasn’t the end of the road for the group.

Related: “Do You Hear Me? – An Appreciation of Missing Persons”

The band’s manager took the demo to a small British record label. They liked the songs and in 1985, issued them as an EP under the title Keep The Faith. The release received some positive response from reviewers, and Baird later joined up with former bandmate Rick Richards, drummer Mauro Magellan and bassist Rick Price (a trio who had been playing together in a band called the Hell Hounds) to re-launch the Georgia Satellites. The reconstituted band signed up with Elektra Records, and their self-titled debut was released in 1986, at a time when old school rock and roll was in short supply. The album was a resolute blast of no holds barred, straight ahead, bar band music with a dash of country and southern rock tossed in for good measure.

The group’s follow-up single “Battleship Chains” was a sharp-edged rocker, once again featured Baird’s distinctive vocals. The song managed to hit number 86 on the charts. The band also recorded a cover of the Swinging Blue Jeans’ late 1960’s hit “Hippy Hippy Shake” for the soundtrack of the Tom Cruise film, Cocktail. “Hippy Hippy Shake” was the group’s highest-charting single other than “Keep Your Hands Yourself,” reaching number 45. The Georgia Satellites, like Jason and the Scorchers, The Blasters, and The Kentucky Headhunters, mixed old school rock with other genres including country, soul, and blues, and gained a reputation for raucous live shows.

Sadly, their retro-fueled style primarily appealed to dyed in the wool rock fans in an era when hair bands and synth music were in abundance. The group’s second album, Open All Night, was released in 1988. The record featured a cover of the Beatles tune “Don’t Pass Me By” and a number of down and dirty, guitar-fueled selections, including the Faces meets Stones vibe of “Mon Cheri.” Sales for the album didn’t quite reach the heights of their debut, nor did those for their final disc, the critically acclaimed In The Land of Salvation and Sin, which was issued in 1989.

Dan Baird departed the band in 1990, and the group soon disbanded. Baird launched a solo career, scoring a success with “I Love You Period,” from his excellent solo debut, 1992’s Love Songs for the Hearing Impaired. Baird also fronted the band Homemade Sin, which included former Satellite Mauro Magellan. The Georgia Satellites, led by Rick Richards, reunited in 1993 and released a new album, Shaken Not Stirred, and also headed back out on the road to perform live. As for “Keep Your Hands To Yourself,” it’s been covered by The Charlie Daniels Band, Garth Brooks, and Kenny Chesney. The song has remained a bar band perennial and is also a favorite of a new generation of artists, including country singer Chris Stapleton and southern rockers Blackberry Smoke.

1 comment on “The One-Hit Wonder File: “Keep Your Hands to Yourself””