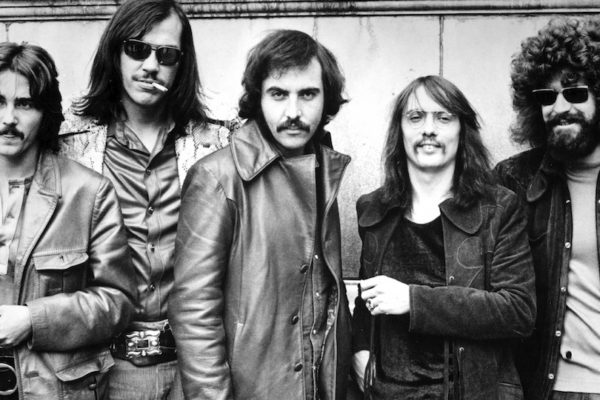 The new release, Steppenwolf at 50, is nothing if not comprehensive. This three-disc set has 41 tracks spanning all thirteen studio albums, plus a new song (“Compared to What”) which had been lingering in the vaults, unheard. Decidedly emphasizing the contributions of John Kay (the charismatic lead singer who’s been the band’s one constant), this Rainman label release samples both “deep tracks” from Steppenwolf’s discography as well as Kay’s solo career, while the third disc spotlights live recordings of classic hits like “Born to Be Wild,” “Rock Me,” and “The Pusher” from the Live at 25 tour, circa 1992.

But before Steppenwolf even existed, there was a Canadian band called The Sparrows which included Kay, organist Goldy McJohn, and drummer Jerry Edmonton. Back in the 1960s, this predecessor played clubs in Toronto and NYC then moved to California in 1966, dropped the final “s,” and met with limited success opening for Moby Grape, The Youngbloods, and The Doors. It was then that Kay met ABC/Dunhill record producer Gabriel Meckler who urged him to reform as “Steppenwolf” — the name,  a nod to Herman Hesse’s psychological novel, much like The Doors’ indebtedness to Aldous Huxley’s The Doors of Perception. Then the magic began.

The first disc starts out with tracks from Steppenwolf’s 1971 For Ladies Only, the album’s title track and the raunchy “Angel Drawers.” Then comes several tunes from Kay’s mid-‘70s solo albums, Hank William’s “You Win Again” from “Forgotten Songs and Unsung Heroes,” and the autobiographical title track from My Sportin’ Life which memorably features Kay on slide guitar. Disc One continues with “Caroline (Are You Ready for the Outlaw World)” and “Skullduggery” — the former by “Born to Be Wild” writer Mars Bonfire; the latter by Bobby Cochran, nephew of pioneer rocker Eddie Cochran. Disc One closes with 1988’s surprising rap version of “Magic Carpet Ride” with Grandmaster Flash and the Furious Five.

Disc Two continues sampled selections of Kay-led songs, from the socially passionate Rise and Shine (1990) including the title track with some wild guitar work by Rocket Rochette. Kay’s influence continues most notably with “Rock ‘n Roll War,” an impassioned tune about issues affecting Vietnam veterans, and even more memorably, with “The Wall,” a song that chronicles the fall of the Berlin wall in 1989 which had especially-emotional significance for Kay who, as a child, fled the Soviet Union with his mother.

There are also several songs employing surprisingly funky backgrounds such as “Rock Steady ” (no relation to Aretha Franklin’s), “Business Is Business,” and the previously mentioned “Compared to What.” Closing this disc is “For the Women in My Life,” Kay’s heartfelt tribute to his mother, his daughter, and his wife — from Kay’s solo album Heretics and Privateers which is well-worth seeking out separately from this jam-packed anthology.

The third disc, a slightly abridged version of the Live at 25 CD, is where you’ll find all of Steppenwolf’s greatest hits: “Hey Lawdy Mama,” “Magic Carpet Ride,” “Monster/Suicide/America, ” and so on. Hardly just a lineup of respectful reproductions, this live set is played in a no-holds-barred manner by Kay and his collaborators from the end of the millennium: keyboardist Michael Wilk, drummer Ron Hurst, and longtime guitarist Rochette. Throughout, Kay’s signature baritone growl is strong, suggesting that when it comes to blues, rock, and social justice, you only get better with age.