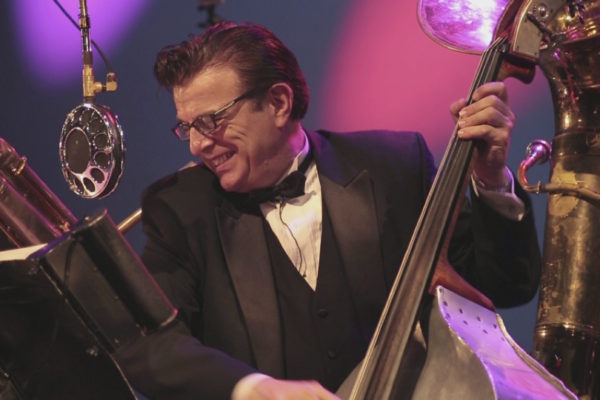 For many of us, the term “hot jazz” conjures tuneful, frenetic music of the 1920’s and 30’s that we’ve experienced mostly on crackly records of the time – or through the era’s strange, often-violent cartoons. We know those decades produced prodigious talents, from George Gershwin to Bix Beiderbecke to Louis Armstrong, to name only a few, but how often have we really heard that music, in its full power, as if we were there?

The new documentary, Vince Giordano: There’s a Future in the Past, brings us about as close as any of us will ever get. The eponymous Mr. Giordano has made preserving, cataloging and performing this music his life’s work. You may have seen him and his crackerjack band, The Nighthawks, on TV series like Boardwalk Empire and various Woody Allen films – or crisscrossing the country, time and again, to perform at local clubs, festivals and pretty much any gig they can scrounge.

Hearing them is a joyful treat. They bring life and richness to tunes heard mostly on those primitive records. Their attention to detail and musicianship are astounding. For his part, Vince covers the bass parts either on a mostly-metal upright bass, tuba or bass saxophone, being careful to choose the right one for each arrangement. He’s also a talented singer, crooning with easy authority.

Speaking of arrangements, Vince has gathering over 60,000 of them through decades of research, connections and estate sales. His Brooklyn home contains pile after pile of manuscripts.

In good times, bandleader Vince is able to send multiple combos out on a busy night. Those good times, however, seem mostly in the past. It looks like keeping it all together – paying the band and bills, and somehow making a living – is getting progressively more difficult. But Vince soldiers on, following his calling. Fortunately, he has gathered a loyal, often-young tribe that turns out for his shows in period dress and dancing shoes. So far, it’s enough to keep him going.

[amazon template=right aligned image&asin=B01FNRHA3O]Any working musician will recognize the tedium of life on the road, the load-outs, the meals on the run. They’ll also see why these guys keep doing it. When the band’s in full flight, the joy is undeniable. And, to a person, they appreciate that Vince has built something special and important.

The film, directed and produced by Dave Davidson and Amber Edwards, captures both the thrill of the music-making and the commitment it takes to do it properly. The net effect is uplifting – thanks to the irresistible music and irrepressible man behind it.

Vince Giordano is making the round of arthouse cinemas and will likely make its way to the wider market sooner than later. Put it on your watch list.

PS. You may also enjoy two films chronicling the lives of jazz greats Miles Davis and Chet Baker. Check them out in our posts “It Takes a Long Time To Be Able To Play Like Yourself” and The Tortured Life of a Legendary Jazz Artist.

4 comments on “Hot Jazz Is Alive and Well, Thanks to This Charming Obsessive”