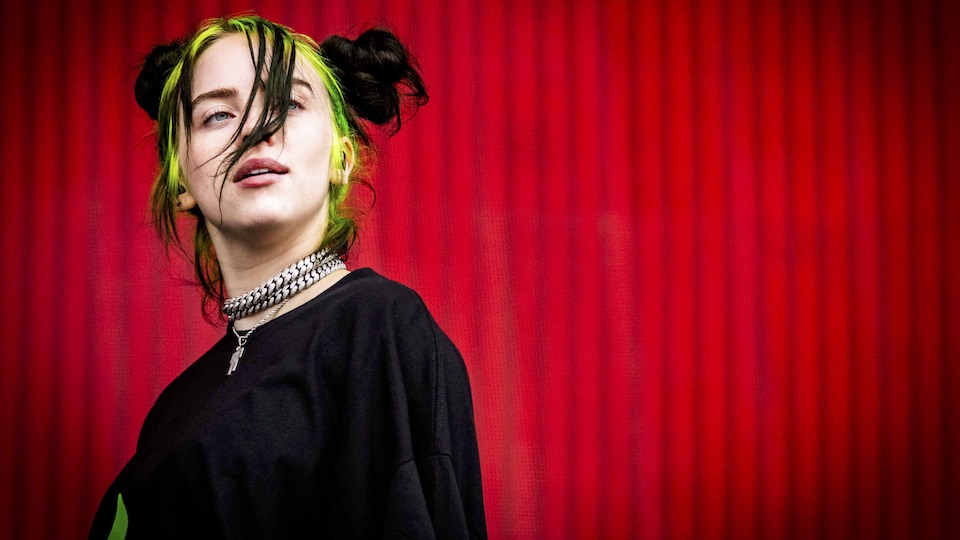 Anyone born after the year 2000 will know exactly who Billie Eilish is. For those who aren’t Gen-Z’ers, you might be wondering what this “Billie buzz” is all about. So here’s the deal.

At just 18-years-old, Billie Eilish is officially the world’s newest, biggest pop star. Within just two years the LA-born teen has skyrocketed to fame, accomplishing all, and then some, of the pre-requisites for modern-day stardom. Not only is she the first, and thus far only, artist born in the 2000s to have a #1 single in the USA, she’s also had her self-penned songs streamed more than a billion times, amassed over 15 million followers on Instagram, and has celebrity fans as diverse as Julia Roberts, Melissa McCarthy, Dave Grohl, and Tyler the Creator. Oh, and she’s also a proud vegan and outspoken eco-warrior. Not bad for someone who might very well be younger than some of your pairs of shoes.

In 2014, 14-year-old Billie uploaded her first song, “Ocean Eyes”, co-written and produced by her older brother Finneas, to the online music streaming platform Soundcloud. Overnight, the song went viral and soon the record companies came knocking. In spring 2017, her hit “Bored” featured on the hit Netflix series 13 Reasons Why and in the fall of that same year, Eilish released her critically acclaimed EP, Don’t Smile At Me. While this was Eilish’s big musical introduction to the world, it wasn’t until she dropped the singles “You Should See Me In A Crown” and the heartfelt “When The Party’s Over” in 2018 that she officially became a household name.

In March of this year, three years after her breakout song “Ocean Eyes” hit the digital soundwaves, Billie Eilish finally released her first album When We Fall Asleep, Where Do We Go? The album has already been certified double platinum and has been hailed as a triumph by critics and fans alike. Her song “Bad Guy” topped the Billboard Top 100, finally knocking off Lil Nas X’s hit “Old Town Road” from the top of the charts after an impressive 19 weeks.

Aside from her age, what makes Billie Eilish so special? Well, for one thing, she has single-handedly reinvented the musical landscape. Her songs are full of contradictions, at once broody (“When The Party’s Over”) and deeply satirical (“Wish You Were Gay”), mixing disparate soundscapes into a new genre of music, uniquely it’s own.

In interviews, she has spoken at length about her eclectic music taste growing up, enjoying everything from doo-wop to hip-hop, and everything in between. The respect and profound understanding of music Eilish has developed has translated itself into a blend of sounds that has redefined what today’s music can be. Pop, trap, jazz, and EDM all make their mark on her songs, held tenderly and confidently together by her wispy vocals and derisive delivery.

Eilish’s lyrical themes are dark and angsty, and it’s not hard to see why the younger generation has claimed her as their cultural spokesperson. While pop contemporaries might be singing of breakups and bad boys, Billie Eilish’s hits are filled with monsters, serial killers, and the greatest threat of all, our planet’s environmental crisis, all strung together with wobbly beats, creepy sound effects, and unsettling chord progressions.

The singer’s quasi-goth style and American Horror Story-esque music videos speak to a generation born into a war and had violence auto-playing their whole lives. Her music captures the zeitgeist of a generation who has lost patience with the selfishness and ambivalence of the older set. In 2019, bubble-gum pop just won’t cut it anymore.

As if her “genreless” music wasn’t enough to stir the emotions of a more tolerant, less label-oriented generation, Eilish’s androgynous style and fierce eco-consciousness has certainly earned her credit too. For her Where Do We Go? world tour, which began in April this year and is set to end in November, Billie Eilish partnered up with sustainability non-profit REVERB in order to make her concerts as eco-friendly as possible. Tapping into fellow Gen-Zer Greta Thunberg’s environmental activism, Eilish is encouraging her fans to use refillable bottles at her concerts, banning plastic straws, and setting up recycling bins throughout her gig grounds and venues.

Eilish has a F*** You attitude that few can pull off so endearingly. While some might accuse Billie of being precocious or “too young” to be as outspoken as she is, this is to discount the most important demographic our world has: the one who is fighting to save the world and striving to bring about political and environmental change.

While my own millennial generation will go down in history for being “lazy,” “entitled,” and “avocado-eating snowflakes”, it’s not without a little bitterness that I see Gen-Zers being hailed as the saviors of our “doomed planet”. While my fellow Gen-Yers were blindly stumbling through the money-hungry, smoke-fogged aftermath of the 80s and 90s, propped up by our “participation” and “good attendance” trophies, those born into the chaos of a post-9/11 landscape have only known survival. It’s understandable then that they are praised for trying to make the world a better place. They’ve inherited a mess and are now trying to fix it.

To listen to Billie Eilish is to hear the concerns and demands of a generation coming to the fore. Her middle-finger raising brashness might first seem like just another hell-raising teen acting out, but Eilish is a rebel with a cause. With an icon like this influencing the cultural landscape, you can trust the kids are alright.

2 comments on “Why Is Billie Eilish Such A Big Deal?”