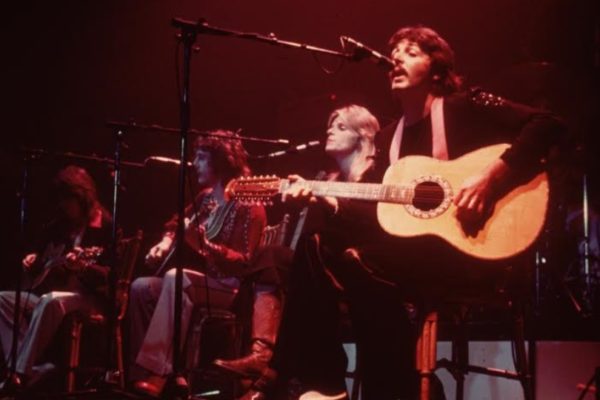 Back in high school, I had a little routine of playing “Winter Rose” (followed by Aerosmith’s “Seasons of Wither”) on the first snow day of every year. There was just something so special about hearing this short little tune while walking the street and seeing everything covered in white – it’s a song that’s both melancholic and hopeful and this kind of sums up my feelings about the season in general. What’s interesting is that within its album, “Winter Rose” is not even developed beyond one verse and a two-minute length, and it is paired with “Love Awake” in a medley-type fashion. It feels thrown there as just another little McCartney experiment in a series of many, and that is a constant characteristic of his solo work: often it’s all about the little moments. A chorus that’ll stick in your head, a melody that feels just so inventive, a mood that’ll resonate with you, an intriguing instrumental touch.

Two new members joined Paul, Linda and Denny Laine for this one last Wings album – Steve Holley on drums and Laurence Juber credited with guitars. Released in 1979, Back to the Egg is said to be the band’s response to the rise of the Punk and New Wave scenes, and indeed, there is some truth to that. Take for example a song like “Spin It On” – it is played at a breakneck speed, faster than anything they’d ever attempted before.

Or “Old Siam, Sir,” where they inject a certain dose of rawness and grittiness and come out with one of their most convincing rockers ever – the words may be completely meaningless, but those guitar breaks steal the show all by themselves. And “Arrow Through Me” definitely should’ve been a bigger hit, with that wonderful coat of current synths and echo added to an already memorable pop melody.

However, to label the whole album as strictly Punk or New Wave is to completely misjudge it. In typical Wings fashion, this is another eclectic bag of styles and forms, with unpredictability as the only constant. Perhaps another artist would’ve stretched the whole concept idea to more than just a couple of interludes, reprises and naming of album sides (Side A is named “Sunny Side Up” and Side B “Over Easy”). And another artist could’ve used having big names such as David Gilmour, Pete Townshend, John Bonham, and John Paul Jones in the studio to create something more relevant than a bunch of rocking jams (“Rockestra Theme” and “So Glad to See You Here”). And one could’ve fleshed out the gorgeous, gentle acoustic strumming of “We’re Open Tonight” and the passionate longing of “After the Ball” into fully developed songs. But once you realize that perfection over the course of an album was never really Wings’ goal, pretty much everything here will start making sense in a quirky, fun, charming way.

Few other albums of that time could so easily transition from a hard-hitting rocker to a full-on jazz number as the album does at its very end with the “So Glad to See You Here” – “Baby’s Request” sequence. Chaos becomes late-night smoothness and the finale seems just perfect for the Wings’ whole career. In two years the group would already be disbanded after the Japan tour disrupted by McCartney’s infamous drug bust, but not without leaving a fine 7-album legacy behind. Back to the Egg may not necessarily reach the heights of Band on the Run and Venus & Mars, but it is still an important part of that legacy and an album where every fan of McCartney’s solo work will find something to like.

PS. You may also enjoy our posts Paul McCartney’s “Ram” Reconsidered and “Give My Regards to Broad Street” Sure Has Aged Well.

11 comments on ““Back to the Egg”: A Perfect Finale for Paul McCartney & Wings”