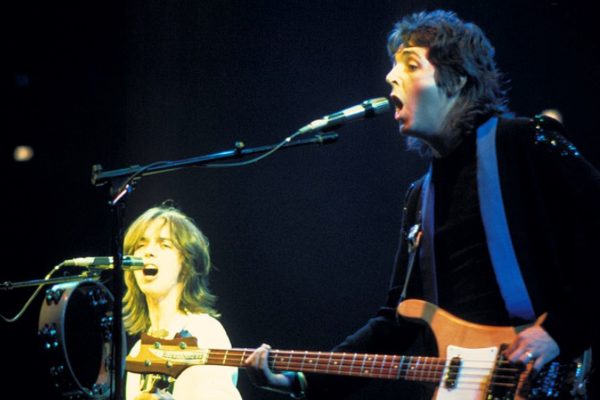 My sophomore year of high school, I decided to make a mockumentary about my experiences in marching band that fall. Somehow I convinced my good-natured band teacher, Mr. Moore, to let me film all kinds of footage during my down time and then show the finished film during class at the end of the semester. When I was looking for an opening credits song, my dad half-jokingly suggested the Paul McCartney & Wings song “Band on the Run” from their hit 1973 album of the same name. Though the song alludes to a band of criminals on the run, I liked the idea of interpreting it as an ode to marching band members running around a football field. I was hooked immediately by its dramatic yet playful structure. Twelve years and one music degree later, Band on the Run has become one my favorite albums, never failing to delight and surprise me with its ever-changing sound and occasionally kooky lyrics.

Wings was Paul and Linda McCartney’s pet project from 1971-1981 with a revolving door of members save for former Moody Blues guitarist Denny Laine. After struggling to impress critics and die-hard Beatles fans with their first two albums, Wings finally had a hit with “Live and Let Die,” for the 1973 James Bond film of the same name, earning a Best Original Song Oscar nomination. They followed up with what would be their most successful album, Band on the Run, a loosely threaded collection of songs (mainly recorded in Lagos, Nigeria) about freedom, ambition, love, and escape; ideas not unfamiliar to McCartney, who longed to be free from comparisons to both his earlier work and the critically acclaimed solo work of his former band-mates. Not to get too punny, but Band on the Run helped Paul McCartney finally spread his wings and establish a musical identity separate from The Beatles.

From the get-go, Band on the Run is a rollicking experiment in various styles and sounds. The opening track, the 5-minute+ “Band on the Run,” sets the tone by offering up three distinctly different sections: slow ballad, mid-tempo funk, and an up-tempo country-rock hybrid with a bombastic horn transition section (reminiscent of the one featured in “Live and Let Die”) thrown in for maximum effect. It shouldn’t really work, but somehow it winds up being an epic escape anthem worthy of a stadium of fans and certainly a predecessor to the theatricality of Queen’s 1975 mega-hit “Bohemian Rhapsody” (both songs even reference “mama” in their ballad sections!). The chorus of “Band on the Run” bookends the album, showing back up at the end of the similarly horn-laden dramatic last track “Nineteen Hundred and Eighty-Five,” giving an otherwise somewhat anarchic album a hint of a through-line.

It’s a tactic McCartney also uses on the second to last track, “Picasso’s Last Words (Drink to Me),” which changes tempos and styles, threading in the choruses of both “Jet” and “Mrs. Vandebilt” almost like a film composer using leitmotifs (recurring musical themes) to re-introduce characters in a score. “Picasso’s Last Words (Drink to Me)” is the longest and most musically scattered track on the album, and according to McCartney, this is meant to reflect Pablo Picasso’s own artistic experimentation through mixing different moods and styles. However, McCartney anchors his own musical experiment by using these two previously heard song snippets, which cut through the self-described “muddle” and connect back to the rest of the album.

And the rest of the album is a mix of catchy melodies (“Mamunia”), melancholic ballads (“Bluebird” and “No Words”), stoner-friendly slow-jams (“Let Me Roll It,” which sounds like McCartney doing an imitation of former band-mate John Lennon), and road-trip ready rock (the bouncy “Helen Wheels”). The lyrics don’t always make sense, but the overall effect of the album is sheer sonic pleasure from dramatic start to finish, thanks in large part to added orchestral arrangements by longtime David Bowie collaborator, Tony Visconti.

As a high school marching band nerd, I was initially drawn to the album solely because of these huge orchestral sections much in the same way “Live and Let Die” has remained one of my favorite Bond film songs. I loved how important and urgent the music felt and how classical instruments could still produce a “rock ‘n roll” sound. It’s hard not to get swept up in the bombastic feel of Band on the Run. Even as an adult, my heart still thrillingly races when I get to the end of “Nineteen Hundred and Eighty-Five” with its blazing crescendoing brass line.

And it seems I’m not the only young adult to take delight in Paul McCartney & Wings’ best work. DJs/music producers Timo Maas and James Teej were nominated for a 2017 Grammy Award for their remix of “Nineteen Hundred and Eighty-Five,” re-imagining the track for the indie hipster club kid set. The stripped-down track retains Paul McCartney’s searing vocal and bassline groove with Maas and Teej adding a thumping drumbeat and a few atmospheric electronic effects to make the track their own. It’s a musical experiment of which Paul McCartney & Wings would surely approve, and somewhere out there, another sixteen year-old may just be discovering the same sonic pleasures I once did.

PS. If you like Band on the Run, you may also like our look at Ram, another Paul McCartney gem. Plus, check out our posts on Joni Mitchell’s Hejira and Steely Dan’s Aja.