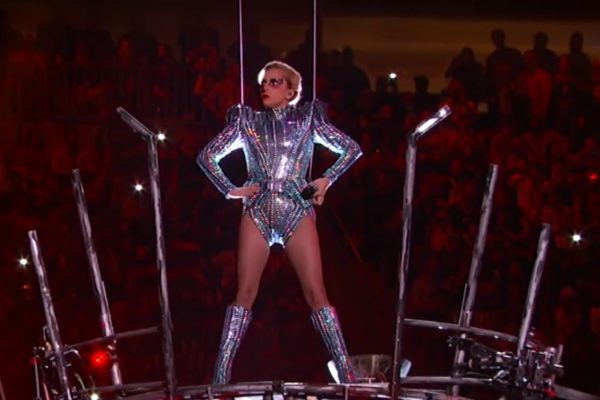 Whether you’re a diehard football fan or you only show up because Karen’s hosting and she makes the best Buffalo Chicken Dip, the Super Bowl halftime show is a big deal. It’s your chance to enjoy a little music between commercials, relax from the intensity of the game, explain to your grandmother who today’s current pop stars are, and of course refill your plate of dip. Since the first Super Bowl in 1967, there have always been halftime shows, but after Ella Fitzgerald in the ’70s, and Chubby Checker in the ‘80s, superstar performers became the rule. Like the NFL itself, things have only gotten bigger, flashier, and more expensive. Lady Gaga’s Super Bowl 51 show was no exception. Did she make this 100% correct, not at all subjective list of the top 10 halftime performances of all time? Trust.

Remember how Jessica Simpson opened this show? Nope, didn’t think so. If you couldn’t guess by the crowded and eclectic lineup, this wasn’t that good of a show. But the nip slip (a.k.a. wardrobe malfunction) seen round the world was so incredibly infamous that it HAS to make the list. Unsuccessfully hunting for nip-slip footage inspired Jawed Karim to create YouTube. Historic.

The Boss knows his business. He just played the hits — in a 14-minute long power-thon of classic rock — and gave the people what they wanted. Plus, who can forget the full on crotch-slide into camera? Bruce is keeping it youthful.

*This spot could have easily been held by Tom Petty (2008) or The Rolling Stones (2006) who also showed up all flash but no frills to blast out their own greatest hits lists.

[amazon template=right aligned image&asin=B00000K1I1]Ms. Ross, America’s original Diva, banged out a ten song medley saluting The Supremes (“Stop In The Name Of Love”), her solo career (“Chain Reaction”) and disco (“I Will Survive”) in a breathtaking 12 minutes while managing four wardrobe changes. Did I mention the woman was 52 at the time?! Then she exited the field in a helicopter. A HELICOPTER. The show may as well have been titled “You’re Welcome. With Love, Diana.”

The joy and wonder of the internet discovering #LeftShark may as well be a snapshot for how innocent we were just two years ago. Plus, Missy resurfaced with a vengeance, Lenny Kravitz melted a bunch of faces, and Katy totally killed it on that giant animatronic tiger. (You forgot she had so many hits, didn’t you?) And Left Shark. #NeverForget

Don’t let the long list of performers fool you. This was Madonna’s show. Anything Katy Perry learned, she learned from the Queen of Pop. It’s 2012, Madge is 54, and after almost 30 years in the game she puts on a CLINIC in being entertaining, relevant, and inventive AF. She’s Cleopatra, she’s a cheerleader, M.I.A. flips off the crowd, Nicki is Nicki, Cee-Lo hits the highs, and through it all, Madonna reigns supreme.

Bono, Edge and company only played three songs — and refrained from the easy win of “Sunday, Bloody Sunday” — and truly we hardly remember the music. The names of victims scrolling behind them and Bono ripping open his jacket to reveal an American flag lining will still give you goosebumps. Sometimes less is more.

It was a beginning, and it was an ending. In 1993 the King of Pop basically invented the modern-day Super Bowl halftime show. Every show that comes after will forever be compared to Jackson just STANDING onstage for 90 seconds holding the audience in the palm of his hand without so much as moving a surgically adjusted eyelash. Talk about baller. Yet this was also really the last huge moment before MJ’s world seemed to self-implode.

[amazon template=right aligned image&asin=B01MDP1PZY]Why does Prince get the #3 spot over Michael? Two reasons. One, we’re now in the age of the internet, so the *ahem* iconic image of his “guitar silhouette” will forever live in infamy. And two, he plays the guitar like he invented it. Did we mention the whole thing took place in a Floridian monsoon? Talk about seat drenching!

Does anyone have bigger cajones than Gaga? No. She is a show-woman of the most elite and eccentric caliber. Show checklist: Start on the roof; involve hundreds of color-coordinated drones; sing “This Land Is Your Land” as a nod to our strong belief in one another; descend on wires; belt “Born This Way” in all it’s inclusive glory; nail choreo with a fleet of white glitter-tassle football zombies; spike the mic, catch a football, vanish from sight. One last thing: HER MIC WAS LIVE THE WHOLE TIME. No canned track for The Lady. That’s pipes. And guts.

Need I say more? I needn’t. So I shan’t. Except that Destiny’s Child reunited for this one shining moment and Jay-Z wasn’t even considered and no one cared. It was more than enough. It was delicious. It was so epic that when the power crashed in NOLA people genuinely assumed it was because Bey killed it. They weren’t “ready for this jelly” indeed.

PS. You may also enjoy our post More Than Passing Fancy: 10 Transcendent Moments in Sports. Plus, it’s never too early to start thinking about fantasy football for next season. Our post will get you ready for the 5 stages of Fantasy Football Grief.

0 comments on “Who Gave the Best Super Bowl Halftime Show Ever?”