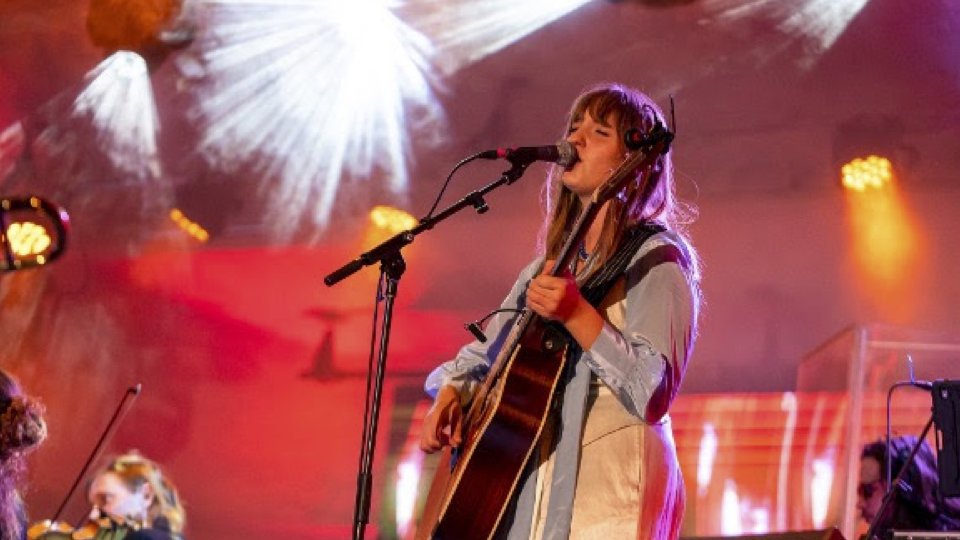 Don’t buy into the widely perpetuated notion that the album as we know it is an endangered species. As long as there are human triumphs and tragedies, great or small, there will be stories to be sung. The best musical medium for storytelling is the album, and the most efficient messenger is the singer/songwriter. Over the course of 2022, troubadours of all stripes had made those facts achingly clear. The legendary and the unknown, the veterans and the upstarts, the whisperers and the wailers—in the past year, some of the most gifted singer/songwriters around have made a whole heap of riveting recordings. And if you haven’t been keeping close tabs, chances are there’s some you might have missed. Don’t sweat it. Here’s your chance to play catch-up.

She was only 22 when she broke through with 2019’s Who Are You Now, but Madison Cunningham is an old soul. And her follow-up only emphasizes that fact further. With her sophisticated harmonic and rhythmic artillery, Cunningham makes one wonder what might have happened if David Crosby had been a sperm donor for Fiona Apple instead of Melissa Etheridge.

Lincoln Barr first turned heads as frontman for the classy Seattle power-pop band Red Jacket Mine, but the jazzy balladry and lyrical intensity of his 2017 solo debut, Trembling Frames, marked a drastic detour. For his second solo outing, Barr expands that template, with elegant orchestrations and lush-but-intimate production, existing in an alternate reality where Elvis Costello and Burt Bacharach had somehow fused into a single entity instead of merely collaborating back in the ‘90s.

On his previous couple of albums, New York’s Pete Mancini established himself as a tough-minded Americana/country-rock troubadour. Produced by Drive-By Truckers bassist Matt Patton, Killing the Old Ways shows Mancini’s continued knack for mixing the personal and the political, but it also creates an environment where his earthy songwriting is elevated to the next sonic level, occasionally leaning a little more rock ‘n’ roll along the way.

In the first half of the year, Django Haskins released a brace of five-song EPs that might as well be considered together as a full-length album. The North Carolinian’s blend of offbeat alt-pop and lyrical folk-rock is invested with enough mastery that he can tweak conventional song structures at will and end up with something simultaneously playful and poignant.

If you think the bone-deep irony and witheringly sardonic worldview of Randy Newman and the engaging, Mr. Rogers-rocks-out earnestness of Jonathan Richman have no common ground, you haven’t heard Noam Weinstein. And with a divorce in his rearview mirror on Undivorceable, the Boston-based songsmith has more emotional grist for his mill than ever.

If Bart Davenport’s mix of ‘60s pop melodies and alt-acoustic cool brings to mind hip Brits like Lloyd Cole and Robyn Hitchcock, it’s probably because they’re all drawing their influences from similar wells. On Episodes, Davenport’s tunes go deep but maintain a light touch that keeps you engaged all the way through.

Considering that Caleb Nichols’ website is CalebNicholsIs.Gay, it shouldn’t come as much of a surprise that he describes Ramon as a “queer opera.” But it’s also a love letter to The Beatles, overflowing with musical and lyrical references to the Fab Four. It’s the kind of ballsy endeavor you expect from someone who’s unafraid to rhyme “Doritos” with “Jared Leto.” It’s also a continuously commanding indie-pop workout, with perhaps a dash of Elliott Smith influence residing among the Liverpool-informed licks.

Simon Joyner has spent so many years turning out strikingly poetic indie-folk albums from his Omaha HQ that it would be an event if he didn’t have a new head-turning batch of tunes out this year. Songs From a Stolen Guitar does not alter that tradition. But Joyner’s delivery is so unassuming and the arrangements so homegrown that the songs might manage to slip all the way inside you before you even start to realize they’ve quietly realigned your thought processes.

In the ‘80s, Pete Astor was the voice of British indie cult heroes The Loft and then The Weather Prophets. But he’s been trotting out sure-footed solo records since 1990. His latest is full of quiet observations that aren’t a million miles from the more reflective side of his ‘80s output, with the occasional soupcon of new wave signifiers to remind us that Astor has more strings to his bow than the laid-back strum-and-croon approach.

If Another Green World-era Brian Eno, Kate Bush, and Robin Holcomb had a three-car pile-up on a New York roadway, it would be possible to imagine the spirit of Carol Lipnik floating away as the accident’s lone survivor. But the secret the NYC avant-cabaret scene has loosely kept for years is that Lipnik also commands a superhuman vocal capability that she exercises with the utmost artistry and a zero-tolerance policy towards unnecessary flash.

Loudon Wainwright III is nothing if not smart. Over the last 50-plus years of record-making, he’s ascertained that a stripped-down setting is ideal for his humor-filled observations of the human condition. The album he unveiled at age 75 plays to his strengths, often relies on little more than acoustic guitar and sometimes simply a cappella voice as he casts a wry eye and a wicked grin at aging, isolation, and more.

Power pop, psychedelia, baroque rock, sunshine pop — Richard X. Heyman has absorbed them all into his bloodstream so completely that every time he opens his mouth a piece of classic-sounding pop rock emerges. Well, at least that’s the way it seems. And between the twinkling keyboards, tintinnabulating guitars, and honeyed harmonies that coat his latest collection of timeless tunes, it’s a tough notion to disprove.

What if you could “Frankenstein” the most appealing features of your favorite songwriters together into one mighty Uber-troubadour? For instance, the warmth and humanity of Jackson Browne, the melodic grace of Paul Simon, and the easy-rolling Americana of John Hiatt? And what if you brought multi-instrumentalist and former Bob Dylan bandmate Larry Campbell in to play on and produce your idealized auteur’s album? The idea that it might sound something like this is not the craziest one ever floated.

L.A. songwriter Ward White’s latest album makes you hope for his sake that his process is more about fabulizing than documenting. Because the situations in which his song’s narrators find themselves seem like a worrisome and exhausting way to live a life. Whether dangerous, disturbed, seedy, or just plain sad, White’s characters each sound like they could easily carry their own Hunter (or Jim) Thompson novel. The elegant art-rock arrangements surrounding them make all their stories easy on the ear no matter how dark the details.

When postmodernist Lee Feldman decided to write a pop/rock musical, he removed conventions like linearity and narrative arc, letting the fragments of his story float freely into your ears and allowing you to make your own connections between them. Part science fiction tale, part quirky comedy, part conceptual art, Dr. Future is full of engaging characters, inviting melodies, and glimpses of alternate realities. It’s a “write your own adventure” story with an irresistible soundtrack provided.