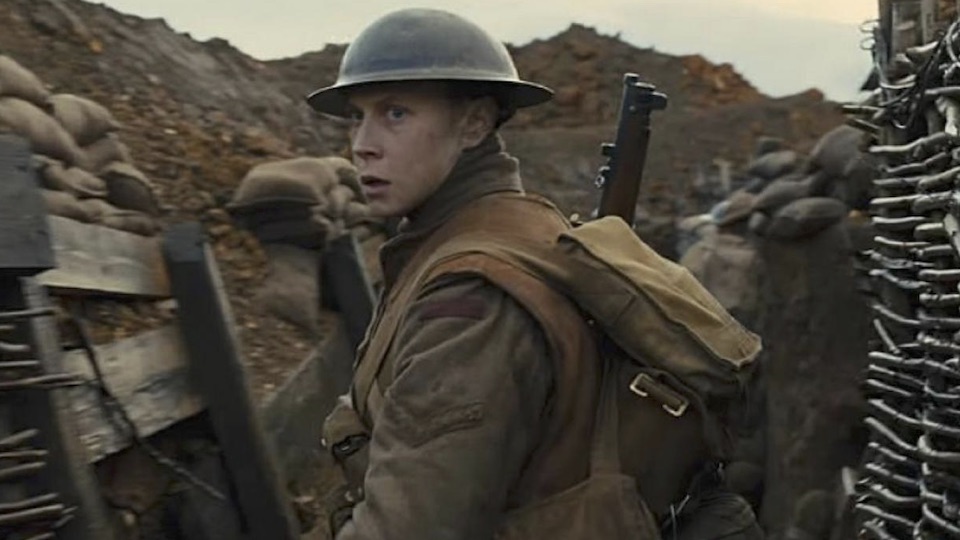 It would seem congratulations are in order for Sam Mendes, recipient of the Golden Globe for Best Director and Knight appointee to the British Empire. His newest feature, 1917, might be his finest yet, an uncompromising, visceral journey back to the first World War.

Cinema is packed with WWII epics, yet the “War To End All Wars” seems strangely under-served. Is it the morally dubious nature of the war? Is it that the events resolved long before modern memory serves us? Was it the niche collective of soldier, rather than civilian, targets that made it intangible?

WWI was remembered with reverence — then irreverence in the comedic Blackadder Goes Forth, starring Rowan Atkinson. Though satirical, this BBC TV series still brings tears during the haunting finale. It was a breakthrough for a comedy to be so thoughtful. Here are seven more films that capture the horrors of the Great War in their own unique ways. If 1917 is on your must-see list, add these as well.

Director William A. Wellman was hired both for his vision and his expertise as a former combat pilot. Bringing his memories of the cruel war to screen, Wellman pictures silhouettes of airplanes flying headfirst into the fiery grounds. If the flight scenes seem real, it’s because they are. Actors Richard Arlen and Charles “Buddy” Rogers were filmed in close-up flight positions, Arlen bringing his war experience into the film. Considered lost for decades, this silent treasure was happily restored when a print was found in 1992 through the Cinémathèque Française.

Based on Erich Maria Remarque´s landmark novel, Lewis Milestone’s elegy stands with an impressive 100% critical rating on Rotten Tomatoes. Lew Ayres leads the impressive cast list, an ensemble of performances detailing the harrowing stains blood-fuelled war leaves on us. Although an American production, the film stays true to the book’s German geography. A monumental critical success from the moment it was released, the film was pointlessly remade as a made-for-TV movie in 1979.

One of Stanley Kubrick’s earliest triumphs, his first collaboration with Kirk Douglas found the pair digging into the deep, dark terrains of Trench Warfare. Douglas is excellent, fully committed to the performance of an officer, surrounded by the idiocy of both his orders and his habitat. It’s an anti-war effort, one Kubrick would return to with Full Metal Jacket (1987), a probing, punishing look at the Vietnam effort.

Released the same year as Mad Max: The Road Warrior, Mel Gibson starred in an Australian biopic that commemorated the bravery of the young Australian soldier. “Gallipoli was the birth of a nation” Gibson recalled. “It was the shattering of a dream for Australia. They had banded together to fight the Hun and died by the thousands in a dirty little trench war.” The film also stars Mark Lee as the dewy-eyed Archy Hamilton. Lee’s charm, gaiety and indomitable innocence work wonders, making the final shot that bit more unbearable to swallow.

Christmas brings out the best in many of us. During a 1914 Christmas truce, soldiers put down their weapons for seasonal chit-chat across the trenches. Working as a cutaway between French, German and Scottish soldiers, Christian Carion asks himself why these men found themselves more friend than foe in a war each wanted to end painfully. Diane Kruger stars as Anna Sørensen, a sensible voice of reason in a toxic, masculine war. Christmas films traditionally feel light-weight; this makes for more substantial viewing.

While soldiers tended to their wounds on the fields, their wives had to face their wounds in silence. Alicia Vikander stars as the real-life Vera Brittain, a precocious student who abandoned her Oxford studies to become a nurse. The film shows the many men (including Brittain’s brother Edward and her betrothed, Roland Leighton) whose deaths she learns of through letters and word of mouth. Through writing the book, Brittain found catharsis and peace; through her acting, Vikander pays due diligence to one of the greatest British war writers.

Related: “‘They Shall Not Grow Old’: War As You’ve Never Seen It”

Peter Jackson’s first documentary and the result might be his strongest work since The Two Towers. Piecing together six hundred hours of interviews, Jackson put together a memento of the men’s experiences of trench life. It’s gorgeously edited, an impressive collection of past experiences. Discussing the work at the premiere, Jackson modestly attributed “This is not a story of the First World War, it is not a historical story, it may not even be entirely accurate but it’s the memories of the men who fought – they’re just giving their impressions of what it was like to be a soldier.” The world took notice, critical acclaim was heaped at the New Zealander’s feet. He’s keeping his documentary chops sharp as he works on the impending Let It Be re-release.