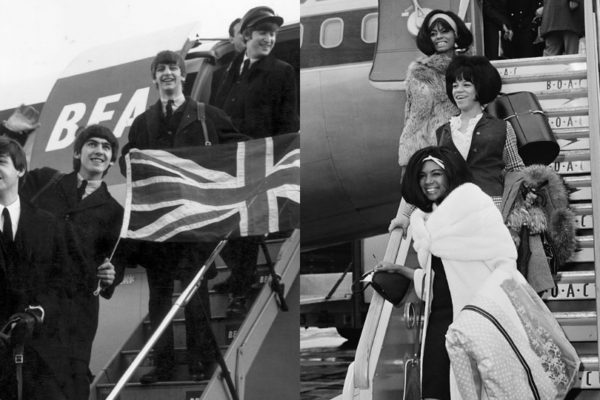 In music, just like everywhere else, if you slice data thin enough, you can get some pretty interesting results. Take a look at Exhibit A below for instance. This chart shows that for one year at least, the Supremes defied preconceptions by featuring more guitar in their number one hits than The Beatles did. Behold 1968! Obviously, an explanation is in order… After all, how on earth can this be? The Supremes were a vocal group! The Beatles were so much more. Indeed they were — but let’s dig deeper. (Something I’ve done repeatedly through my Number One with an AXE! ebook series which focuses on guitar work in America’s number one hits.)

On one hand we have The Beatles who famously wrote and played their own songs, and featured two good-to-great guitarists in George Harrison and John Lennon. (Not to mention Paul McCartney, but let’s not drift). Across the pond at Motown Records, The Supremes — singers Diana Ross, Mary Wilson and Florence Ballard — were backed by a stable of Detroit-based studio musicians known as the Funk Brothers, whose alumni include guitarists Dennis Coffey, Ray Parker Jr. and several others. Both groups used guitars in their number one hits. But, as the chart shows, their guitar trajectories are quite different. Here now is a year-by-year comparison of guitar usage by the two biggest pop music groups of the ‘60s. Each song is followed by a guitar score that evaluates riffage, rhythm playing, fills and solos. (Overall possible minimum score: 0; Overall possible maximum score: 40).

1964: Fab Four Domination
The Beatles come out with axes blazing while The Supremes use just a tad for some rhythm.

1965: More of the Same
It must be said, though: if this were a tenor sax comparison, The Supremes would be slaying!

1967: The Gap Approaches Zero!
Both groups use a bit less guitar, and it’s practically a tie.

1968: The Supremes Surge Ahead!
Each group had only one number one hit this year. The old sports adage comes to mind: “On any given day, any team can beat any other team.” Or something like that.

1969: The Beatles “Get Back” in the Lead
The Beatles roar back with a double-sided number one release, but they need the points because the Supremes put forth their strongest guitar effort yet.

In 1970, The Beatles would have two more number one hits: “Let It Be” and “The Long and Winding Road,” and then break up. As for The Supremes, they would never hit number one again. Diana Ross went solo in January 1970, and the group continued with changing personnel until 1977, when they disbanded. “Someday We’ll Be Together” was the final number one hit of both the band and the ‘60s. Guitar-wise, there are two heartening takeaways from the number one hits of these two iconic groups: Motown and the Supremes slowly but surely embraced the guitar as the ‘60s progressed, and The Beatles returned to their guitar roots at decade’s end.

Be sure to watch for my next article: “Why Herman’s Hermits were Vastly Superior to Zeppelin.” (Kidding!)

PS. Check out our interview with Michael Rays to learn more about his excellent series of e-books Number One with an Axe or read his piece on the Great Guitar Drought of 1960-1963.

1 comment on “1968: The Year The Supremes Out-Guitared The Beatles”