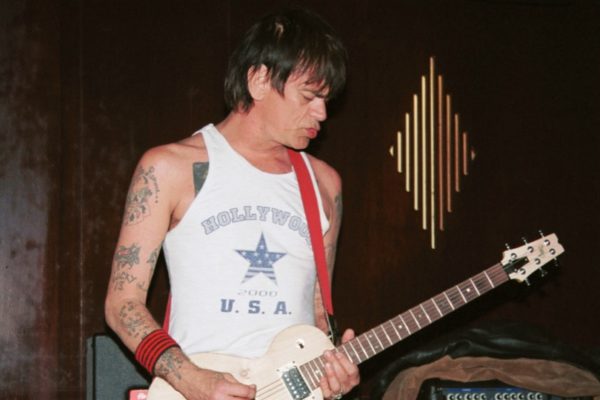 He wrote endlessly and effectively about loneliness and drug addiction and love and miracles and even his cat. He wrote about politics, male prostitution, UFOs, and mental illness. He even wrote about warthogs and weasels and Nazis. His canon is vast. Even Shakespeare has gotta be thinking “WTF!” now that the two have crossed paths in heaven because sadly, for us, Dee Dee Ramone died of a drug overdose on June 5, 2002. Outside of a mural painted under an overpass in Queens, there aren’t any major posthumous honors being accorded to this songwriting superstar, but that’s ok. His legacy is his discography. And here are some of his best.

1. “53rd & 3rd” from Ramones (1976)
This song concerns a Vietnam veteran who’s become a male prostitute who kills his john to show that he’s not gay. In just eight short lines and a chorus, Dee Dee has fashioned a powerful anti-war song on par with anything Bertolt Brecht wrote. This is Epic Theater, Ramones style!

2. “Today Your Love, Tomorrow the World” from Ramones (1976)
The Ramones really expected that some day they’d be as big as The Beatles (or at least The Bay City Rollers). With this kick-ass song off their debut album, they point their guitars in just that direction. But a song based on a 1940s B-movie propaganda film for the Hitler Youth didn’t quite help them cross over as expected. Well, it should have!

3. “Commando” from Leave Home (1977)
Who else would think to rhyme “be nice to mommy” with “don’t talk to commies“ and “eat kosher salamis?”

4. “Rockaway Beach” from Rocket to Russia (1977)
A perfect pop masterpiece with the greatest opening line ever (“chewing out a rhythm on my bubblegum / the sun is out and I want some”). It also happens to be their biggest hit, despite only reaching number 66 on Billboard‘s Hot 100.

5. “Teenage Lobotomy” from Rocket to Russia (1977)
With lyrics like “slugs and snails are after me” and “now I gotta tell them that I got no cerebellum,” this fan-favorite pays homage to great schlock films like Son of Blob and I Was a Teenage Werewolf and is as fun and funny as an afternoon at a drive-in movie theater.

6. “Chinese Rock” from End of the Century (1980)
Dee Dee himself said, “I wanted to write a greater song than ‘Heroin’.” Whether he surpassed the Velvet Underground is a matter of personal opinion but the great live version of this tune at the 1982 US Festival makes for a persuasive argument. There’s also a great version of this on the Johnny Thunders and The Heartbreaker album L.A.M.F.

7. “All’s Quiet on the Eastern Front” from Pleasant Dreams (1981)
My favorite song off this album is a wonderfully poetic after-hours tour of New York City. “Stalking the streets till the break of day / New York beauty takes my breath away.”

8. “Outsider” from Subterranean Jungle (1983)
Songs about being on the “outside” abound in pop music but this one takes it much deeper as the narrator positions himself on the outside of everything: “(I’m) all messed up, hey everyone, I’ve already had all my fun, more troubles are gonna come.”

9. “Psychotherapy” from Subterranean Jungle (1983)
You could easily argue that this one constitutes the gutsiest single ever released by a major label artist. Please check out the original video banned by MTV and directed by the guy responsible for “(I’m on a) Mexican Radio.” Lyrics about a teenage dope fiend who’s going to burglarize your home (among other things) are some of Dee Dee’s darkest ever.

10. “Wart Hog” from Too Tough to Die (1984)
Written in rehab after his counselor suggested composing a song about his real feelings, this is not what the counselor expected. Plus, Dee Dee’s amazing vocal performance just takes it to a whole other level.

11. “Eat That Rat” from Animal Boy (1986)
This visionary speed punk anthem about corporate greed and crooked politicians tells us “to get it together for our children’s sake.” Currently, “Eat the Rat” reads like a document about life in the world today. Truly insane.

12. “Crummy Stuff” from Animal Boy (1986)
I read once that Dee Dee said a great rock song should have only three words and a chorus. This one comes close. A song about hating mediocrity — pretty much The Ramones mission statement — deserves an A+ for being pure fun.

13. “Baby Doll” from Standing in the Spotlight (1989)
This beautiful love song written for Dee Dee’s first wife is so personal and vulnerable that when he first played it for her, according to his autobiography Poison Heart (a must read by the way), they both cried.

14. “The Crusher” from Standing in the Spotlight (1989)
This one first appeared on a solo release of Dee Dee’s although it also appears on the final Ramones album Adios Amigos with slightly altered lyrics and a really great vocal by Dee Dee’s stand-in CJ. You can easily see why they revisited it. It’s that good.

15. “Poison Heart” from Mondo Bizarro (1992)
Dee Dee’s music pops up in a few horror flicks like “The Blitzkreig Bop” in Fear No Evil and “Now I Wanna Sniff Some Glue” in Night of 1,000 Corpses but the best of that bunch is easily this one featured in Stephen King’s Pet Sematary II.

16. “Bad Horoscope” from Zonked! (1997)
Though it’s on one of Dee Dee’s solo albums, there’s actually a memorable performance from guest vocalist Lux Interior from The Cramps. Hell, The Cramps and all other punk bands owe their very existences to The Ramones for paving the way. Here Lux Interior pays back the debt by lending an excellent lead vocal to this already excellent rocker.

PS. Check out these posts on other great songwriters: Dennis Wilson in 10 Songs, 6 Songs That Embody Harry Nilsson’s Enduring Appeal, and The Best 10 Songs by Jackson Browne That You May Have Never Heard.