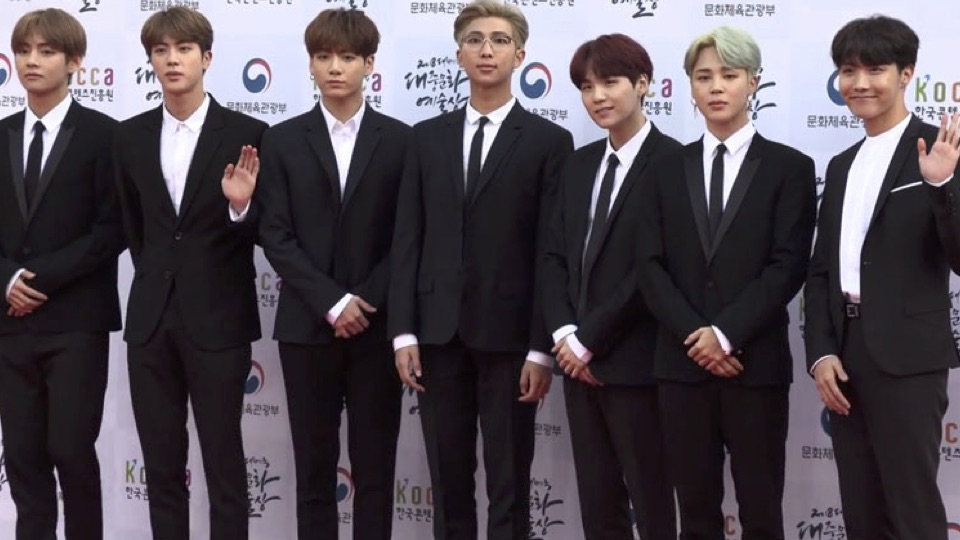 The internationally-renowned K-pop group, BTS, recently tied the Beatles’ record by earning three Billboard No. 1 albums in a year with their latest EP, Map of the Soul: Persona. They are the first band since the Beatles to accomplish this feat, jumpstarting the already present comparisons between the two groups.

Related: “When the Beatles Moshed It Up with The Stones”

Back in October 2018, BBC referenced BTS as “The Beatles for the 21st Century.” After tying the Beatles’ Billboard record in 2019, BTS appeared on The Late Show with Stephen Colbert in homage to the Beatles. Echoing when the Beatles made their U.S. TV debut in the Ed Sullivan Theater, BTS performed their hit single “Boy With Luv.” In the black-and-white tribute, Stephen Colbert appeared as Ed Sullivan and introduced the “Fab Seven,” and the stage mimicked the backdrop from the Beatles’ iconic TV debut. During the performance, the camera panned out to the audience to show “BTS Mania,” a play on Beatlemania.

There have been countless talented artists and groups over the years, but BTS has become a cultural phenomenon. Similar to the “British Invasion” of the 1960s, BTS influences the music industry, fashion, tourism, and the economy in South Korea and abroad. Their concerts and the clothes they wear sell out within minutes, and each year they bring billions of dollars to the South Korean economy. They are the first K-pop group to win a Billboard Music Award, present at and be nominated for a Grammy, sell out stadium shows in the U.S., and they were also named one of Time’s most influential people of 2019. Just like the Beatles, they represent more than music while simultaneously breaking new ground in the music industry.

Even though BTS falls under the genre of K-pop, the group incorporates pop, EDM, hip-hop, pop-rock, and R&B on each album. The group of seven features a rap line made up of RM, Suga, and J-Hope, and the other four members, Jimin, V, Jungkook, and Jin, make up the group’s vocal line. Instead of playing instruments on stage, the group dances in tightly synchronized and difficult routines, making their live performances popular.

For BTS, the road to success has been an uphill battle. They debuted in South Korea in an oversaturated market while belonging to a small company, Big Hit Entertainment. This gave them the opportunity to work as equal partners with each other and their production team when creating music, but by not belonging to a “Big 3” company (JYP Entertainment, YG Entertainment, and SM Entertainment) BTS lacked connections and was cut out of broadcasts in favor of other K-pop groups.

To this day, they still face xenophobia when they sell out world tours and are nominated at award shows outside of South Korea. Some critics and talk show hosts act shocked that BTS is successful even though they are Korean; as if their race negates the fact the members are all highly-skilled singers, rappers, dancers, composers, and producers. The group has no plans to break away from their roots and record an all-English song, and according to BTS their sincerity behind the music they make is what has helped them reach a global audience.

“We promised two things: We have to talk about what’s inside us, and we want to be helpful to the world,” Suga said. “All around the world, people face these struggles. That’s why we sing these songs.”

BTS songs are known for focusing on social commentary, mental health, learning to love oneself, loss, and individualism. The concepts behind their albums often reference literature, philosophy, and psychology. The group has also developed a reputation for taking a stand against social injustices with their music and in real life. In 2017, they launched an anti-violence campaign with UNICEF and they frequently donate their earnings to charities at the risk of backlash. Most notably, the group donated funds to the Sewol Ferry Disaster 416 Family Council despite a government blacklist of artists who supported those affected by the Sewol Ferry disaster.

One of the stops on BTS’ Love Yourself: Speak Yourself Tour was Wembley Stadium in London. Tickets sold out within 90 minutes, making BTS the first Korean act to perform sold-out shows at the stadium. During a press conference before their first performance, the group was asked about being compared to the Beatles.

“Many people are calling us the ‘21st century Beatles,’ and it’s a huge honor as well as a burden… but I hope that we BTS will make a mark as the 21st century BTS,” said RM. “I think that any popular boy band or group has always been mentioned with the Beatles in the history of music. Above all else, the Beatles were revolutionary to the point that it wouldn’t be an overstatement to say that all of the artists making music in 2019 are below the Beatles’ music… So just the fact that people are saying that makes me think that we’re doing a good job. It’s undeserved honor to even be compared to them when they’ve created a revolution in music and impact artists today.”

Related: “Everything Fab Four: ‘Ladies and Gentlemen, The Beatles!'”

The members of BTS recognize the monumental impact the Beatles left, and they know that artistically no present-day group has come close to making music like the Beatles. However, BTS should be acknowledged for their own revolution. They have overcome their own hardships to achieve mainstream success, altering the music industry and becoming a cultural phenomenon in the process. Their artistry resonates deeply with the modern age, and they provide hope to their fans by exploring controversial topics through music. They are paving their own way, and they should be hailed as the 21st Century BTS.