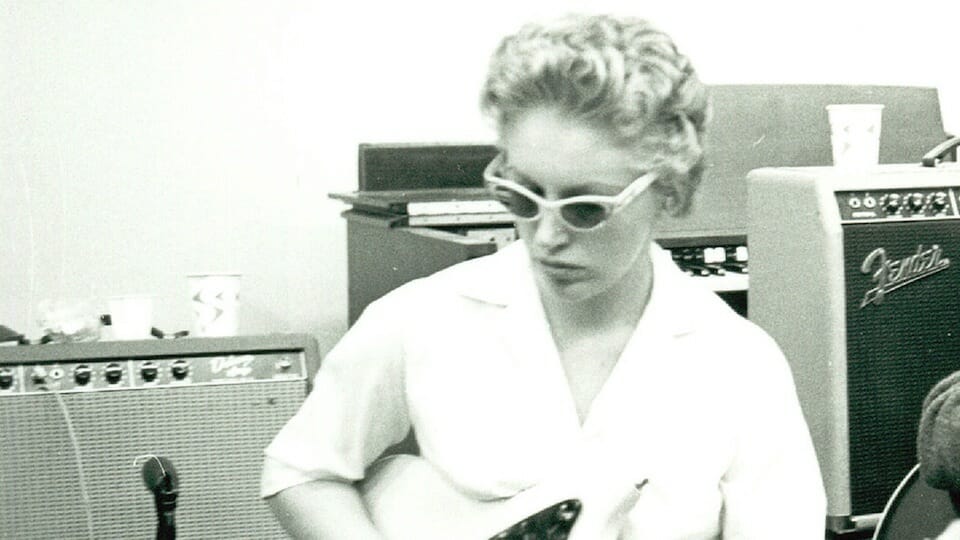 The Fender “Precision Bass” Guitar first appeared in 1951, and within a few short years the bass guitar created a seismic shift in popular music thanks to a number of forward-thinking musicians. Chief among these bold explorers is female bass player Carol Kaye, born in Everett, Washington in 1935.

Initially, on the fast track to success as a jazz guitarist in Los Angeles, Kaye was thrust into the lucrative Hollywood studio scene at a 1957 recording session with Sam Cooke. One morning at Capitol Studios the bassist didn’t show up, and Kaye spontaneously picked up a “Fender bass” and took over. Plectrum in hand, she immediately seized upon the creative potential of the instrument and became an indispensable member of the now-famous “Wrecking Crew” collective of session musicians. The Crew defined the sound of American popular music in the 1960s, but Kaye’s musicality, creativity, and distinctive tone (the result of flatwound strings and a pick) helped redefine the bass guitar’s role in the rhythm section. Some might not know Carol Kaye’s name, but if they’ve ever been near a radio (or a TV set) you’ve heard her bass playing. Here is some of her signature work.

Where to begin? One of the hallmarks of Brian Wilson’s 20th-century pop masterpiece is the use of unorthodox harmonic structures, defined by bass notes that are often not the root of the chord. But his radical musical experiments also needed a strong, supple rhythmic backbone. Kaye (along with upright bassist Lyle Ritz) remained fully committed to Brian’s vision, breathing life into his songs with her impeccable timing and melodic instincts. Start with “God Only Knows,” “Let’s Go Away For A While,” and “Wouldn’t It Be Nice,” and then get back to me.

Having started out as a guitarist (and occasional bass guitarist) with the Wrecking Crew, Glen Campbell’s career as a country-pop superstar kicked into high gear with his emotional performance of Jimmy Webb’s song inspired by a lone utility worker up on a telephone pole. The sublime performance of Campbell’s comrades in the Crew elevate the tune to great heights, but Kaye’s bass glues it all together: She guides the rhythm section through unexpected harmonic twists and turns and gets some delicious syncopated fills in the intro.

“Glen Campbells Other Life As A 60’s Session Star”

Though “River Deep” is credited to “Ike And Tina Turner,” it’s actually a full-on Phil Spector production with Tina’s voice on top. (Ike was reportedly paid $20,000 to stay out of the studio and give Spector full control.) It’s the quintessential example of Spector’s legendary “Wall of Sound,” with nearly two dozen of LA’s finest pounding away and drenched in the reverb of Gold Star Studios. Consider this the musical equivalent of a white water rafting trip, but the two elements that cut thru the sonic storm are Tina’s searing vocals and Kaye’s relentless, plectrum-driven bass guitar.

Nancy Sinatra’s “These Boots Are Made For Walking” (1966)

Frank’s eldest daughter had enjoyed moderate success as a recording artist in Europe and Japan before scoring her first number one in the U.S. with “Boots.” The famous string bass glissando that punctuates the choruses was played by legendary L.A. bassist Chuck Berghofer, but it’s Kaye’s picked bass guitar that gives “Boots” its rhythmic integrity and rock-solid foundation, driving home a lyric about independence and female empowerment.

This iconic ballad — and title track to the film of the same name — won both the 1974 Academy Award for Best Song and the 1975 Grammy Award for Song of the Year. A thick, lush orchestral arrangement by Marty Paich envelops Barbra’s legendary bravura performance, but once again Kaye effortlessly gives the song its backbone. She keeps it simple and functional during the verse and refrain, but in the bridge (“Can it be that it was all so simple then…”) Kaye fills the spaces in Barbra’s vocal phrases with buoyant, high-register melodic fills that punctuate the emotional weight of the lyrics without ever sacrificing the groove. Listen with headphones for the full effect.

Though the classic TV show first aired in 1966, its irresistible theme song was released as a single the following year. The piece still evokes great drama and suspense, thanks to Kaye’s thunderous bass doubling the lower brass on one of the most instantly recognizable musical motifs ever written in 5/4 time.

3 comments on “Carol Kaye, The First Lady of Bass Guitar”