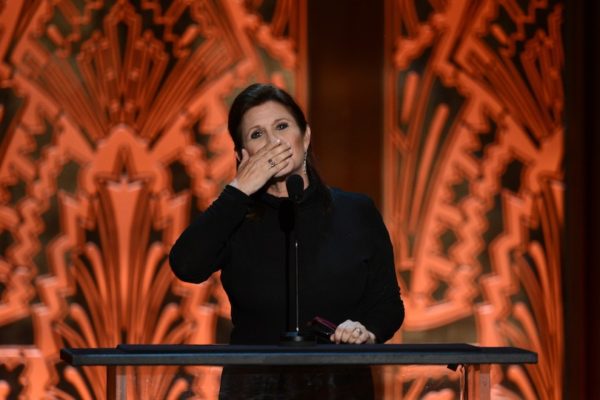 German Director Wim Wenders once wrote quite eloquently about the ability of film to rescue the existence of things. Though Wenders was no fan of Star Wars, this notion now comes to mind in relation to one of that movie’s stars, Carrie Fisher. Barely a year after Fisher revived her iconic role as Princess Leia Organa in the Star Wars sequel The Force Awakens, Fisher herself is gone yet paradoxically very much still with us.

It says a lot about the past year that here in December the death of a musician, writer or actor might shock us, but it can’t truly surprise us. Intellectually speaking, of course we know that 2016 isn’t a conscious entity out to destroy the touchstones of our youth. Emotionally speaking, though, the script was drafted when David Bowie and Alan Rickman – neither of whom were particularly old – died within a week of each other. It stung so much, because they weren’t museum pieces, living purely in our collective past, but rather vital artists with more to offer.

So it was with Fisher as well. Having established a successful second career as a novelist and screenwriter, her supporting role in the current Anglo-American comedy series Catastrophe is a perfect vehicle for her sardonic delivery and an effective reminder that adventures in “a galaxy far, far away” were only ever a part of the story. Then again, even her most famous role also had more to offer.

When Leia was reintroduced in The Force Awakens, she’d forsaken her royal title in favor of the rank of General, leading a resistance movement even scrappier than the Rebel Alliance of the original Star Wars movies. On the one hand, it’s amusing that having become a “Disney princess” — both literally and figuratively — she would immediately adopt a different role. On the other, the change attests to the fact that the title of Princess was always more about giving the story a mythic atmosphere than defining the character who held the title.

The original Star Wars trilogy may have been lacking in gender balance, but that doesn’t diminish Leia’s importance to the saga. It’s very telling that when the original line of Star Wars action figures was released, not only was Leia one of the very first, the figure’s accessories included her own blaster. She wasn’t a passive figure just waiting to be rescued by Luke or Han but rather an active participant in events – in short, a fighter.

In that respect, the character of Leia is reflective of the woman who played her. Fisher struggled with mental illness, substance abuse and — like her famous alter-ego in the current movie – even her own past. The latter element certainly comes through in the scenes she shares with Harrison Ford in The Force Awakens. Seeing them portray a shared history that mixes the good and the bad is undeniably affecting. It’s also a reminder that most of us don’t have the hair we used to and that this can be a good thing.

All joking aside, one element that makes Fisher’s passing feel strange is knowing that her most famous character’s story is far from over. In addition to Star Wars books yet to come, it’s been reported that she had already finished filming the next episode in the series. At some point after that, the producers will have to decide how to address her onscreen fate, a question further complicated by a Star Wars film in which Leia barely appears.

In the two weeks since the movie Rogue One opened in theaters, there’s been a lot of discussion about the propriety of using CGI to turn back the clock for actors and characters alike. While much of it focused on the resurrection of the late Peter Cushing’s villainous Grand Moff Tarkin, the fleeting appearance of Princess Leia using Carrie Fisher’s 1977 likeness and a bit of repurposed dialogue also struck some as off. Fisher’ death almost certainly isn’t going to lessen that debate.

Still, it’s worth considering that George Lucas conceived of Star Wars as a kind of modern mythology. Seen in that light, cinematic immortality in all its forms – even that enabled by the technological advances Lucas did as much as anyone to encourage – seems fitting. At its best, Star Wars represented a fusion of the human and the technical, and no bit of computer wizardry could have offered Princess…sorry, General Leia Organa immortality without the fundamental contributions of Carrie Fisher herself.