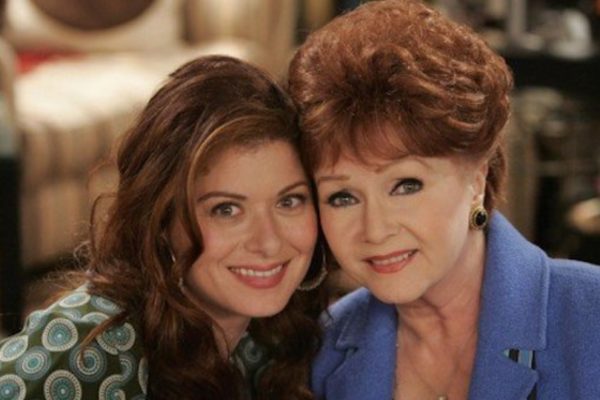 If triple-threat singer-actor-dancer Debbie Reynolds had done nothing but Singin’ in the Rain (arguably the greatest movie musical ever made), she would’ve earned her star on the Hollywood Walk of Fame and then some. Heck, if all she had done was be the mother of trailblazer Carrie Fisher, you’d have known she’d done something right! But the late screen legend Reynolds, who passed away on December 28, 2016, was much more than either of those formidable accomplishments. She was one of those few talents who kept re-emerging to remind us of just how good she was. In the last year alone here at CultureSonar, we covered three cultural phenomenons of which Reynolds was a major part. We’ll miss you, Debbie Reynolds!

1. Will & Grace
Reynolds had a recurring role on the series as Grace’s mom. (Emmy nomination: 2000)

2. Al Brooks’ Mother
As the title character here, the actress gave one of the best performances of her career. (Golden Globe nomination: 1996)

3. Miyazaki’s Kiki’s Delivery Service
Yes, she was a voice actress, too, and dubbed the part of Madame in the English version of this animated classic.

P.S. Don’t miss our tribute to Debbie Reynolds’ daughter Carrie Fisher or our In Memoriam post honoring some of the musical legends who also passed away this year.