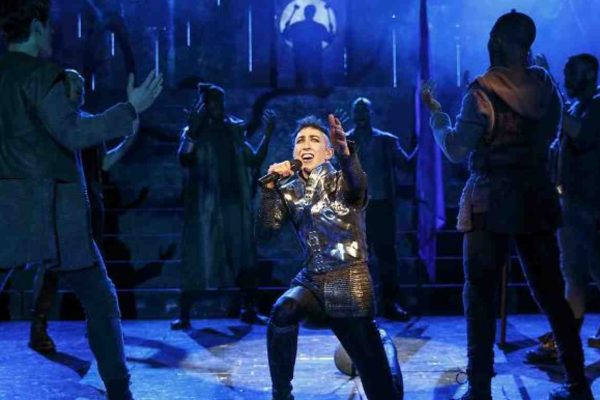 Talking Heads front-man and solo artist David Byrne is embarking on his sophomore musical theater effort, in a piece based on the 1431 trial of Joan of Arc, slated to debut at New York City’s Public Theater on Valentine’s Day 2017.

Byrne’s first rock musical, Here Lies Love, gaped at the life of Imelda Marcos through a disco/club scene lens. The award-winning musical ran twice at the Public in 2013 and 2014 and once at London’s National Theater in 2014. Adapted from an album Byrne co-wrote with Fatboy Slim, Here Lies Love was described in its program as “a revolutionary musical experience” and had Byrne’s high-concept fingerprints all over it, with undertones of the Talking Heads rounding out any unfamiliar territory.

Critics reveled in its gleeful departure from standard theater conventions. Lauded in the press, variously, as artful, funky, interactive, immersive, dazzling, thought provoking, beautiful and joyous, Here Lies Love firmly established Byrne as an innovator in the live theater space. The whole Here Lies Love gang is reuniting for Joan of Arc: Into the Fire, including Director and two-time Tony nominee Alex Timbers, to tell the story of an illiterate, clairvoyant, cross-dressing, rabble-rousing 19-year-old girl who led a defeated French army into victorious battle against the English and was burned at the stake for her trouble. In Byrne’s version, her witch trial takes the form of a rock concert. He wrote a brief description on his website:

“Like Here Lies Love, this one is almost all contemporary music with very little spoken text, though this time around the music is more anthemic and ‘spiritual’ rather than the clubby disco grooves of Here Lies Love…On stage, imagine a singer—a contemporary young woman—backed by her inspired band, ultimately immolated at the end of her concert.”

Lin-Manuel Miranda may have to start looking over his shoulder. Born from David Byrne’s avant-garde mind and told through his complex melodies and brilliant lyrics, Joan of Arc: Into the Fire may position Byrne as a contender for the historical musical theater crown.

Photo Credit: Joan of Arc: Into the Fire by Joan Marcus