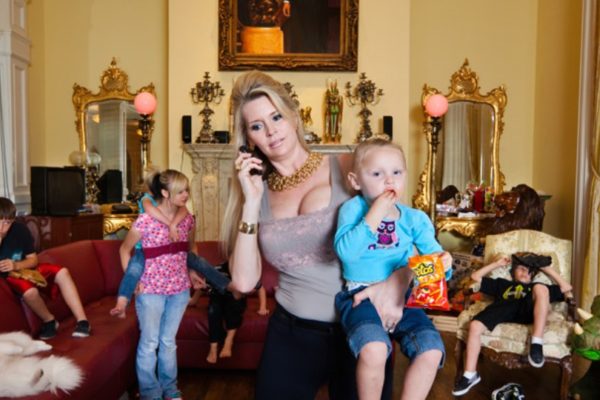 Thanks to modern technology, connecting with your parents, your siblings, or whatever constitutes your modern family of friends doesn’t require leaving the comfort of your home. Which is another way of saying that now, this summer, is the perfect time to reconnect — perhaps Netflix and chill — with your loved ones, starting with your family. We know you’re thinking, “Even if I can get everyone in the same place, there’s the choosing of the actual movie.” We hear you. Better yet, we’ve got you. Our recommendation? Start with the genre! Once that’s settled on, we’ve got a film that works for multiple generations and avoids torrid love scenes.[amazon template=right aligned image&asin=B00DYQ1TKM]

1. Drama: 42
Even if some members of your clan aren’t sports fans, this biopic of Jackie Robinson (an excellent Chadwick Boseman) is guaranteed to make even the least emo of you feel all the feels. Commemorating a crucial moment in American sports history, the story of this baseball legend boasts an excellent cast, including an almost unrecognizable Harrison Ford as renowned General Manager Branch Rickey. (Now streaming on Amazon)

2. Comedy: Hello, My Name Is Doris
Having missed out on most youthful experiences, watching Sally Field’s character of Doris follow her heart with her attraction to her younger co-worker (Max Greenfield) is both heartwarming and entertaining. From her romantic fantasies to her winning over of the hipsters in trendy Williamsburg, you’ll like Sally Field — really, really like her — or even if you or one of your family members doesn’t, you will after watching this. (Now streaming on Hulu)

3. Foreign Film: Shower
Set in a traditional bathhouse in a rapidly industrializing China, this flick kicks off with an estranged son (Piu Cunxin) who gets a cryptic postcard from his younger brother Damin (Jiang Wu) suggesting their father (Zhu Xu) is ill. If your family runs a business (or frankly has tried to do anything cooperatively), you’ll laugh as you witness family dynamics upended by outside influences. Then again, when the patriarch intervenes to get the marriage of two customers back on track, you’re also reminded of the importance of perseverance and patience with those you love. (Now streaming on Amazon)

4. Documentary: The Queen of Versailles
This fascinating doc follows the financial downfall of an obscenely wealthy couple (Jackie and David Siegel) as their quest to build their dream house is suddenly undone by the US economy crash of 2008. Watching the grim financial reality of the Siegels — and their kids — is both squirm-worthy and entertaining. Bonding via schadenfreude laughs guaranteed. (Now streaming on Netflix)

5. Classic: His Girl Friday
Watching crackerjack reporter Hildy (Rosalind Russell) match ex-husband/editor Walter (Cary Grant) word for word and wit for wit is a blast from beginning to end. Though the story sounds pretty typical for any screwball comedy — Walter tries to woo back Hildy by appealing to her professional ambitions — the dialogue is sharply subversive even by today’s modern standards. The movie has the added benefit of sparking a non-contentious conversation on how far women in the workplace have come —and not. Laughs and an engaging convo? We’re in. (Now streaming on Amazon)

Photo Credit: Publicity still for The Queen of Versailles

0 comments on “Stream Some Quality Time With Your Family”