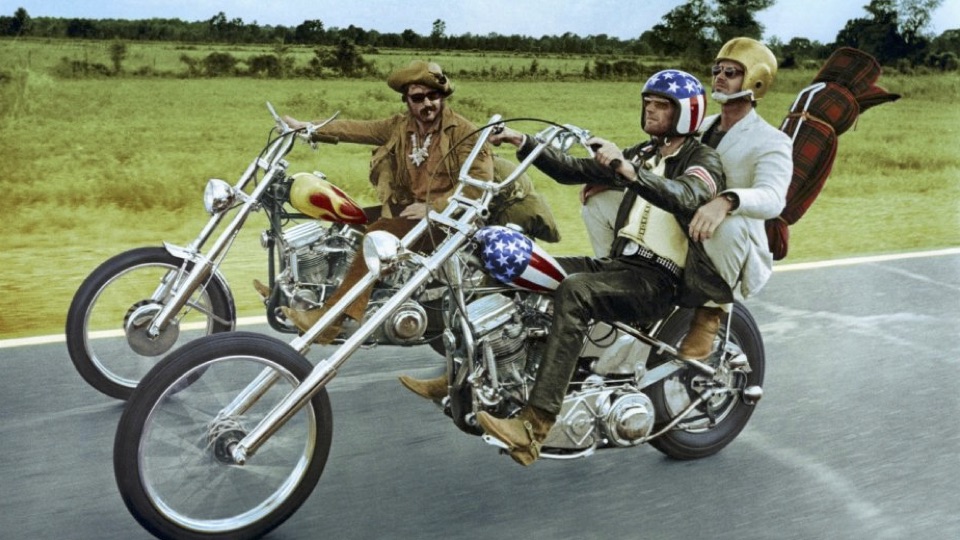 The story goes that Bob Dylan was reluctantly involved in the Easy Rider soundtrack, gave Dennis Hopper a note that ends with the line “flow, river flow” and said, “Give this to McGuinn, he’ll know what to do with it.” Roger McGuinn was given the note and wrote the theme to the movie, “The Ballad of Easy Rider.”

There will be more on Dylan’s involvement in the movie’s soundtrack, with another assist by McGuinn, later in this look at the film’s music as its 50th-anniversary approaches. The movie made a profound impact for its portrayal of Peter Fonda and Dennis Hopper as the drifter outlaw bikers, riding through the jaw-dropping southwest landscape, portrayed spectacularly by cinematographer Laszlo Kovacs, to songs by Steppenwolf, Hendrix, and others. But underneath those iconic images is a movie with a stark, complex look on what freedom is.

It was one of the first movies to use a soundtrack with most the of songs not written specifically for it. Hopper, who was the driving force of Fonda’s idea for the movie, chose the music primarily from songs he was hearing on the radio on his way to editing the film. Crosby, Stills and Nash had been considered to do the soundtrack, but Hopper thought the songs chosen served the movie better. In the commentary on the movie’s Blu-ray release, Hopper says he thinks of the songs and words as part of the story’s narrative.

Related: “The Top 5 Dylan Covers by The Byrds”

The movie begins as Hopper, as the hyper Billy the Kid, and Fonda, as the laid-back Captain America, buy drugs in Mexico and then sell them in L.A. to an interested party played by Phil Spector. There is minimal dialogue in these scenes mostly drowned out by the roar of airplanes. After the deal goes down, the opening chords of Steppenwolf’s “The Pusher” blare out as the two begin their journey. It establishes an authenticity to the film with the audience knowing that music is made by a real band instead of studio musicians commissioned by the producers to sound like one.

Hopper doubles down with Steppenwolf’s “Born To Be Wild” as they continue their journey. The convergence of the stunning landscape and music continues with the Byrd’s version of, “I Wasn’t Born to Follow” and the Band’s “The Weight” (in the movie the song is performed by The Band, while on the soundtrack album it is performed by the band Smith.) When they enter a commune, a theater troupe is performing an old traditional song, “Let Your Hair Hang Down,” playfully taunting a jumpy Hopper.   It seems that Fonda is considering staying at the commune, but the restless Hopper says they have to split.

Any discussion of Easy Rider would be incomplete without discussing the breakthrough role of Jack Nicholson’s portrayal of George, the earnest, small-town, alcoholic lawyer who gets the two out of a trumped-up disturbing the peace charge. George joins them on their journey to New Orleans, wearing his old football helmet, clowning on the back of Fonda’s chopper to “If You Want To Be A Bird” by the Holy Modal Rounders. Later, “Don’t Bogart That Joint” by Journey of Man is heard after Nicholson does just that as he blows Billy’s mind with a pot induced discussion on the existence of aliens. They cross the Louisiana border to “If Six Was Nine” by the Jimi Hendrix Experience. The metallic-sounding guitar merges perfectly with the crossing of the steel bridge.

After they tragically part ways with George, they continue their trek to Mardi Gras where they stop in the House of Blue Lights, the brothel that George recommended to them. There they hook up with two girls played have by Karen Black and Toni Basil and eventually drop acid together. During these scenes, The Electric Prune’s (yes, that is really their name) “Kyrie Eleison,” and some street musicians’ songs are used. It includes a harrowing performance by Fonda at a gravestone, inspired by his tumultuous relationship with his real-life mother.

After their encounter at Mardi Gras, the two head out on the highway again and the soundtrack’s story goes back to Bob Dylan. Hopper wanted to end the movie with Dylan’s, “It’s All Right, Ma.” Dylan thought that would be too much of a downer and gave the OK for the song’s use only if it was not used at the end. Unable to acquire the licensing of Dylan’s version of the song, once again McGuinn was called on to assist, quite effectively, with a country blues version of the song that includes superb harmonica backing by fellow Byrd, Gene Parsons. For the closer, Dylan wrote the lines given to McGuinn that evolved into “The Ballad of Easy Rider.”

Related: “A Fire Destroyed Old-Style Master Tapes – And Why We Should Care”

Easy Rider’s portrayal of the allure and perils of Billy the Kid and Captain America’s pursuit of freedom and the American Dream are unforgettably linked to the film’s influential soundtrack.

Dennis Hopper, Peter Fonda and Jack Nicholson in a scene from Easy Rider