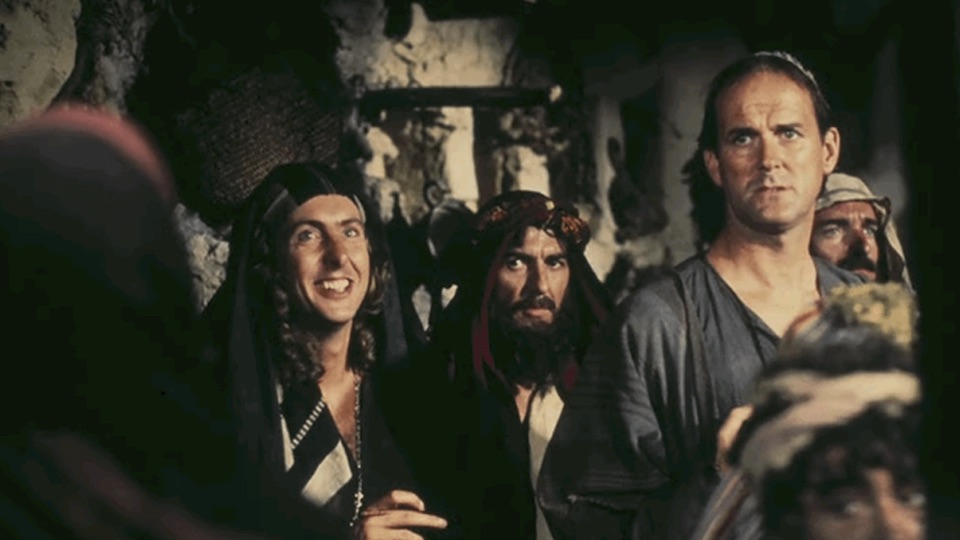 It’s always the quiet ones, eh? Where John Lennon and Paul McCartney (even Ringo!) seemed content hogging the limelight, George Harrison was suited to the world that existed outside of it. And though it was his guitar that gifted the world some of its most indelible hooks, it was his involvement with Handmade that presented the eighties with the face of the British film industry.

Like many wonderful things in life, Handmade Films grew from accidental circumstances. Harrison, who felt Monty Python continued the spirit of The Beatles through the seventies, had struck a long-lasting friendship with Eric Idle. Querying the development of their latest project, the guitarist was dismayed to hear that their funding had been cut short. Drawn to their script, Harrison personally financed the film, by mortgaging his house as collateral. From then on, Harrison stood to help artists, including pals Terry Gilliam and Bob Hoskins, in getting their projects out of the drawers and onto the big screen. From 1979 to 1990, Handmade Films stood as a bastion of free art, free principle, and free love.

Life of Brian (1979): When movie mogul Bernard Delfont pulled the funding from under their legs, Harrison came in to finance the picture. The gesture was one the Pythons recognized — Idle called it the most anyone had ever spent on a cinema ticket– but their work was one Harrison could deeply relate to. Beneath the religious trappings that caused the film to be banned in many countries, came a story of a man caught in the crossfires of tremendous success. Idle, meanwhile, shot back at Delfont in the saltiest way he could; but you’ll have to listen to “Always Look On The Bright Side Of Life” to find out.

The Long Good Friday (1980): A fondly remembered entry in the list, it’s a miracle that the film ever saw the light of day. Writer Barrie Keefe, who’d lived around East End London mobsters as a youth, subverted the classic gangster tale with an impresario aching to save face against the rise of the IRA. As a consequence, the film, though completed, faced serious delays, and only through the grace and savings of one Harrison did the world finally get to watch the film in 1980. And yet Harrison, who espoused peace and love in the sixties, had misgivings about the film. “I’ve actually spoken to George about The Long Good Friday,” actor Bob Hoskins recalled. “He said ‘if I’d have known it was that violent I wouldn’t have taken it on.’”

Time Bandits (1981): Terry Gilliam’s most child-friendly movie –well, child friendly by Gilliam standards– this fantasy adventure collated one of the most impressive casts in a Handmade feature. Monty Python stalwarts John Cleese and Michael Palin lead an ensemble that boasts Sean Connery, Shelley Duvall, and Ralph Richardson among the listings. The film’s anarchic humor was one that matched Harrison’s, and the guitarist is heard singing on the jaunty “Dream Away” during the film’s credits.

A Private Function (1984): Although Graham Chapman bagged the lead role in Life of Brian, there was no shortage of talent among the Python troupe. John Cleese, as he showed so beautifully in Fawlty Towers, could illustrate the ingrained rancor of the archaic Englishman, while Eric Idle, a chameleon mimic and songwriter, mustered several voices/characters during the excellent The Rutles-All You Need Is Cash.

Related: “Everything Fab Four: The Rutles At 40”

Meanwhile, Michael Palin, a thespian later turned travel documentarian, proffered his greatest performance from Alan Bennett’s sparky prose. Situated in post-war Britain, temptation proves too much for Palin’s Gilbert, when the prospect of a tidy-looking pig comes a-knocking. Watch out for a pre-Downtown Abbey Maggie Smith quipping about “intercourse”– yeah!

Water (1985): Television writers Dick Clement and Ian La Frenais (The Likely Lads, Porridge, Auf Wiedersehen, Pet) were enticed into making films, and although this is definitely the weakest entry to make the list, it is notable for reuniting George Harrison and Ringo Starr on the big screen. Performing beside Billy Connolly, the two Beatles slide through a punchy music hall number, calling attention to the world’s myriad, malevolent inequalities. It might not have changed the world, but rock and roll was a subject Clement and La Frenais would return to on the Irish classic The Commitments.

Mona Lisa (1986): No, this has nothing to do with da Vinci- although Phil Collins, heard singing on the soundtrack’s sickly “In Too Deep,” had become something of a modern-day da Vinci, with all his drumming, singing and songwriting duties – but it’s definitely detailed in palatable, artful strokes. Hoskins is back, this time bagging an Oscar nomination for himself, delivering one of the most thoughtful performances of his career. Contrasting Hoskins’ whimsical role is Michael Caine, relishing the chance to play the bad guy for once.

Withnail and I (1987): Coming hot on the heels of the poorly written, but stupidly expensive, Shanghai Surprise, comes Bruce Robinson’s biting, low-key tragicomedy. Worlds away from the dazzling colors The Beatles and The Rolling Stones flaunted during the decade, Robinson presents the sixties as a cutting, cold era of pub beatings, drinking, and exorcisms. Granted, the film splashes audiences with musical vignettes (Harrison granted the filmmakers permission to use “While My Guitar Gently Weeps”, with all its blistering glory), but the film ultimately ends on an unusually somber note. And if Richard E. Grant’s heart-wrenching, closing monologue isn’t enough to reduce you to tears, then here’s ten bucks here with your name on it!

Track 29 (1988): Your eyes are not deceiving you: that is Gary Oldman in front of you! A spectral, cerebral drama, the film wades from the childlike to Christ-like in seconds. Don’t Look Now director Nicolas Roeg returns to a genre that owed more to him than he did to it, delivering a sparkling comeback few have since countered.

The Ragged Rawney (1988): This is the third Bob Hoskins film to make the list, and although it doesn’t quite match the power set by the other two, it does offer a microscopic insight into the world that nomadic gypsies inhabit. Decades before Peaky Blinders brought the radiance out of The Travelling Community, Hoskins – in his directorial debut – portrayed a commune free from foibles, failings, and fixtures of the materialistic eighties. The film’s mantra was one that echoed Harrison’s, as the spiritual guitarist spent weeks, years even, away from the cameras that seemed determined to follow him.

Nuns on the Run (1990): It started with Eric Idle, so it’s only fitting that it should end with him. However sour the relationship with Denis O’Brien had become, this was a cosmic circularity that would have appealed to Harrison’s soulful side. The film, one of the last glorious cross-dressing movies, squares Idle off against Robbie Coltrane, in a romp that holds up well on both of their CV’s. Typical Handmade: they don’t go out with a bang, but a jolly good laugh!