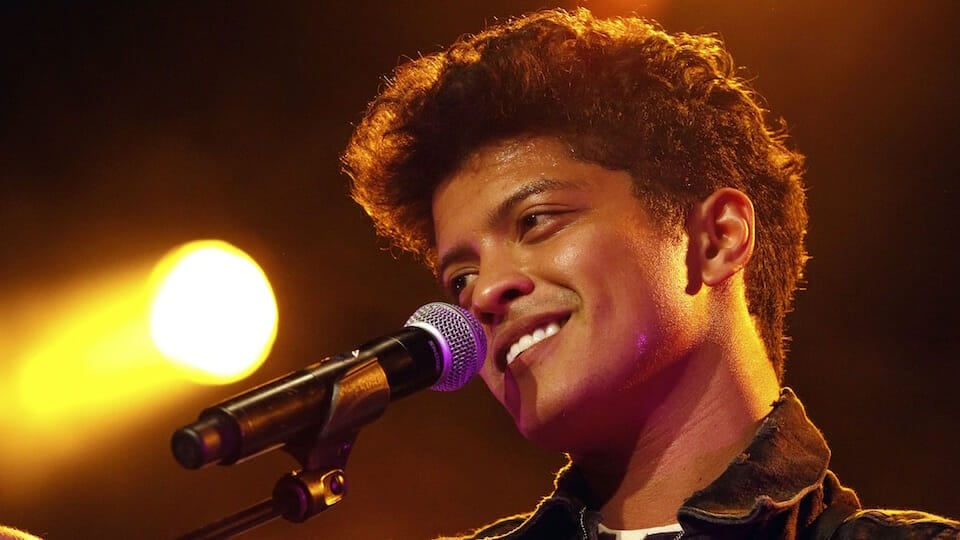 Bruno Mars is about as popular as a pop star can get these days — selling over 100 million records worldwide. Yet he’s only released three albums. How’d he do it? Well, each LP has been certified “Platinum” and yielded an astounding 15 songs that individually rated Platinum as well. The key? Mars takes a love of throwback R&B then injects a modern twist resulting in fresh tunes with a retro sound. If you love Bruno Mars’ songs but long for more, let us refresh your memory of similar classics that merit dusting off the vinyl.

Mars’ affinity for the King of Pop can be found in his overall sound which can definitely be spotted in this huge hit from his debut album Unorthodox Treasure. The Mars’ song combines a series of quick jazz chord changes and a synth warble after each line in the chorus, akin to Jackson’s style-and-synth callback on “Pretty Young Thing (P.Y.T)” from Thriller. Note the equivalent use of bass slaps to bring on the funk. As hat tips go, it’s a nice one.

“The 10 Best Michael Jackson Songs You May Have Never Heard”

Given the Mars title adds but one single word to the Brian McKnight one, we’re assuming the debt here is acknowledged. In case you forgot, McKnight made his name in the ‘90s, crooning R&B ballads like “Back at One” and “Anytime.” With “Versace on the Floor,” Mars takes a page from his predecessor via simple opening synth keys followed by earnest lyrics about pleasures ahead. Interestingly, “Versace on the Floor” shows more restraint in both wording and orchestration than “On the Floor.” That song slathers on the strings and unveils phrases that convey not just getting undressed but getting some serious action.

“Finesse” is one of those songs that may cause déjà vu because it so clearly recalls the “New Jack City” hits (like Bell Biv DeVoe’s “Poison”) that Mars has noted as influences.  But this one has us thinking of the Gloved One’s “Remember the Time” from Dangerous.  The crackling synth snare leads to an organ accompaniment and a smooth chorus that allows you to literally sing the words “Do you remember the time…” Try it.

“Perm” is all about James Brown, from the scat entry to the jangly rhythm guitar to the funky horn section. Purportedly, Brown wrote “Get Up Offa That Thing” after performing in Fort Lauderdale where, despite his band’s tight funk, the audience just sat and listened. And while Mars doesn’t literally order you to get up off your butt, his rhythm section and well-timed screams are basically telling you to do so.

“If You Dig Curtis Mayfield Then You May Like…”

This is technically a Mark Bronson arrangement featuring Bruno Mars. If you want to be even more specific, you could call it a Bronson-Mars collaboration with The Gap Band — now credited as fellow songwriters. But it’s so much more than that. Partly because while you definitely can hear “Oops Upside Your Head” in “Uptown Funk,” you can also catch shades of Collage’s “Young Girls,” a song which didn’t chart. And while the latter band isn’t credited (having settled out of court), “Young Girls” has vibes you’ll likely dig, too.