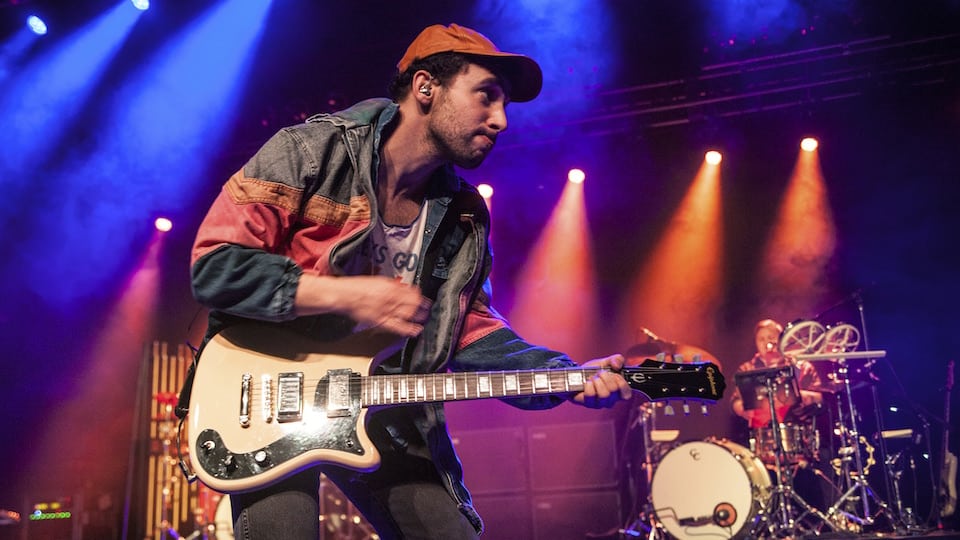 To say that Bleachers frontman Jack Antonoff is having a busy year (or two) is like saying The Ramones once toured a lot. In short: a major understatement. After all, Antonoff produced/wrote part of Lourde’s Melodrama and Taylor Swift’s Reputation, and contributed to St. Vincent’s Masseducation and Pink’s Beautiful Trauma. He also created the soundtrack to Love, Simon and released his second album with his band, Bleachers: Gone Now. So yeah, he’s been busy. Yet for someone who works this hard, Antonoff is kind of a homebody who stays grounded by drawing inspiration from the suburbs of New Jersey where he lived for most of his life.

Indeed, his home life is so central to his work that he recreated his childhood bedroom as part of an art installation for his tour last summer. In a 2017 interview with Entertainment Weekly, he called the associated album Gone Now an exploration of “moving on and how we can’t take it all with us.” That said, Antonoff is certainly trying to do so on some level as both Gone Now and his songs for Love, Simon revive his youth through synth-pop instrumentation with an ‘80s feel.

See Related Content: “10 Albums That Defined Being a Teen In the ’80s”

Unquestionably, Antonoff ‘s ability to capture all the “feels” of his generation made him the perfect choice to produce Love, Simon’s soundtrack. For while his first experience of pop stardom may have come with his earlier band fun.’s “We Are Young” (2012), his work with Bleachers has taken him to a whole other level of goodness.

Any coming-of-age flick hoping to become a classic requires a great soundtrack to amp up the little moments. Remember Reality Bites and Pump Up the Volume? And while Antonoff, a straight man, might not share the coming-out experience of Simon, he does have a deep understanding of the universal feelings experienced by many teens. As he noted in Entertainment Weekly,”Growing up in Jersey was like ‘desperately trying to understand yourself in a loop, where everybody knows everything about you and you feel like you have to bust out of yourself.’”

Antonoff captures that need to break free of your cul-de-sac with the music that accompanies the scene where Simon picks up his friends on the way to school: Bleachers’ “Roller Coaster” starts out in a rush of catchy beats and lyrics that get you on board for Simon’s journey post haste. But the soundtrack is not just “My Sharona” sing-alongs by a long shot. Both “Wild Heart” and “Alfie’s Song (Not a Typical Love Song)” are infused with a romantic longing rich with references to The Cure, Tom Petty, and in the refrain especially, Cheap Trick. Even the video for “Alfie’s Song” feels retro recalling the fun vibe of Paul Simon’s “Me and Julio Down by the School Yard.”

Getting into Gone Now

Speaking of that Simon ditty, Gone Now’s opener, “Dream of Mickey Mantle,” and its subsequent track “Goodmorning” convey an equally dreamlike nostalgia that also — as Antonoff has been quick to admit — has a “Beatles-y” vibe harkening back to “Penny Lane” with its use of a brass section. Sure, the album hits you over the head with its self-reflection but that’s kind of the point: How can your explore notions of home and what it feels like without going inward really?

The single “Don’t Take the Money” is like a companion piece for “Alfie’s Song” as it also delves into the craziness of love. Once again, Antonoff’s passion for ‘80s synth-pop shines through and results in anthem appeal much like “I Wanna Get Better,” his hit off Bleacher’s 2014 debut Strange Desire. In a video for Rolling Stone, Antonoff discusses the recording process of that album and how he wanted a “frantic” sound for “Don’t Take the Money.” As he shouts his chorus, demanding the listener to shout along with him, you’ll have a hard time not getting caught up in his frenzy.

Other memorable cuts off that album include “I Miss Those Days” which is almost like hearing Joe Cocker’s version of “With A Little Help from Your Friends” as it wistfully looks back at our collective “wonder years.” The thing about being a teenager growing up in the New Jersey suburbs is that you can see New York nearby, but it always feels like a world away. Antonoff and the Bleachers capture that feeling perfectly with this album. Relatable lyrics, irresistible hooks, and join-in choruses you can shout to make Gone Now one of those albums worth revisiting, just like the memories of your childhood room.

Photo Credit: Singer/guitarist Jack Antonoff of the Bleachers performs during the 1065 The End Not So Acoustic Christmas at The Fillmore Charlotte on November 28, 2017, in Charlotte, North Carolina. (Photo by Jeff Hahne/Getty Images)

1 comment on “Jack Antonoff, Bleachers, and the “Feels” of Youth”