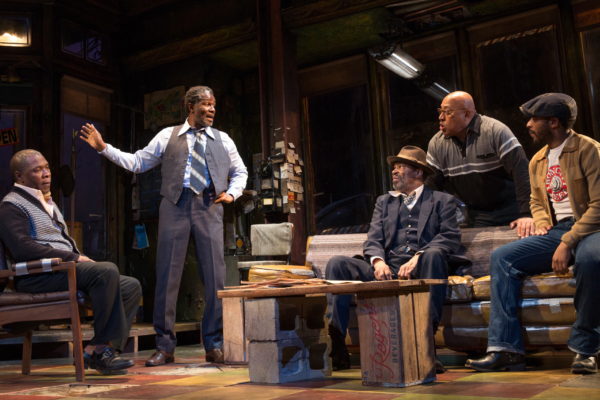 There was a lovely moment at the Screen Actors Guild Awards this year when actor Denzel Washington, clearly surprised by his win for Fences — a film he’d also produced and directed, mind you — rattled off a litany of great American playwrights, ending with the man responsible for his Fences screenplay. “Tennessee Williams, Arthur Miller, Eugene O’Neill, Edward Albee, August Wilson…” Denzel’s reverential list was akin to a televised beatification, a celebratory proclamation that Wilson’s place in the canon had been officially secured. About time, too, since Wilson’s series of ten plays reflecting the African-American experience across every decade of the 20th century qualifies as one of the towering literary achievements of the last 50 years.[amazon template=right aligned image&asin=1468314491]

But with all due respect to Denzel’s roundly lauded movie and without forgetting Hallmark Hall of Fame’s equally acclaimed, Emmy-nominated The Piano Lesson from two decades back, it’s on the stage where Wilson’s talents truly shine at their brightest. Just look at the current gold-star production of Jitney on Broadway. Directed by Ruben Santiago-Hudson, an actor who won a Tony for his performance in Wilson’s Seven Guitars, the present revival is truly a testament to what makes Wilson so damned great. For Wilson is a born storyteller who clearly believes that everyone has a tale to tell and that every tale is interconnected. As a result, he’s also an actor’s playwright, a writer who makes true Stanislavski’s old maxim “there are no small parts, only small actors.” In Jitney, every member of the cast has a moment in the spotlight. And when they get there, they shine.

For Jitney, perhaps more than any other Wilson play, is an ensemble piece. And although, like Fences, there’s a father-son conflict at its center, this early work of Wilson’s is actually first and foremost about a community — specifically one formed around a car service in Pittsburgh’s Hill District sometime in the ’70s. Because of its scope, we hear not just a few versions of the tragic murder that has led car service owner Becker (John Douglas Thompson) to disown his son Booster (Brandon J. Dirden) who’s just been let out of prison but also the nostalgic recollections of Fielding (Anthony Chisholm), an alcoholic who once was a successful tailor, the bemused memories of Shealy (Harvy Blanks), a numbers-runner haunted by a woman from his past, and the moral code of Turnbo (Michael Potts), the in-house gossip who was raised by his grandmother and who could probably tell disparaging anecdotes about anyone he’s ever met and a few he hasn’t.

Every man is a collection of stories in Wilson’s world. As for the women, Jitney‘s sole female character, Rena (Carra Patterson) calls to mind the oft-repeated phrase of late “The future is female” as Rena’s extended dialogue with her hardworking boyfriend (Andre Holland of Moonlight and Selma fame) contains some of the play’s most memorable exchange of ideas. For while Becker and Booster are doomed to never reconcile, this young couple provides Wilson with his opportunity to show how much sweat equity is required to make a relationship survive then thrive. In brief, it’s a lot of listening, a lot of opening up, and a lot of owning our own mistakes. This couple’s story, which quietly nods to Lorraine Hansberry’s A Raisin in the Sun in many ways, is really the soul of Jitney, as it gives us hope that if we put our hearts in it, a better world is definitely possible. We just need to take responsibility for it and do the work.

PS. Can’t make it to NYC? You can stream Broadway wherever you are. Read more in our post BroadwayHD: Now Streaming the Magic of Theater. And for more on Broadway’s biggest phenomenon these days, check out our post On Having a #Hamilcrush at 40.

0 comments on “On Broadway, August Wilson’s “Jitney” Is Something to Prize”